Tweet
Share
Pin3
Share
3 Shares
I was stoked when my friend and I decided to go on a 2 week road trip in Oregon. I’d wanted to go for ages, mainly because I love green spaces and mountains. And, well, it seemed like Oregon had both of those things.

I also think I have the opposite of the typical SAD (seasonal affectiveness disorder) in the sense that I feel quite upset if there aren’t enough rainy/cloudy days during the fall and winter.

Don’t get me wrong, I dig the sun, but my favorite weather consists of grey, cloudy days. Everything just seems more magical and epic and I feel so inspired to create and be creative. Anyone else feel the same??? Or am I alone in my love for all things NOT sunny?

Oregon basically felt like the American version of Ireland – it was so green my eyes hurt but in the best way. I haven’t been to Washington yet (jk I just got back from Seattle), but I’m guessing it’s Oregon x10.

Originally, we were thinking of doing one week in Oregon and one in Washington, but after doing more research realized there was SO MUCH to see in Oregon that we would just do the whole two weeks there. Washington I’ll get to ya eventually!

Helpful Note: In Oregon, they pump your gas for you! Lazy points for meeeee. I would probably move there just on that fact alone…But anyways, just be prepared. I did not realize this and was semi-freaked out when it was pouring rain, we stopped for gas, there was no one else around, and a guy immediately walked over and stared at us…

Here’s where we stopped along our road trip in Oregon!

Our first stop was McArthur Burney Falls! Eeeek I’d been wanting to visit since forever ever and I was so freaking happy to finally see this epic ass waterfall. You can see the falls directly from the parking lot, and in fact I think I only walked about 5 minutes to get this photo.

A short, easy walk takes you down to the bottom.

You do have to pay to park, and as of August 2020 it’s $10 per vehicle. For more information, visit the McArthur Burney Falls State Park page on Parks.ca.gov.

THEN on to Crater Lake National Park! It just so happened that the weather decided to shit all over our plans and SNOW (yes, SNOW! In JUNE) but it ended up being really nice, actually.

My friend from college works for the parks service and they put her and her BF up with the cutest cabin and so we stayed with them for 2 nights. It was really really nice hanging out and talking and laughing and watching the snow fall outside.

We attempted to venture out to look at the lake which unfortunately was pretty fogged over the first 2 days, but on day 3 we got to see it! So so pretty.

And of course we went to the visitor center, because I love love love love-ity love visitor centers. They also recommended grabbing food at Crater Lake Lodge because they have amazing breakfast apparently. However, the views from there are worth just going to look, even if you don’t eat.

Of course you have to pay to enter since it’s a national park – it costs $30 in the summer and $20 in the winter per vehicle. Here’s a list of more fees.

Next we headed to the Umqpua National Forest region and went to Umpqua Hot Springs (so much nakedness – it’s clothing optional, just be aware). It’s about a quarter mile from the trailhead to the pools, but be warned that during the winter when it snows the trail isn’t paved so it adds another 1.5 miles. There is a toilet on site, and it’s $5 to park.

Toketee Falls was our next stop, and you should def hike down because it’s a lot prettier seen from the bottom! It’s only about a half mile down, and a pretty easy jaunt other to the lookout point where you get a great view of the falls. If you’re feeling really adventurous there’s a rope that leads you down to the base of the falls. It’s not advised, as it’s a little dangerous, so do this at your own risk. Parking is free.

We spent the night at a free (yes FREE! We used freecampsites.net to find free places to camp. You can read my post on finding free camping if you want more tips.) campsite about 45 minutes south of Bend. We just found a random forest service road that led us to a spot with some fire rings, so we knew it was legit.

Then we headed up to Tumalo Falls. You don’t even have to do any hiking to see them! We did hike to the top, though, which was about a mile on a paved path. Parking is $5. After we’d had enough time ogling the falls, we drove to Bend to stay with one of my friends. We walked around the downtown area and then went to Pilot Butte (we were lazy and drove but you can totally walk/run/bike/crawl up it!) which I would highly recommend because it’s a super pretty view.

Next day we drove to Smith Rock State Park, and spent a night at the Bivy Campground there (only $5/night!).

I originally didn’t even really want to go (I’m much more of a forest person than a desert one), but I. LOVED. IT.

We saw so much wildlife – a bald eagle on its nest, a snake, Common Mergansers with chicks, Mallards with ducklings, and so many other birds! It’s also a huge climbing destination, so it was cool to watch the climbers do their thannggg.

We hiked Misery Ridge, but instead of going straight up it, we went the back way so it was a little less intense (normally we would’ve done it the other way, but we got to the park a little late in the day and wanted to make sure we had enough time do the hike by sunset – I swear!).

When we got up next morning, we drove out to Skylight Cave (and passed sooo much pretty lupine flowers!) but were too late for the actual skylights. Get there between 8AM and 10AM if you want pretty images with light beams. Parking was free and it was totally empty – we were the only people around! Do be aware that it’s only open from June – September.

When we left Skylight Cave, Google Maps took us up on a super sketchy backroad driving to Koosah & Sahalie Falls!

It was fine for the first 45 minutes and then got super intense out of nowhere. Lots of rocks and holes and hills and we almost got stuck a few times with no service!!

Ahhhh thank goodness we made it out with my car still alive…If you don’t have high clearance and/or a 4 wheel drive (I have a Honda CRV, so it has the clearance but isn’t a 4 wheel drive), I’d highly recommend going back out the way you came, instead of going straight to the McKenzie River area – not worth the sketchy drive!

The falls were flowin’ though! However, they were probably my least favorite waterfalls on the trip – at least Sahalie was. I did enjoy Koosah but thought the other falls we went to were much better. They were pretty easy to get to, though – Sahalie you can see a short walk from your car, and it’s about another mile or so to Koosah.

We set up camp at Cold Water Cove Campground (there are TONS of campgrounds in that area, but they’re all a little pricey – I think ours was $17/night) and then got up the next morning to rain rain rain. We decided to go to the store to restock on foods, get reception, and check the weather but ended up going back after Proxy Falls for the rest of the day because rain.

But side note, Proxy is freaking amazing and beautiful and you should definitely go. One of my favorite waterfalls! You do need a recreation pass to park here.

Blue Pool was gorgeous and really is that freaking blue! It’s a pretty easy hike but I’d recommend getting there early, and trying to go on a weekday if you can, as it gets crowded fast. Do be sure to respect the area, as it’s very heavily trafficked 4 mile out and back trail.

We headed to Estacada to spend the night in a cheap motel (and shower!) and then went to Mt. Hood.

Unfortunately the clouds were covering Mt. Hood most of the time we were there, but it was still beautiful. We also camped there for free! There are sites you need to pay for but also quite a few free ones. They just don’t have a bathroom/showers/water but IMO it’s totally worth it.

We ended up taking a short walk around the lake, and staring at its beauty.

We then headed to Portland and stayed 2 nights. Luckily, we both had friends there that let us stay with them, and also acted as our tour guides which was super awesome.

We also did the Oneonta Gorge hike, which is super cool but I also probably would never do that again. The water is freezing and at one part you have to walk through it up to your midsection. So if you do decide to go, be prepared to get wet. It was gorgeous, though!

In Portland we did all the quintessential touristy things. I would highly recommend:

+ Salt & Straw Ice Cream (try alllll the flavors)
+ Voodoo Doughnuts (apparently Blue Star Donuts is better, but Voodoo has so many fun flavors, and it’s a classic!)
+ Portland Rose Garden (it’s totally free and so pretty!)
+ Drive around the hills and stare at the rich houses
+ Powell’s Bookstore
+ Multnomah Falls (we hiked to the top, it’s only about a mile but it’s a lot more intense than it seems as it’s all uphill!)
+ Eat at McMenamins – it’s a chain throughout the Pacific Northwest (or PNW for short), but each one is decorated differently (and tastefully), and the food is actually really good!

Then we headed down the coast for the next few days. I wish we had more time on the coast – it was beautiful!

Highlights included:
+ Cannon Beach – Haystack Rock is super cool! And has fantastic birding if you’re into that
+ Cape Arago – we did the trail to Nellie’s Cove – so pretty!
+ Samuel H. Boardman Scenic Corridor – SO BEAUTIFUL. MUCH WOW. SUCH AMAZE. Is this the Caribbean or Oregon???? Jokes on you it really is a picture of the Caribbean. Jokes on you again because NOPE it’s Oregon!! Ahhhh. This whole stretch of coast is just amazing. Whatever you do, DON’T MISS IT!
+ All the cute little beach towns (wish we’d stayed a night in an AirBnb! Next time…)
+ Random pretty viewpoints (so many!!)
+ Driving through the Avenue of Giants (once back in California)

And so. I absolutely adored Oregon. LOVE IT? PIN IT! 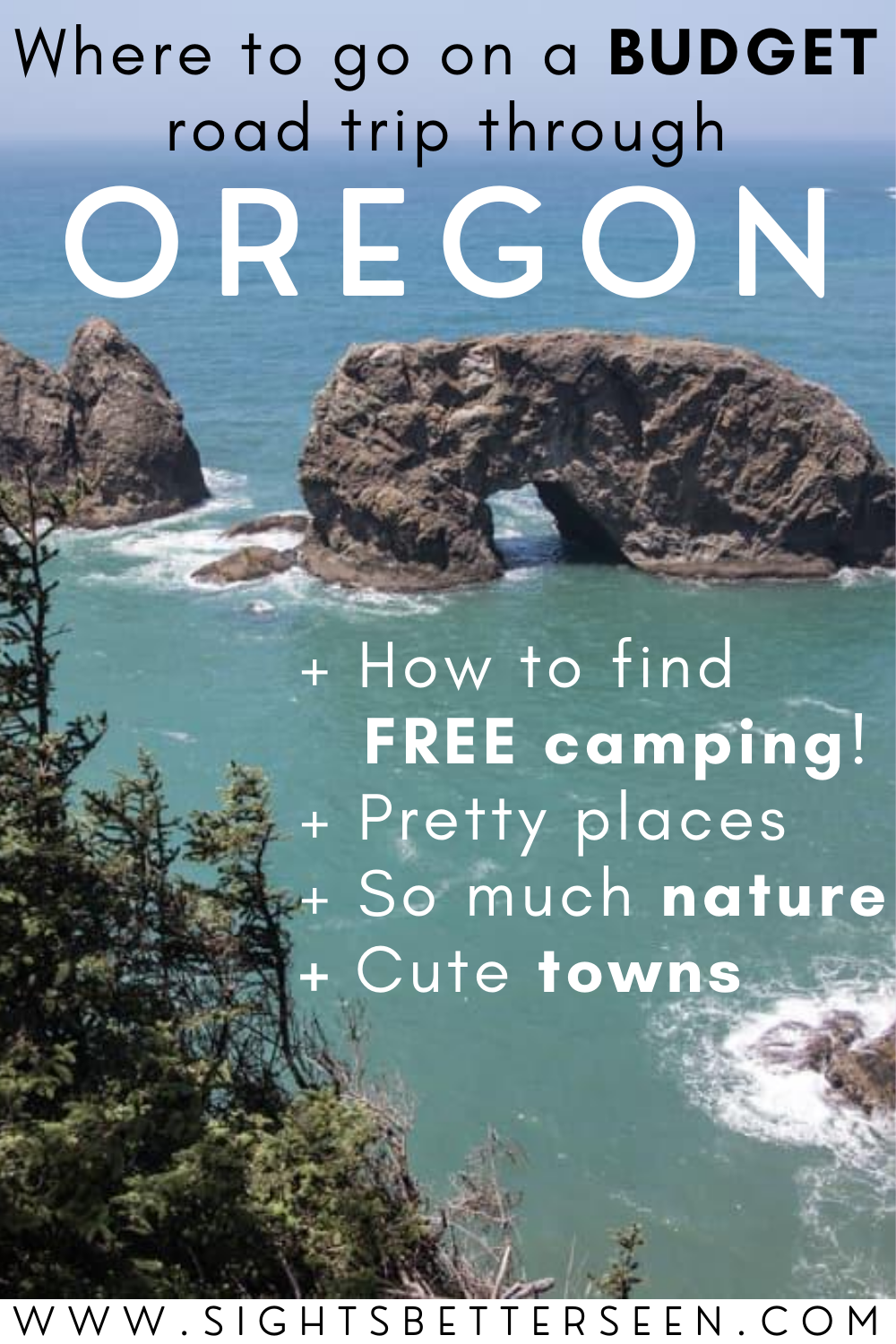