I promise you won’t regret it! But first, a little backstory:

I went with my boyfriend at the time, and we absolutely loved it. We ended up only being in Seattle for like a 2 half days and one full day – we were supposed to be there for 2 full days buuuuut missed our flight early Saturday morning (we arrived at the airport literally right as our flight was leaving, so sad)…

That was a disaster and a half…So note to self: set like 1038448 alarms so you don’t accidentally forget that you haven’t set 4857484 alarms and turn your last one off because you’re an idiot and groggy and basically still asleep…

Luckily, my friend had a voucher we were able to use so that our new flight out didn’t cost an arm and a leg and another arm lol. But then on the way back, our flight was delayed 2 hours…oh the irony.

ANYWAYS. The actual time IN Seattle was lit. So here’s what we did:

HOW WE SPENT NEW YEAR’S EVE IN SEATTLE

So, we stayed at The Mediterranean (which I highly recommend, more on that below), and were supposed to watch fireworks from the roof, but it was too crowded so we just wandered onto the street instead and (IMO) got an even better view!

The Mediterranean is located in the Lower Queen Anne area on the corner of Queen Anne Ave North and West Republican Street. So, anywhere near there should have good views. As long as you can see the Space Needle, you’re golden!

I’d honestly just recommend eating dinner or hanging out near the Space Needle, then just going to the street to watch them. Any of the other popular spots would be too crowded, I think.

The fireworks at the Space Needle were AMAZING. Like super elegant. And classy AF. Not like those tacky ass firework shows you normally see. The colors were so on point and it was just so PRETTY. See a video here.

But other than New Year’s, here’s what else we did while we were there:

THE PINK DOOR IS. SO. GOOD.

We ate at The Pink Door for dinner one night, and let me tell you. The food was literally OUT OF THIS WORLD.

If you’re a vegetarian get the lasagna. SO GOOD. And we had the apple tart thing for dessert and OMG. DO IT. And the restaurant itself has the prettiest decor/ambiance.

On the first morning, we got lucky with beautiful weather and figured we’d do the 30 min walk to Pike Place. We walked down to the waterfront, and lo and behold, Myrtle Edwards Park! The views of the mountains were absolutely amazinggg. We also walked through Olympic Sculpture Park, but I was way more excited about Myrtle Edwards.

We accidentally stumbled upon Pike Street Press on our way to Pike Place! It has all kinds of cool posters, cards, and journals etc. I’m a (super picky) journal addict and found one I was obsessed with.

HIT UP SOME BREWERIES 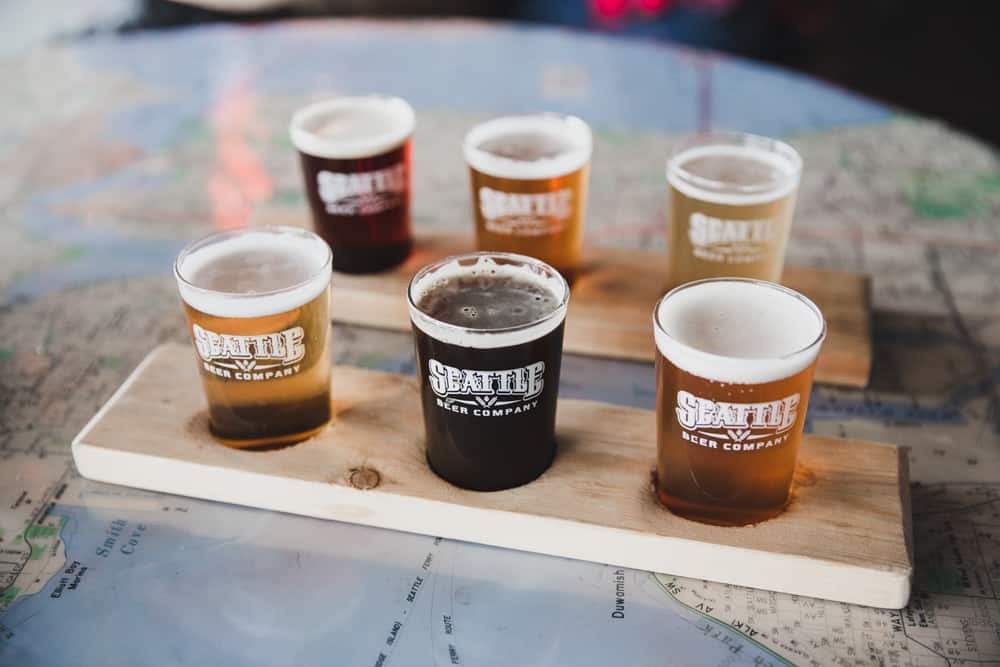 PIKE PLACE MARKET IS A MUST OF COURSE 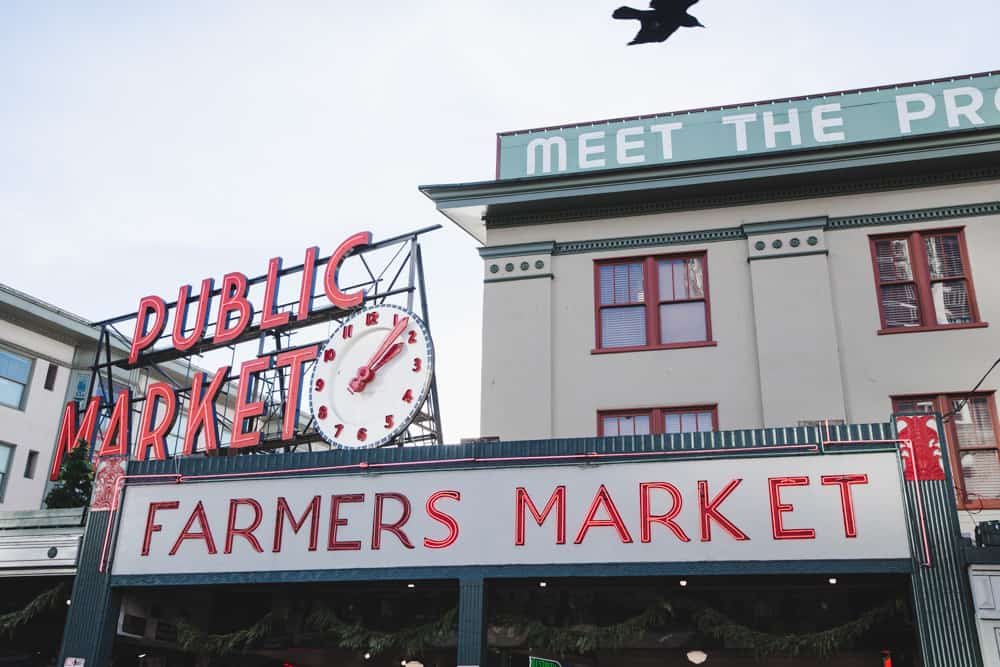 Of course, would it even be Seattle if you didn’t hit up this classic? Apparently, it’s suggested that you go in the afternoon to avoid the morning rush. We arrived around 1 or so, and I didn’t think it was TOO TOO crowded, but it was decently so. Still worth a quick stop regardless, though!

CHECK OUT THE GARDEN AT PIKE PLACE 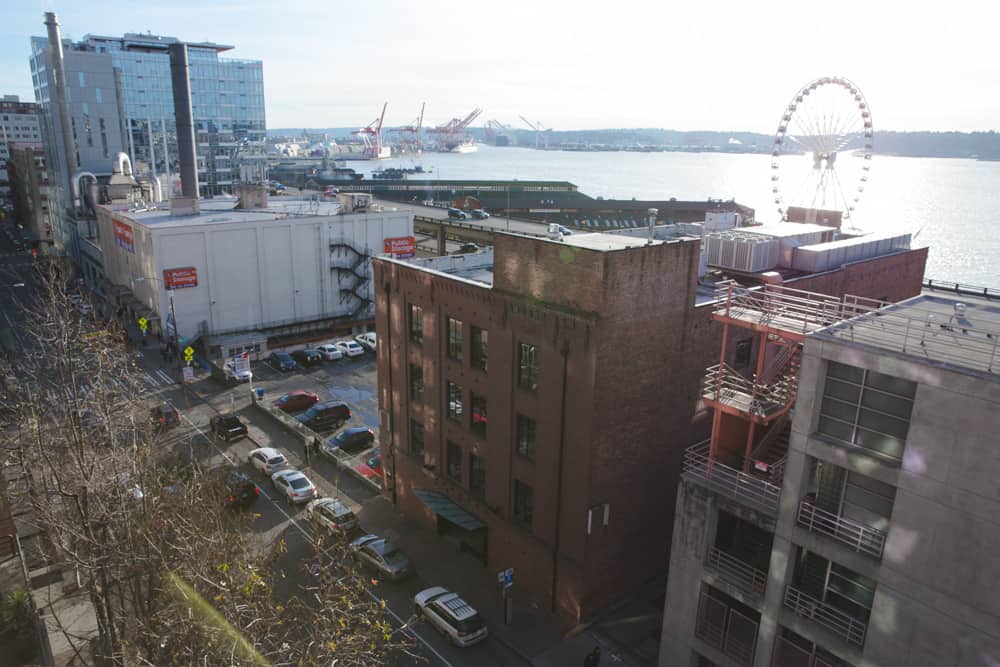 Okay, so I mainly say this because, yes, the garden itself is cute, but THAT VIEW! Might as well just stop by to stare at its prettiness.

THE GUM WALL IS LITERALLY JUST THAT

It’s easy to get to the Gum Wall (just go into Pike Place, and ask around or go downstairs and turn left, it’s a sketchy looking little door) and cool. There are tons of people, though – somehow I managed to get this picture with no tourists.

GAS WORKS PARK IS SO UNIQUE 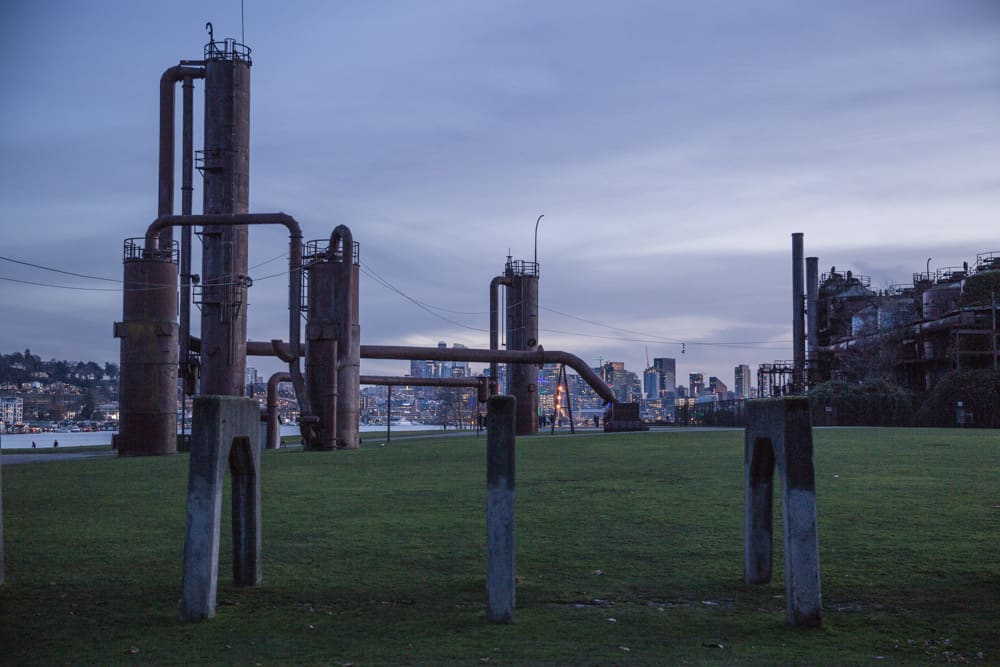 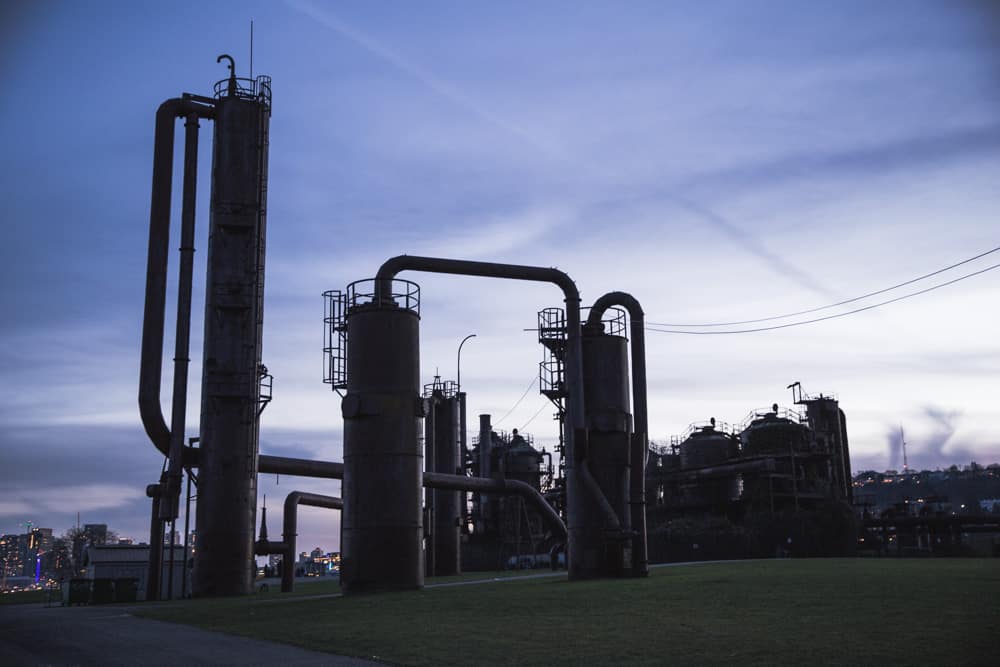 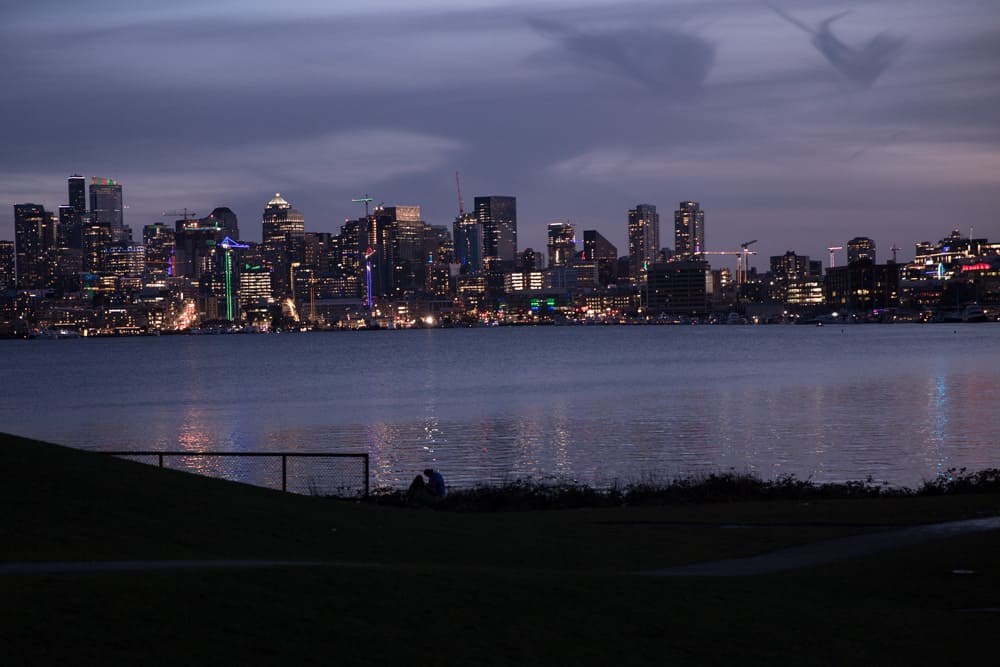 Gas Works Park is so cool! And has the best view over the water. I’d highly recommend it for sunset/after dark wanderings! While you’re there, you should check out The Fremont Troll (although if you’re pressed for time, I’d say skip it), and Pel Meni Dumpling Tzar for some bomb Russian dumplings!

KERRY PARK HAS SOME SOLID VIEWS 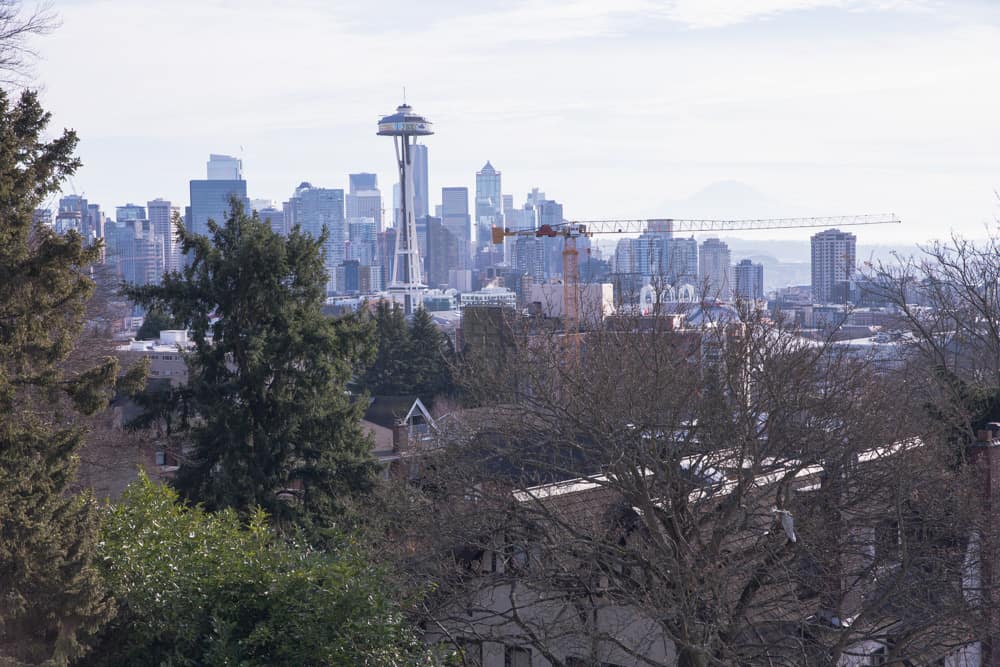 Obsessed with the view at Kerry Park. There were a ton of people taking photos when we arrived; it’s a pretty popular spot.

Lots of people come here to watch the fireworks at the Space Needle, apparently. However, it can get pretty crowded. I honestly really enjoyed just watching the fireworks from the street instead!

DISCOVERY PARK WAS A GREAT DISCOVERY 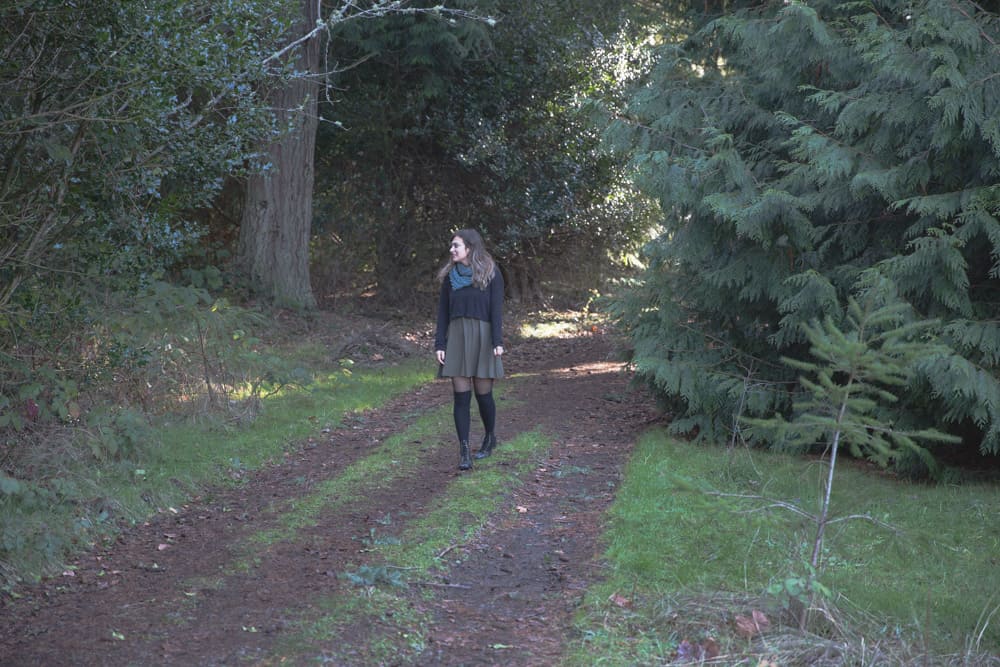 Discovery Park was really pretty, and I wished we’d been able to stay longer.

But we were pressed for time (although if we had KNOWN our flight was going to be delayed for 2 hours, we totally could have! ughhh), and so we didn’t get to walk to the lighthouse viewpoint (which probably would’ve taken about 1.5 hours in total (but let’s be real, I take like 3954873 pictures so it would’ve been more like 3 LOLOL).

BUT we’ve already made plans to come back in the spring/summer because there were so many other cool things we missed!

– Columbia Tower: half the price, and apparently a better view than the Space Needle

– The lighthouse view at Discovery Park

– The roof of The Mediterranean Hotel: Yes, that is the hotel we stayed in. But we were so busy running around that we totally forgot to take advantage of it! We went up briefly on New Years’ Eve to check out the view of the Space Needle before the fireworks, but it was honestly kind of small and crowded so we didn’t stay very long. I’d love to enjoy breakfast up there in the morning, or wind down with a glass (or 5) of wine at the end of the day. And apparently you can go up and check it out even if you’re not staying there…

I was obsessed with Seattle, and had so much fun spending New Year’s Eve in Seattle. It felt like a really clean, less in-your-face-busy San Francisco? And I loved having access to nature so close by.

We got really lucky with the weather (sunny and warm-ish the whole time we were there!), but I feel like I could totally live there. I’m not a huge city person, but I can’t wait to go back!