Tweet
Share
Pin
Share
0 Shares
I fell in love with the Eastern Sierras after I visited last time, so of course I had to go back.

We did ALMOST all of the things we missed last time, save for Inyo Crater – I was tempted, but we left Rainbow Falls & Devil’s Postpile later than expected, so no Inyo Crater for me.

The Eastern Sierras have such vastly different terrain, which is fascinating, too. Both desert scrub and tall pines. I’m partial to the tall pines and lakes, but I like desert scrub, too!

I also love the abundance of BLM land (Bureau of Land Management, aka public lands, aka FREE camping!!) all over the Eastern Sierras. We found really nice, pretty, and secluded sites the two nights we were there.

The first night, we pretty much just looked for random dirt roads leading off of Highway 108, and finally found one in between Pinecrest and Dardanelle.

And in the AM, awoke to the most annoying wasps ever! I’m not sure what kind they were, and I tend to try and love all living creatures, but these 2 guys were swarming the outside of our tent for NO REASON woke me up around 6AM. We had no food or any scented items in the tent with us, so I have no clue. I was not about it though.

Also – if camping, please only camp in designated spots (it’s pretty easy to tell – there’s usually a very obvious cleared dirt area, and sometimes a fire ring, although you’re not usually allowed to have fires). You can look on freecampsites.net to find them! It’s especially important in the desert, as you want to be sure and avoid Cryptobiotic Crusts/Soils!!

Also, Leave No Trace, man!!! I’m sure ya’ll already know this, but try to leave the area as you found out. Pack out your trash, and bury the solid remnants of your bodily functions. I often bring a trowel for this reason 🙂

BODIE STATE HISTORICAL PARK IS THE DEFINITION OF A GHOST TOWN

This place is a very eerie ghost town. The last residents left about 65 years ago – and you can still see inside plenty of the houses, full of abandoned furniture and belongings. It’s quite fascinating to walk around and wonder what life would have been like back then. Since we were up pretty early from the wasp incident, we arrived at Bodie around 9:30 (it opens at 9), which I would HIGHLY recommend because it was starting to get busy by 10. We were happy we’d had a little bit of solitude to ourselves! 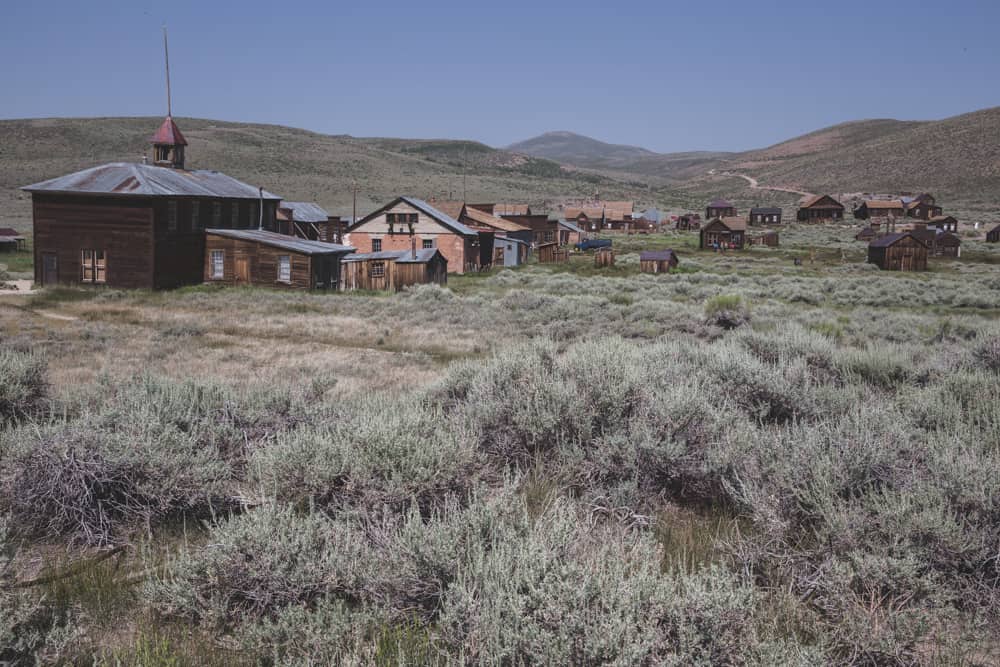 However, it is pretty spread out, so even if you arrived during peak time you could probably walk up into the hills and get away from the bulk of visitors.

Afterwards, we headed to Lake Sabrina, and it was absolutely beautiful, but not without a few (literal) bumps along the road.

So, it was basically a flashback to Oregon, Eastern Sierras style. Google Maps took us on an alternate route as it claimed that the main road was closed (which we later found out wasn’t!!), and of course, the alternate route was along a dirt road in the middle of nowhere. Same as Oregon, the dirt road got worse and worse until it became pretty much undriveable, and then – my car got stuck.

I’d been driving (mistake #1) and tried to go up a hill filled with rocks and grooves. My car got stuck in one of the dips, so I backed up, but panicked and did so in a very crooked fashion – off the road and into a bunch of desert plants.

I forced Sabrina to take the wheel while I tried to breathe, and she confirmed: we were stuck.

My car was leaning way to the left (like halfway to tipping over on its side), the back wheels were stuck in plants, and the front right wheel was digging itself into a deeper and deeper hole.

Two backpackers passed us, saw our predicament, and just said “good luck” before continuing on. Like, they must’ve clearly heard Sabrina say, “we’re stuck” – and didn’t do anything. What would you have done? I think I at least would’ve asked if I could do anything, and then hung out for moral support if needed, even though I suck at driving (clearly, from this incident).

They also had a tiny little car with very low clearance with them, and had gotten almost as far as us before giving up. I have NO IDEA how, we went over some pretty big rocks! I was nervous for my CR-V, and it has pretty high clearance!

Anyways. Luckily we had service, and I was about to call AAA, because my car was digging itself deeper and deeper into a hole. BUT THEN! Sabrina decided to try and back up over the desert scrub (so sorry, plants!!), and she was a G and got my car out!

This whole ordeal lasted about 15-20 minutes. I really wish I’d gotten a video (and Sabrina says she wishes the same, but was too afraid I’d yell at her LOL which I probably would have).

LAKE SABRINA IS PROBABLY A GREENSCREEN

But lemme tell ya, Lake Sabrina was totally worth it! SO pretty, and we decided to kayak – an hour for $15. Pretty damn good deal, if ya ask me! You can also swim in the lake, although we got there around 4 so it was cooling down a little. Most other people were fishing, and renting motorized rowboats – they only have 2 kayaks available for rent, so I imagine fishing is the main draw. Later, we got THE BEST ICE CREAM IN THE WORLD EVER. I swear. I even got the vegan flavors, and you wouldn’t have been able to tell! So, if you’re in Mammoth (or anywhere in the Eastern Sierras honestly), you should 10000000% do this, especially after a day outside. Beware that it is a little pricey, though, but so worth it! And of course, after having ice cream, you wanna go to a HOT SPRING. Oh yes, and Mammoth is full of them. Although, I maybe wouldn’t recommend trying to find one on a Saturday night in the summer at 7PM, because they were ALL FULL. We tried 3 different ones, and contemplated going to Wild Willy’s, but decided we didn’t really feel like that sort of atmosphere (it’s known as a party -sometimes naked – spot).

So we settled on a BLM site near the hot springs – there are a TON of sites in that area. Had a couple Coronas and passed out pretty early.

Our last day we hit Rainbow Falls and Devils Postpile. In the summer months, you have to park at the Mammoth Adventure Center and take a shuttle, which is actually kind of nice, although it does cost money.

I’d also recommend going early, as we were there at 10, and hordes of tourists began descending around 10:30. So get your ass up early, and GO.

The hike isn’t bad at all, either – about 5 miles round trip (2.5 each way), although we took a short cut and probably cut a mile out.

We wanted to hiked down to the bottom, but the stairs are CLOSED FOR RENOVATION. NOOOO WHYYYYYYYY. It’s been closed since August 2016, and the website doesn’t say when it will reopen.

DEVILS POSTPILE IS ACTUALLY A WORK OF GOD

I’d def recommend both Rainbow Falls and Devil’s Post, and the trail is really pretty, too. Keep in mind that it is a popular spot, so if you’re visiting on a weekend in the summer GET THERE EARLY.

However, the Eastern Sierras are still nowhere near as crowded as Yosemite or Tahoe. So, I’d highly recommend them for this reason. And you get both desert scrub and tall trees, which is kind of fun.

I wish we had hiked to the top of the Postpile (a super short hike) because the tops of the columns look like really cool honeycomb-shaped tiles!

I can’t find why in the world it’s called Devils Postpile, and don’t 100% understand how it became what it is today. But basically, some crazy earth shit went down and this was the result. Geology nerds, feel free to explain away in the comments!

I’ve heard that it’s awesome to stop and eat at the Mulehouse Cafe in Reds Meadow (a popular spot for PCT hikers in the Eastern Sierras), but didn’t get to try it this time.

This was such a quick trip, too – like I left on Friday around 2PM, it was about a 5ish hour drive each way, and we came back on Sunday evening. Will you drive hella far to get to a cool spot just for a few days? Or would you rather explore things close by, even if you’ve been a million times?

It’s worth the quick trip to see a beautiful place like the Eastern Sierras! I hope you get out there, but don’t be dumb like me and get your car stuck. Happy Sierra-ing!!