Tweet
Share
Pin
Share
0 Shares
I thought it would be super fun to pick some pretty/epic looking (or just lame but maybe I have good stories ok??) travel photos and tell you the honest truth behind what was actually happening behind the scenes.

Because we all know that with Instagram and all those other social media platforms that are full of lies, it can be kinda disheartening sometimes.

OUR CAMPING FAIL IN POINT REYES

So! My boyfriend at the time and I decided to go camping. I was super excited, because I was usually the planner, and he offered to plan this trip. And because we didn’t often have time to take vacays just the two of us, this was a treat.

Anyways! So, after a 2 hour drive, we get to the park office, ready with all of our stuff. And we had A LOT of stuff. Like, giant 4-person tent, huge sleeping bags, wine, cans of food, etc.

It turned out our campsite was actually 4.5 MILES from our car. My bf hadn’t realized that it wasn’t one you could drive up to – he’d just made the reservations and been done with it.

SO, we ended up taking apart our bags, deciding what would fit, but still had to carry our giant tent and huge sleeping bags and the rest of our extra-ass shit.

It was a LONG 4.5 miles, to say the least. We had two small daypacks, my bf was carrying the tent, I was carrying an extra bag – it was quite a struggle.

The whole point of coming here was to hike to the falls, so after we’d finally made it to our campsite and unpacked, we still had to hoof it 2.5 miles to the beach (without all of our stuff this time!), and then back to our campsite. And I think we left the car around 1PM, and left our campsite around 5:30PM (it got dark around 8/9). I was stressin’ since we had to factor in the tide along the beach – you had to walk along the beach to get to the falls from our site, and when the tide was in, the entire beach was covered. I knew the tide was coming in when we began our hike, but had no idea when it would actually cover the beach. Luckily, all was good, and we made it to the waterfall and stayed for about 30 min, because we still had to hike back and it was getting dark. We forgot the can opener and had to open our cans of food with knives LOL. We also failed to bring our wine opener, so, same thing!

Next morning, we hiked back out with all of our stuff. It was a fun, but intense trip, and I doubt he’ll ever forget to look up the distance to a campsite again LOL. It was still a pretty fun trip regardless, and now makes a great story, so there’s the silver lining.

THE NORTHERN LIGHTS WERE A LIE

So you may already be familiar with the northern lights – heard of them? Maybe?

Seeing the northern lights was my main goal when I decided to go to Abisko, Sweden. Abisko was absolutely beautiful, but I’d been dying to see the lights since I saw Balto as a kid (anyone??).

My friend and I signed up to go on a tour (you definitely did not need to do this, but we had a couple of friends also going on the tour) to see them. We knew it wasn’t guaranteed, but had our hopes up anyway.

We were shaking with anticipation, and staring intensely at the sky. Our guide suddenly got excited and pointed in the distance.

I whipped my head around in the direction our guide was pointing, and…Nothing. If I squinted, I saw a tiny hint of green. But maybe that was just the color of the sky?

I got my camera ready, since he’d said the lights often show up much better on screen.

Clicked the shutter, and boom! There were the lights. I looked back up at the sky. Nothing. Back at my screen. Absolute beauty. Looked at the sky. A slight flicker of green if I closed my eyes and then opened them quickly.

These obviously were not the lights I’d been hoping for, but I still have hope. Apparently, they really do dance and it’s not all a complete and utter lie fed to impressionable children via a movie.

But I won’t believe it till I see it.

Last summer, I went on a 2.5 week road trip to Oregon and it wasn’t without a few mishaps. Our biggest fuck up happened when we went to Skylight Cave and decided not to go back the way we came, since it was much shorter to go directly to Sahalie/Koosah Falls.

For the first 45 minutes, everything was fine. We were eating our weight in dried pea snacks. I’d found a shit ton of lupine to frolic through. Life was good.

BUT THEN! The road started to get sketchy. It had always been a dirt road, but suddenly we were going over some hills and had to move a few fallen tree limbs out of the way.

We weren’t out of the woods just yet (literally and figuratively) as it got even sketchier. There were rocks and giant hills and more fallen tree limbs, but much bigger than at first. My car started to struggle getting up a couple of the hills. And although I have high clearance with my car, it is by no means a 4-wheel drive.

Did I also mention that we had no reception? For like miles and miles? So if we got stuck we were SCREWED. I was mentally calculating how much food and water we had with us to determine the length of time we could survive without help LOL.

At this point, we considered turning back, but we’d gone down quite a few big drops and were afraid my car wouldn’t make it back up. Plus it wasn’t THAT far to the falls area, and we’d already gone about an hour.

My friend had been off-roading before, so I made her drive and closed my eyes as we went up and over more bumpy terrain.

After 30 more minutes of sheer panic (on my end, at least) we finally made it out and onto paved road. I breathed the loudest sigh of relief heard around the world and we soldiered on to the falls.

Anyways, the title photo is from that road. And also where we stopped so I could pee on the side. #peeswithviews

I hope you enjoyed reading the truth behind these photos! Truth is, travel isn’t always rainbows and butterflies (shoutout to Maroon 5), but you’ll get great stories out of it that you can tell later! So at least there’s that.

Tweet
Share
Pin
Share
0 Shares
Sights Better Seen contains some affiliate links, and if you click one I may receive some commission (at no extra cost to you). But don't worry, I only recommend products/things I actually like and use. :)
The Time I Met Two Strangers & We Went Hitchhiking
The BEST Eastern Sierras Road Trip Itinerary 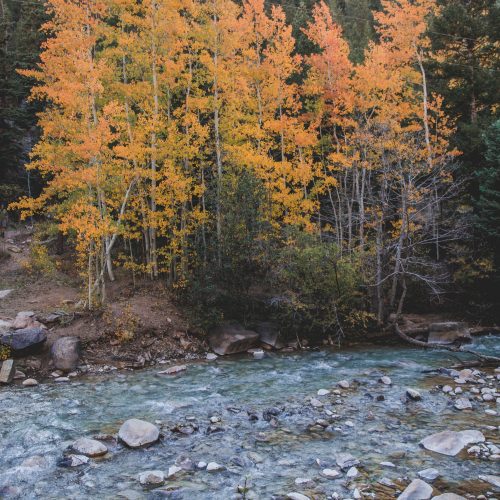 Hi, my name is Kelsey and I will lay on the ground