Tweet
Share
Pin4
Share
4 Shares
Over the course of our 3 months in Europe, my friend Stephanie and I ended up spending the bulk of our time in Hamburg. This was a total accident! But a very happy one.

I honestly wasn’t even really that excited to go to Hamburg in the first place – I really only went because we found a house sit there and it was for 2.5 weeks which I was stoked about (since we’d been traveling everywhere for about 1 week and I was ready to camp out in one spot for a hot minute), and because my friend really realllllly (like reallllly) wanted to go to Germany.

I was more like NORWAY! SWITZERLAND! AMSTERDAM! And I guess Hamburg? Since it exists?

But now I just feel like Hamburg is super underrated (And I honestly prefer it to Berlin, too, for similar reasons that I preferred Lyon to Paris. But shhhh I didn’t say that…), and it actually ended up coming on top as one of my favorite places! Here’s why:

THEIR BIKE RENTAL SYSTEM IS SO GOOD

I loved riding bikes here. So many people bike so the city definitely feels like it was built for it, and the motorists are used to cyclists (unlike in the Bay Area where I’m from).

And their bike rental system (called StadtRAD) is so awesome! You do have to download an app in order to rent them, and have to put €5 on it to start out, BUT it’s very worth it if you end up using the bikes often each day (all day rental bikes cost upwards of €12 usually.)

There are rental stations all over the city, and the first 30 minutes of each ride are free, baby! And after that, it’s only 10 cents/minute. Plus, Hamburg isn’t HUGE but it’s not small either, so biking is perfect. And, unless you go to Blankenese or down to the dock area it’s relatively flat which makes biking a real breeze! Learn more here.

I also loved biking since there’s so much traffic within the city itself (I will forever refuse to drive in those often crowded and very narrow streets) and the buses aren’t always SUPER reliable (no joke, we once had a bus refuse to pass a car that was parked on the street when it totally could have driven around it! And sometimes the buses just randomly terminate their routes early on certain days – idk why).

So, biking often felt like the path of least resistance haha.

There are SO MANY PARKS! They even have a huge cemetery, which sounds creepy (but tbh I like cemeteries? Something about the gravestones and reminder about mortality?), but is actually really really cool. It’s the 4th largest cemetery in the world, and the largest rural cemetery! And no, this does not mean the cemetery is out in the boonies (although if you live in central Hamburg you might think it is), but rather that it’s landscaped like a park. But if cemeteries aren’t your thing, fear not – there are OVER 1460 other non-dead people parks to choose from!!!

Needless to say, we had a LOT of picnics while I was there. You can rate a park on its picnic-ability by the presence and type of grass, scenery around it, how far you have to walk from the train station, absence of wind, etc. And many parks in Hamburg rate really well based on that scale!

Plus Hamburg in the spring??? I am obsessed!!!

My favorite parks: Ohlsdorf Cemetery, Stadtpark, Planten un Bloomen, and Hammer Park. And all the random green spaces in the Othmarschen/Blankanese areas. Clearly I almost visited all 1460!!!!

When I go back, I want to check out Dahliengarten – basically a park full of Dahlias! Be sure to go when they’re in season, though – unless you’re really into Dahlia stems and leaves, in which case, be my guest. It looks like the peak is in September, but you can still see them in August and October.

There’s no shortage of good views in Hamburg! And they’re pretty easy to find – my favorites were Stintfang, anywhere in Blankenese, the Elbphilharmonie (free but you still have to get a ticket at the entrance booth for some reason), the ferris wheel at the DOM (€5, scroll down for a photo), St. Michael’s (costs €5), and the Dockland Office Building.

I LOVE brick. And there are TONS of brick buildings in Hamburg! And the architecture in general makes me happy.

SO MANY FUN NEIGHBORHOODS TO EXPLORE

I love that each neighborhood in Hamburg has such a distinct vibe! And they’re all pretty nice – like there aren’t really any ‘bad’ ones, so to speak. But they’re all quite different and fun to see how the vibe and building style changes as you meander from place to place.

Like most big cities, Hamburg has a lot going on! And there are all kinds of different fun events going on pretty much all the time. It’s also a huge expat city and has a large student population, so that gives it a fun/interesting vibe as well.

Like, SUPER safe. Like you can ride the train back in the middle of the night by yourself and feel totally fine.

THE NIGHTLIFE IS SOME OF THE BEST IN EUROPE

Hamburg is one of THE best places to go out! And there are all kinds of different vibes – from the fun but also kinda trashy Reeperbahn (which is basically the Vegas of Europe in my opinion, and home to their red light district) to the more classy Sternschanze.

And the drinks are CHEAP (we’re talking €3 shots and even cheaper beers) which just adds fuel to the fire. The trains also run really late, and on weekends pretty much all night, so it’s super easy to get around, too! Most places don’t charge an entrance fee, either.

Places are also open LATE. Like it’s super easy to party until 5AM if you’re really in that sort of mood!

But yeah, any vibe you want you can find! You can go dancing, you can have a chill night in, you can go to a strip club…And there are a ton of unique sex shops you can visit! The largest one, Boutique Bizarre in Reeperbahn, is really worth checking out.

And drinking in public is LEGAL (like many other places in Europe). In the US, you CANNOT legally have a beer/wine in public outside of an establishment like a restaurant or bar. In Europe, you can walk the streets freely with open beer or alcohol bottles! Just make sure you don’t have glass bottles in Reeperbahn, as that’s illegal (plastic is fine though!), but everywhere else glass is fine!

Like many cities in Europe, Hamburg has a ton of waterways. Hamburg’s got a huge river, the Elbe (and apparently you can go swimming there in summer!), and two lakes – the large Außenalster and smaller Binnenalster!

You can rent boats and paddle your heart out on the Außenalster – I actually went sailing last time! Which sounds like it would cost a lot, but was actually pretty cheap to do (although you do have to know someone who has a license).

We also went canoeing in the Alster River when I was there which was really really fun. There was even a “drive through” ice cream stand that you could paddle right up to on the water!

The public transportation (save for the occasional bus issue as mentioned above!) is incredibly easy to navigate. Yes, many European cities also have this, but I am still in awe coming from the US.

I love that Hamburg has so many beaches along the Elbe! Blankenese beaches are absolutely gorgeous, and so is that whole area.

FISH MARKET IS A MUST DO

This is a super cool and unique experience! Basically, it’s just lots of people shouting and trying to sell market foods/products and it’s all really exciting.

I was there for the last parts of the shouting, but I’d love to get there at the beginning although that’s at like 5AM which is waaaaay before I’d ever choose to wake up. So, another option is not going to bed and heading there after a night out 😉

And if you eat fish, a Fischbrötchen (basically a fish roll sandwich thing) is apparently a must have.

ITS PROXIMITY TO OTHER LOCATIONS

Hamburg is so close to northern German beaches (which I have yet to visit but have heard lots of good things about!). And also Denmark – YES Denmark! I felt like such a geography fool but I really didn’t realize how close Hamburg was to Denmark. But it’s literally right above Germany. Oops. But yeah, since Hamburg is so far north, it’s literally closer to Denmark than it is to other southern German cities like Munich! Pretty crazy.

And as a lover of Copenhagen (I’d seriously consider moving there if it wasn’t so expensive) I love that it’s so close for an easy city getaway.

So, in summary, I was so surprised at what a beautiful, green city Hamburg is! There were many other things that surprised me about Germany, but my love affair with Hamburg was one that surprised me the most. It feels like a nice (and not overwhelming) little city bubble, and I like that. I can’t wait to go back, and am already planning my return! 😉 LOVE IT? PIN IT! 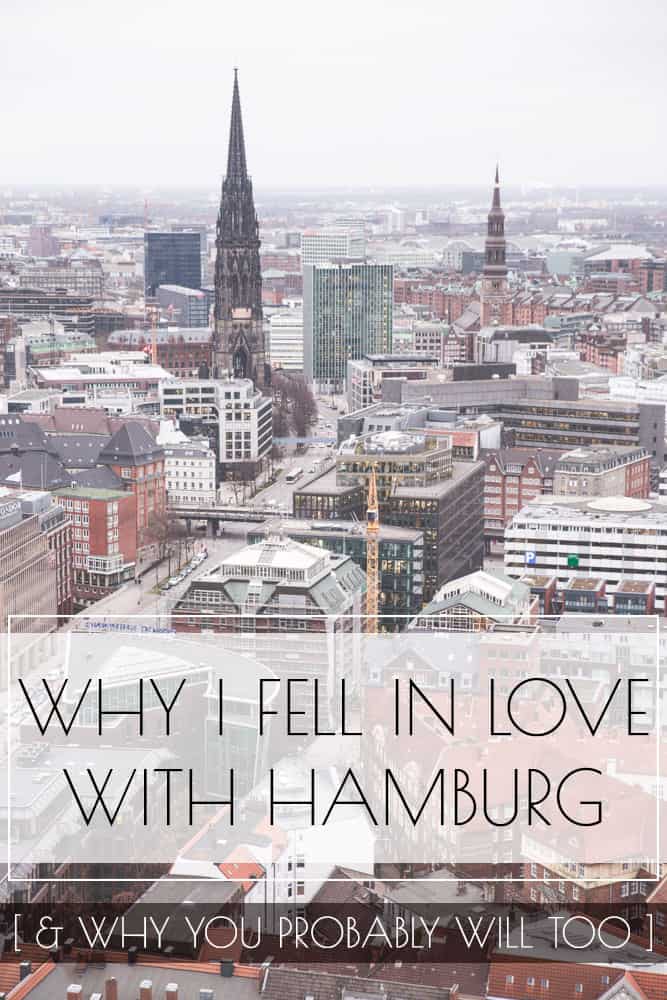 How to Explore the Algarve by Campervan