Full disclaimer: I don’t know if this will ALWAYS be a cheaper option, but for us it was! Plus, ima be honest, I really just wanted to stay OUT OF THE CITY since we had just come from a couple days in Paris and a few in Lyon.

But I digress – for us, it was the cheaper (and prettier, in my opinon) option! 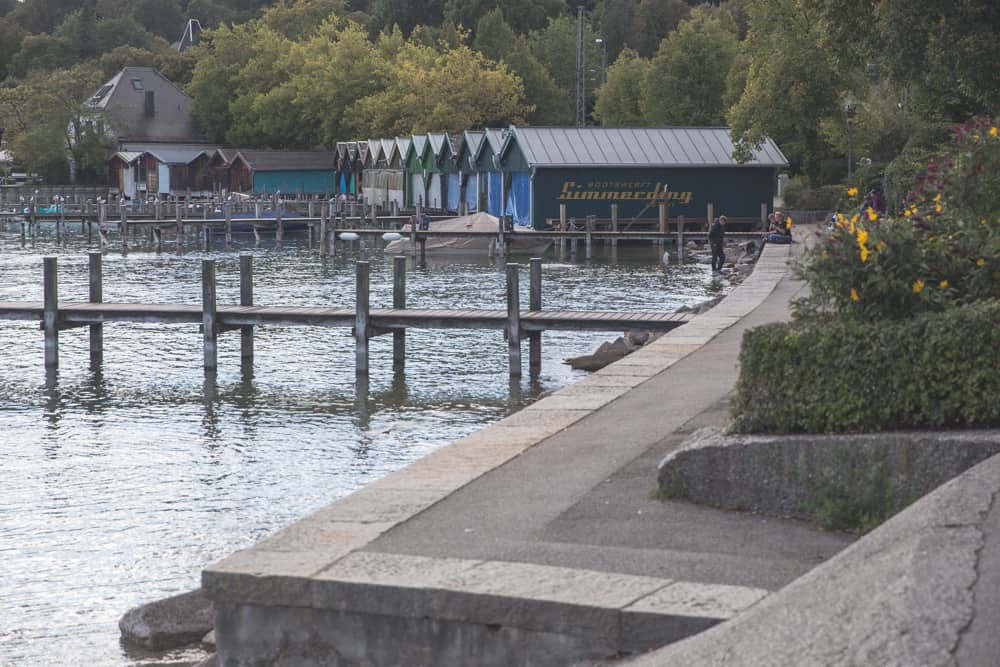 It’s a pretty little town with and here’s why I loved it so: 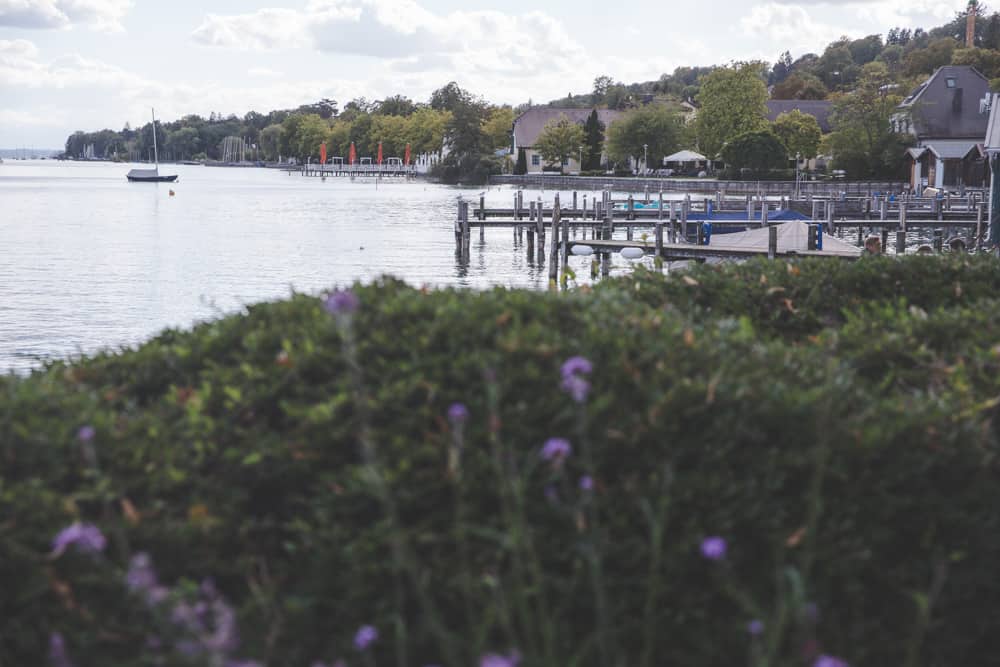 The lake is called “Starnberger See” (“see” means “lake” in German) and is so so pretty! If you have enough time (I really wish we did) you can hop on a ferry or rent a boat and check out the different towns around the lake.

As previously mentioned, there’s a lake and lots of pretty natures. You can go into the countryside around the lake, but that may be difficult to do without a car. However, the town and lake are so pretty that I’d just suggest walking or biking around the lake (you can easily rent one if you don’t have one with you). Or you can find random paths near the center that take you into a wonderland like the pictures above.

YES, YOU CAN BUY YOUR OKTOBERFEST OUTFITS THERE

We didn’t buy our Oktoberfest outfits beforehand since we didn’t want to carry them around during our trip – 2 days in Paris, 3 in Lyon, and 3 in Starnberg/Munich (and because we were flying cheap airlines that were carry on only – you’d be surprised how much space those outfits take up! Although we were able to cram them into our suitcases on our way back).

So, we had to buy them there! Apparently all shops close on Sunday, BUT there was one by the train station that was open (I’m assuming since they KNOW people will be buying things for Oktoberfest). We were able to get ours for a pretty good rate (my BF paid 50€ for his lederhosen, and I paid 60€ for my dirndl).

However, if you don’t get a chance to grab one in Starnberg, you can do so at one of the many shops open before you enter the festival. We walked by at least 10 on our way from the train station to Oktoberfest. Also, a little note about Oktoberfest: I LOVED it. I don’t usually love super crowded places and large festivals, but I think the fact that you had to sit down (if you wanted any beer, which of course we did) helped me feel less overwhelmed.

Plus everyone is just so friendly and wants to have a good time. Everyone I chatted with was wonderful and you meet people from all over the world! Over the course of the 8ish hours we were there, we met people from the states, Argentina, Slovakia, UK, Germany that all sat at our table!

So if you get a chance to go do it!!! Plus the festival itself is free – soooo if you hate it you can leave, without having wasted any money! Oh and also the food. Promise me you at least try some food. I’m a vegetarian and saw lots of vegan options, too! I had the mac and cheese and cheesy potatoes (I tried to learn what it was called in German, but the name was soooo long) and they were DELICIOUS.

IT’S ONLY A 30 MIN TRAIN RIDE FROM MUNICH

So, it was really easy to get there and back – you either take the S6 or RB train if you don’t want to transfer. Trains run decently often – like every 15-20 mins if you want the direct route – although they run less often as it gets later, so keep that in mind. It’s not THAT cheap – it’s 8.90€ each way for a single ticket, or €16.10 for a group (up to 5 people). So, it’s WAY more cost efficient if you’re in a larger group! My bf and I just got the group ticket because it’s even a little more cost efficient for 2 people. Each ticket is then valid until 6AM the next day, so that’s pretty awesome! So, you can buy a ticket at 3PM to get to Oktoberfest and not need to buy one for the train back (as long as you keep the old one).

It’s open late (even on a Sunday) – we got to the train station about 10PM (and accidentally rode it the wrong way for a hot sec, oops – gonna blame it on the beer lol). It looks like trains run until almost 1AM (even on Sunday night) but you may want to look it up on Google Maps or Deutsche-Bahn (the German train site) to be sure.

München-Hbf is the main station in Munich, and it’s about a 15 min walk to Oktoberfest from there. If it’s your last day before departure or you wanna get the party started before checking into your accommodation, they have lockers where you can store your luggage!

The train station was only a 15 min walk from our AirBnb in Starnberg, but it ended up pouring rain as we were walking back. We ended up running and went the wrong way by accident until finally making it back to our room, soaking wet. I have no idea why we were stubborn and refused to just get a cab or Uber. But now it’s probs one of my favorite memories soooo 🙂 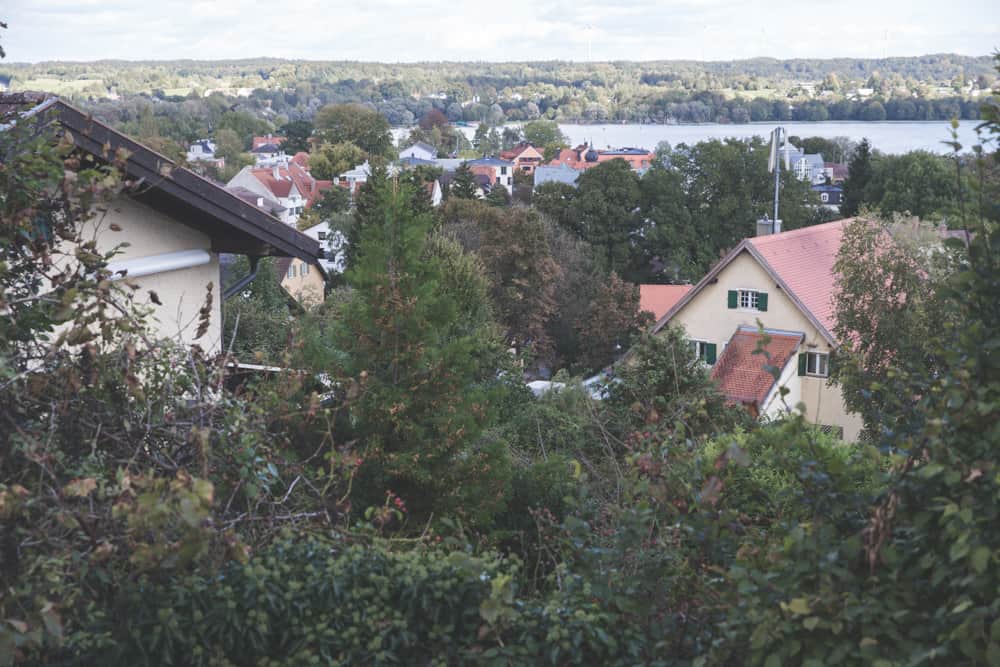 If you want some pretty views, go to St. Joseph’s Church! I couldn’t find much info on it (it’s not even on Google Maps!) but you can just follow the spire (visible from most places in the town center) and find it. From there, you can look for a walled garden to find some nice views! We didn’t have a ton of time so I didn’t get to stay as long as I would’ve wanted (what a lovely place to read a book and relax!).

WALK THROUGH THE TOWN CENTER

Which you’ll end up doing if you have to walk to/from the train station, anyway. But omg. The architecture is SO FREAKING PRETTY.

We only had one meal out here (thanks to our AirBnb host providing free toast for breakfast #ballinonabudget and us wanting to experience the Oktoberfest food to the fullest!!) at Boston Café and Cocktail Bar but it was SO GOOD. My BF even said it was the best meal he’d had our entire trip!

So, promise me you’ll at least CONSIDER Starnberg. Especially since some people we met were camping and paying the same amount that we were to stay in a house. Oktoberfest prices be cray, people!!

I’ve also read that Augsburg is a nice place to stay if you can’t find a place in Munich. It seems to be about the same distance as Starnberg, but from the northwest instead of the southwest. It’s also more of a city than Starnberg, so if you’re more into that go there!

WHY YOU MAY WANT TO STAY IN MUNICH ANYWAY

However, if you want to continue the party late into the night, it may just be easier to stay in Munich. We were pretty tired by the end of Oktoberfest (if I day drink, it’s almost a guarantee I won’t be going out that night haha) so I was happy that we were able to take the easy train ride back to quiet Starnberg instead of staying in busy Munich. But, just my opinion! I’m an introvert and not as much of a city rat so I was grateful to go back to peace and quiet. But like I said, it’s pretty easy – we just plugged in public transport from the airport to Starnberg in our phone’s GPS before we lost wifi (we were cheap and trying not to use my BF’s phone plan, which charged us by the number of days we used it).

I also want to note that the train ride from Starnberg to the Munich airport is kind of a trek. Like, it’s easy to do, but definitely a pretty looooong train ride. Like 1-1.5 hours long. Whereas to Munich, it’s about half that. You have to change trains once in Munich, too. Plus, it’s kindaaa pricey (although it’s the same price to go to Munich), about 13€ for a single or 24.30€ for a group.

A lot of wealthy people end up living and retiring in Starnberg. It’s also a very popular place in the summer as a day trip from Munich (so you may want to avoid it if you hate crowds in summer – however, at the end of Sept, it was perfect and not crowded at all!).

So go, and promise me you’ll make time to explore the other towns on the lake. I’ll be living vicariously through you because I really wish we’d had time to do that!