And I kind of only went because we found cheap tickets (you can find the cheapest flights on Skyscanner! You can often find prices as low as $300 round trip from many major US airports in winter – ours were about $440 but we paid extra to choose our seats and bought flights only about a month in advance).

But I came away loving Stockholm! And there are still a lot of things to do in Stockholm in winter, surprisingly. I’ll be honest, I liked Copenhagen a bit better, but I also feel like we didn’t get to see as much of Stockholm as we did Copenhagen.

Stockholm was at the beginning and end of our trip, so at first we were too jetlagged to do much (we were there for a day and a half before heading to Abisko), and then at the end we were pretty tired from a week and a half of non-stop (cold) travel. But, I did enjoy it, and would love to see it in the summer (especially to explore the Archipelago!!!).

All of that said – we had a pretty great time in Stockholm! Like Copenhagen, there were a ton of veggie/vegan restaurants (I’m vegetarian, and my friend is vegan), everyone was really nice and cool and stylish, we didn’t even need to take out cash because they took card everywhere, the metro was super easy to use, it really wasn’t THAT cold (and was honestly kind of exciting for this Californian to see what real winter is actually like LOL), and it was so pretty. Only downside: the expensiveness. Although I do think we got better deals on AirBnbs and hostels since we were traveling during the low season! But the restaurants and money spent going out – that sure put a dent in my wallet.

Admittedly, we could’ve saved more if we’d done a bit more cooking (we were much better about that during the first half of our trip!) – we got pretty lazy towards the end and ate out A LOT. But, a lot of the activities we did were free – so I guess we saved in that sense?

Not sure what to pack? Check out my Europe winter packing list (carry on only)!

Without further ado, here’s a great itinerary for Stockholm in winter:

STOCKHOLM METRO STATIONS ARE MY INSPIRATION FOR LIFE

Checking out the different Stockholm Metro Stations was one of my favorite things that we did during our whole trip! The stations were sooooo cool. My favorites were:

Other stations we didn’t get to see that look totally rad:

I’d advise you to go during non-peak hours – so, not in the early morning or at rush hour in the afternoon. We went around 11:00AM and it was perfect. You may even see groups of school children in giant puffy snow gear like we did – probably the cutest thing I’ve ever seen in my entire life.

A single use ticket will work for 75 minutes, and costs 45 SEK ($4.78USD). We didn’t want to purchase a 24 hour ticket as it was a bit pricier, so we just prioritized the stations we wanted to see. There are many several different ticket options, so just choose whatever is best for you!

VASA MUSEUM IS THE COOLEST EVER

Where else can you go and see a real life Viking ship? Nowhere. Except the Vasa Museum. And maybe if you went back in time.

But for now, just go to the Vasa because I think that’s much easier than time travel (and probably a lot less terrifying – although I feel like Viking men were pretty hot, so I don’t know, might be worth the risk?).

There are also a bajillion other museums in Stockholm if Vasa isn’t your vibe.

The ABBA Museum for, duh, EVERYTHING ABBA

FIKA & HYGGE ARE EVERYTHING

Fika and hygge are the best vibes ever invented. I love being cozy, I love dim lights, I love candles, I love sweets, I love stuffing my face with said sweets, I LOVE IT ALL. I LOVE HYGGE AND I LOVE FIKA.

You get a cute little Swedish (or Danish) cafe where you can feel happy and warm while it’s lightly snowing outside. And that is real life, people. So, find a cute cafe to hang out in for a bit and get cozy. Just avoid the ones in Gamla Stan (the old town) which tend to be touristy and overpriced. Check out one of these tried and true places:

GAMLA STAN IS PRETTY AND PERFECT

Gamla Stan is Stockholm’s Old Town. There are lots of fun touristy shops and cute cafes and things. But again, know that they will all probably be overpriced and don’t make the same mistake we did and let our phones die (did you know electronics die sooo much faster in the cold?) and have to stumble into the first place we found because we were about to die of starvation.

It is here that I learned I really like Chokladbollars (basically, balls of chocolate and oatmeal, usually rolled in coconut flakes or sprinkles or something) and wish I’d learned that fact earlier. And at a cheaper cafe, lol.

THE ICEBAR IS CHILL (LOL GET IT)

Yes, the Icebar is the definition of touristy, but it was still so cool!!! You pay about $20 USD (which isn’t terrible) and this gets you in the bar for about an hour, plus a ‘free’ drink and extra coat they let you borrow for warmth. And trust me, you will need it! We went on a Tuesday night so it was empty, and we got to chatting with the bartender who said he’d let us stay as long as we wanted since it wasn’t crowded. We left after an hour anyway because we were getting a little cold, so you really don’t need much more than that!

FOODS & NIGHTLIFE ARE FUN AND GREAT

Femtopia was so cool! There’s a little thrift shop in the back, and it’s marketed as an LGBTQIA+ friendly space. There were people there studying together, which added to the home-y feel, and the sandwiches were bomb!

We also ate a lot at our hostel (I think once for dinner and twice for breakfast), The Generator, and it had some pretty good meals, too. We went out to Soap Bar one night, which was pretty busy even on a Tuesday, and then ate there the next day! It was also pretty delicious.

And the 7-11’s were really something! Nothing like the shitty ones we have here – the food there was gooooood. None of the other places we ate really stuck out in my mind – sometimes we were trapped in a place with no wifi (neither of us got a phone plan) and so we would just pop in somewhere close by.

We also went to Cafe Gramunken in Gamla Stan (we were trying to find the vegan place Hermitage, but for some reason my phone quit out of the map I had saved offline and we couldn’t find a place with wifi) which was ok, but definitely overpriced and a tourist trap (to be expected in Gamla Stan – it’s quite touristy!). I’m not linking that place because I wouldn’t recommend it lol.

I REALLY wanted to eat at Meatballs for the People (their veggie ones are supposed to be lit). We didn’t end up having the chance to try it. Ah well, next time!

WHAT WE MISSED (I’LL BE BACKKKK)

We’d thought about taking a boat ride around the harbor, but that didn’t happen.

Also – The Archipelago! They’re a huge cluster of islands that are supposedly soooo beautiful, and you can take boat tours to them (although I think that’s more of a summer activity).

We didn’t get a chance to try allll the yummy vegan places we’d read about, so that was kind of a bummer. But ah well. I’ll be back!

We got a private room at the hostel The Generator and really enjoyed it. I was surprised that it’s a hostel – it felt incredibly fancy and cool. The food they served was DELICIOUS and we definitely ate there a little too much haha. They also have lots of fun events going on, so it’s a great place to stay if you’re a solo traveler or just want to meet people!

And prices in winter are CERTAINLY cheaper than those in the summer, so take advantage of them if you’re usually a super budget traveler like me haha. Normally, I probably wouldn’t have stayed in a nice place like The Generator (it was really nice – it felt more like a cool hotel than a hostel!) but thanks to the off season, it was pretty affordable.

I hope I’ve convinced you to at least consider visiting Stockholm in January! It was a really cool and unique trip, and summer is cool but winter is cooler (haha get it?). Just be sure to pack some warm clothes, and you’ll be set!

WANT TO SAVE IT FOR LATER? PIN IT! 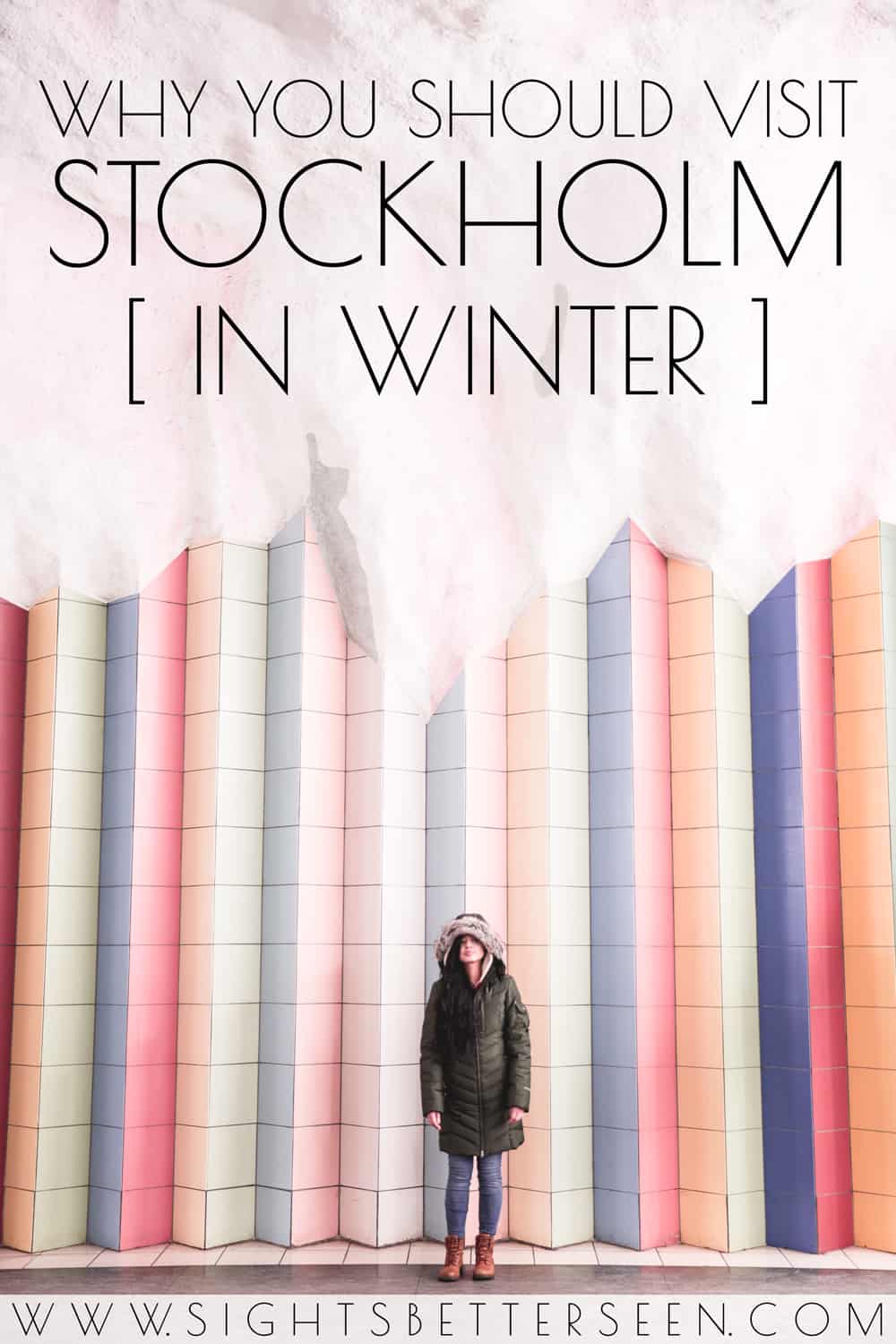 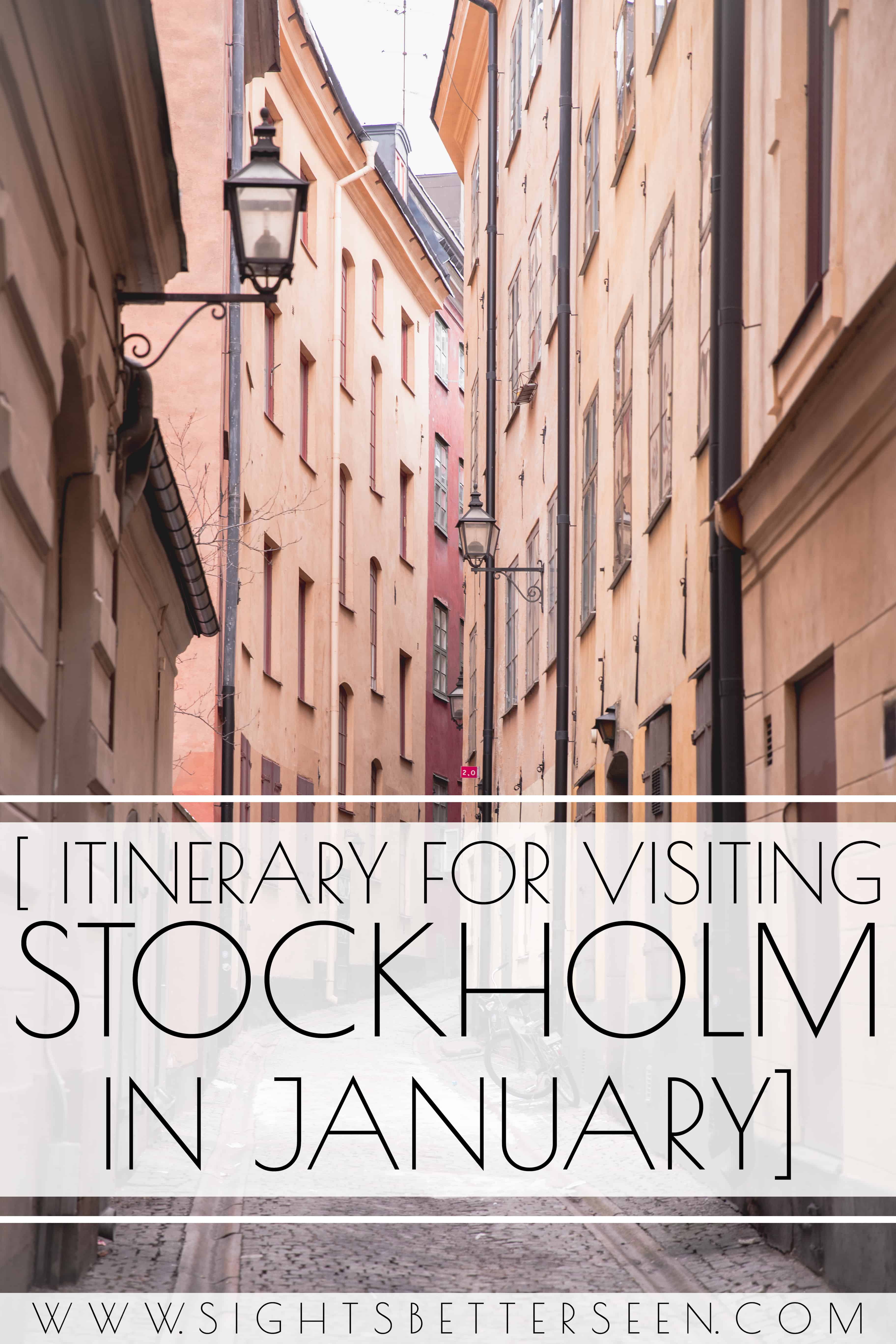 Tweet
Share
Pin51
Share
51 Shares
How to Travel With Other People (& Not Kill Each Other)
Flight Horror Stories: Missed Flights, Stressful Connections, & What NOT to Do