AND IT WAS AWESOME?!

Although we mainly went because we found cheap tickets ($400 USD roundtrip from San Francisco to Stockholm!), my friend and I had such a great time. We went to Stockholm, Copenhagen, and Abisko (northern Sweden). From Abisko, we even did a day trip to Narvik, Norway, which was very exciting for us. We also visited Bergen and Stavanger on a separate trip, in February, and went on a beautiful fjord cruise.

My personal favorite was Abisko, just because I have a fascination with the Arctic and had never experienced anything like it (I grew up in the Bay Area…Enough said). I also loved Copenhagen, and really felt like I could see myself living there one day, even though I’m not really a city lover.

Scandinavia is made up of three countries: Denmark, Norway, and Sweden. It also sometimes includes Finland, Iceland, the Faroe Islands, and the Åland Islands. I’d absolutely love to explore more of Scandinavia – next time!

WHY YOU SHOULD CONSIDER VISITING SCANDINAVIA IN WINTER

It almost felt like there weren’t any other tourists in Stockholm and Copenhagen!

Abisko was a little different, since people specifically go there to experience the Arctic and see the Northern Lights, but it still certainly wasn’t crowded. Especially since we went in January, when there still wasn’t much light (I think more people visit in February and March, when the days are longer but you can still see the lights).

Because less people are visiting, prices are cheaper (supply and demand, ya know?). We snagged an awesome deal on our hostel at The Generator in Stockholm, as well as the place we stayed in Copenhagen.

We saved so much on our plane tickets (thank you, Norwegian – I love flying with them), as well as on some of the activities! Scandinavia is notoriously expensive, so any amount we could save helped.

Scandinavian countries are known for their long, cold winters, so they’ve really mastered the art of staying cozy. So much, in fact, that the Danes gave it a name: “Hygge“! Think of the coziest you’ve ever felt – we’re talking sitting by the fire in a comfy chair, wearing warm socks, drinking a cup of tea, surrounded by Christmas lights and candles. That, my friend, is hygge. And Scandinavian culture knocks it out of the park. I feel like there’s nothing cozier than Nordic cabins.

I also loved seeing the giant light-up stars and candles in the windows of apartments and houses at night.

I think seeing the Northern Lights is probably the number 1 reason people visit Scandinavia in the winter, and it was honestly one of my main motivations!

Definitely check before you go, though – you probably won’t be able to see the lights in all parts of each country. In Sweden, Norway, and Finland, for example, you need to head north and away from light pollution. Although you can occasionally see them in the southern parts, it’s certainly more common in the north. And in Denmark, they’re a pretty rare occurrence.

Abisko is one of the best places to see the lights in Scandinavia, so that’s why I went there! Although we did see them, I admit they weren’t as bright as I’d hoped. So, be aware that there is a chance you may not see them at all, even if you do go north.

Everything is prettier covered in snow (at least in my opinion). In Stockholm, you can even do a boat tour of the archipelago in winter (something we’d planned to do, but ended up not having time for). The cities are gorgeous, and if you venture into nature and the countryside you’ll find ice-covered fjords, snowy mountain tops, and bright red houses blanketed with bright white powder. And in my opinion, there’s honestly nothing more beautiful! I also love the sunrises and sunsets in the winter! Especially the Arctic. They were so colorful!

Ok, ok, ok, I know people who prefer warmer weather are cringing at the thought of single-digit temperatures, but I was living my best life! And to be fair, it really wasn’t that cold in Stockholm in Copenhagen, even for two born and raised Californians. It mostly stayed in the 40’s F (4-9 C) in Copenhagen, and was slightly colder in Stockholm.

Even Abisko wasn’t as cold as I thought – it didn’t even go below 0!

I hope this convinces you to be brave and book a trip to Scandinavia in the winter months. It’ll be a trip to remember at the very least! 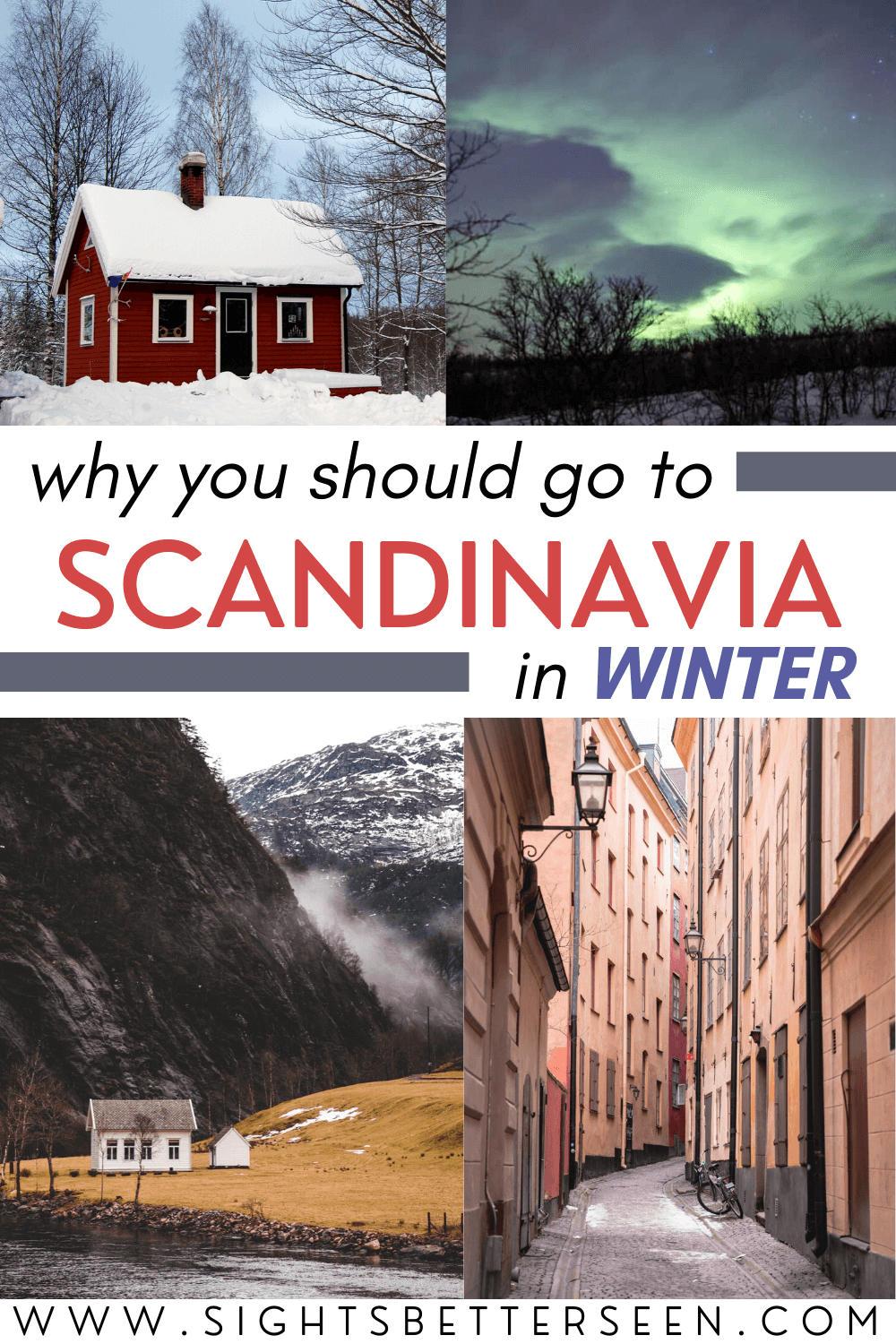 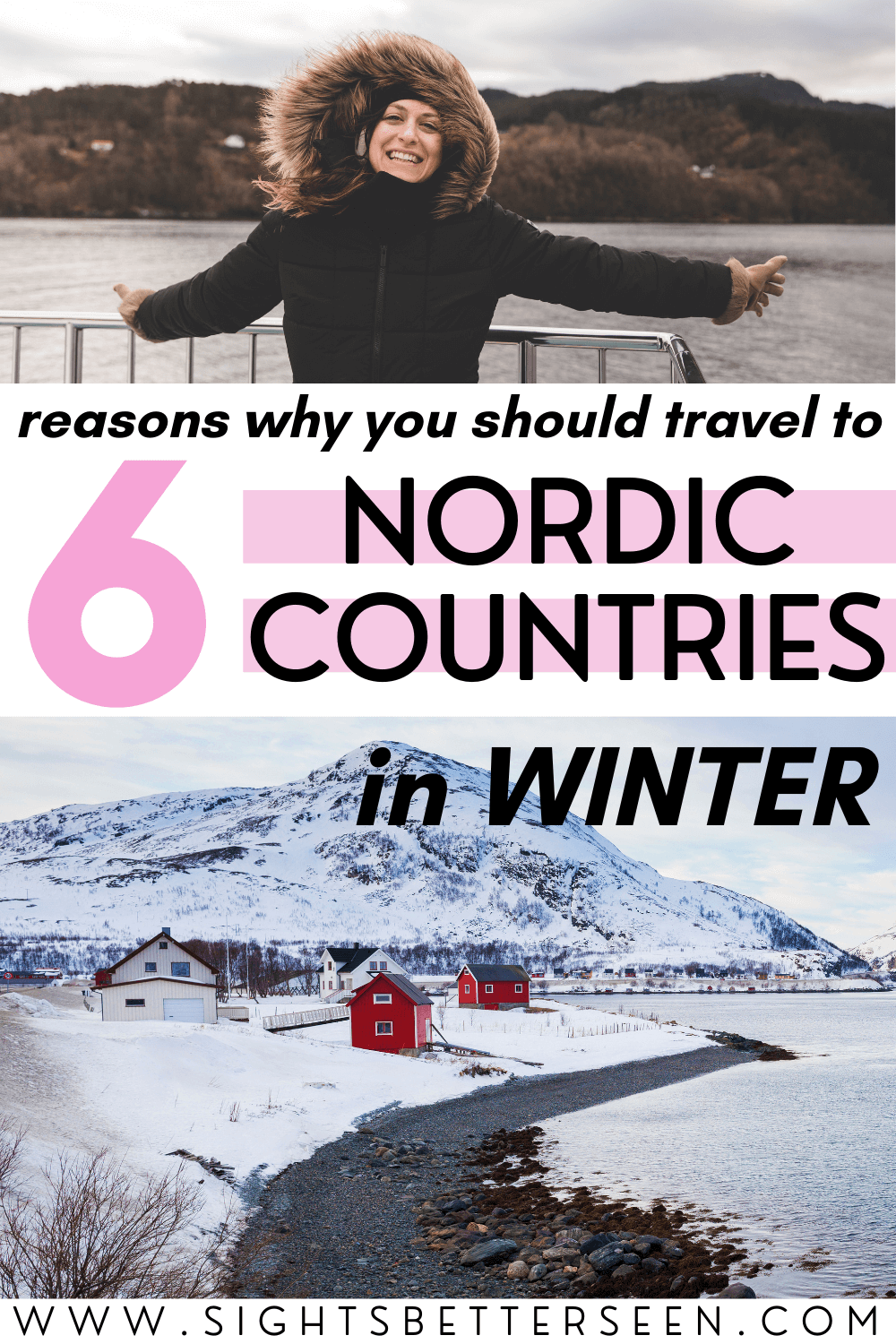 Tweet
Share
Pin91
Share
91 Shares
My Second Year as a Digital Nomad: Reflections from 2020
How to Spend a Weekend in Manchester, UK (If You’re Not a Sports Fan)