Tweet
Share
Pin86
Share
86 Shares
Sylt is a place I would’ve NEVER heard about had it not been for my German friend. Sylt is known as the place that wealthy people vacation, but our peasant selves just did a day trip from Hamburg. It was def a mission as it was about 3 hours each way by train! But I have to say, it was definitely worth it. It was such a pretty place! We brought our own bikes on the train, but you can totally rent bikes there, too (which I would highly recommend since the bike paths are wonderful, and what’s better than biking by the sea?)

On the west side of Sylt, you can take advantage of the more rugged North Sea and do activities like surfing and kitesurfing. On the east side, you can enjoy calmer waves in the Wadden Sea. There are also plenty of beaches for dogs if you’ve got a pup along with you. And in the summer, since it’s so far north, it never gets completely dark at night!

It’s famous for its nude beaches, so prep yourself that even at the non-nude ones you will probably see some skin. Like, I saw people just changing into their bathing suits on the beach lol – and I wasn’t even on a nude beach.

There are lots of things to do in Sylt (even though it’s an island, it’s a big island), and I promise you won’t get bored (if all else fails, just go sit by the sea – it doesn’t really get better than that…) Here’s what we did and what I recommend:

GET YOUR BUTT ON THE BEACH

Well duh, why else would you be going to Sylt? There are so many beaches to choose from there! You do have to pay for them, but it was €4 so not too bad.

We even got lucky and someone gave us their beach chair, or Strandkorb (which literally means “beach basket), for the rest of the day! Normally you have to pay, so we were stoked that we got to hang out in one for free. I believe they’re €8 for the day though, so really not that bad.

The water was so nice, too! I honestly was surprised at what a nice beach it was – not gonna lie, I semi-expected it to be shitty but I’d honestly say it was pretty comparable to a California beach (gasp!!!!)

Definitely not what I expected for northern Germany, that’s for sure (to give perspective, it’s literally RIGHT at the border of Denmark!)

IF YOU GO IN LATE SUMMER, HEIDE ABOUND!

We ended up being lucky enough to be there when the heather (or “heide” as the Germans say) was blooming. I loved staring at the pretty purples melting into the sunset.

You can see the heide at full bloom all throughout August and September, and it makes for a really pretty backdrop!

There are a five different lighthouses on the island you can check out! We biked by the closer one, but if you’re feeling motivated you can go all the way to the other side of the island.

You can see the Rotes Kliff, Kampen (pictured here), Ostefeuer, Westfeuer, and Hörnum Lighthouses. The Rotes Kliff Lighthouse is no longer in operation, but is still pretty to see! And there was actually a school at the top of the Hörnum Lighthouse which sounds SO COOL to me. However, it was closed in 1930, so no, you can’t enroll there (but maybe there’s a waiting list in case it reopens???)

I’m a lighthouse nerd/have a semi-unhealthy obsession with them so staring at this one was one of my favorite things to do in Sylt! I wish I had time to do more lighthouse spotting, but we chose to spend a longer time swimming (the water was sooo nice) so we only had the chance to see Kampen.

I’m obsessed with the old houses there! They have pretty thatched roofs (most are made of reed) and some are newly built, but many of them are really old.

You will pretty much see them all over the island. This is one of my favorite things about Sylt not gonna lie haha.

MEANDER ALONG THE RED CLIFFS

This is a really pretty spot, but tbh the cliffs really aren’t red. So don’t get your hopes up. They are cool, though, and the beach below looked beautiful!

CHECK OUT THE UWE DUNE LOOKOUT

If you go to Uwe Dune there’s a really pretty lookout spot you can walk up to. Just take the wooden steps until you’re out of breath, then go a little further and you’re there!

The cover photo of this post is from that lookout. You can see the Kampen Lighthouse, so many dunes, and pretty thatched houses.

GETTING TO AND AROUND SYLT

You can drive to Sylt, but will have to put your car on the ferry to get to the island. You can also take the train, which is what we did. It was super easy – we just took an RE train from Hamburg-Altona station and it took us straight to Sylt.

I’m not sure of the usual cost since my friend had a coupon he used to purchase our tickets, but should be about €20-30 each way normally. You can buy tickets directly from the Deutsche Bahn website here.

We also took our bikes with us on the train. You have to pay if you do this, it’s €5 per bike (although you don’t for some reason if it’s a folding bike since they’re smaller, but honestly my friend’s folding bike was the same size as a regular bike LOL.)

I would highly recommend either renting or bringing bikes as it’s a really convenient way to get around the island (like, it’s an island but it’s a BIG island.)

If you do borrow a bike, be sure to go to the train early because there are only certain compartments where bikes are allowed and they can fill up fast.

And I’d imagine they’re reliable as it’s Germany and they are perfect about everything. But don’t forget that if you go on Sunday, pretty much everything will be closed – this is one of the things that totally surprised me about Germany lol.

I hope you enjoy Sylt! It was such an unexpectedly cool place. LOVE IT? PIN IT! 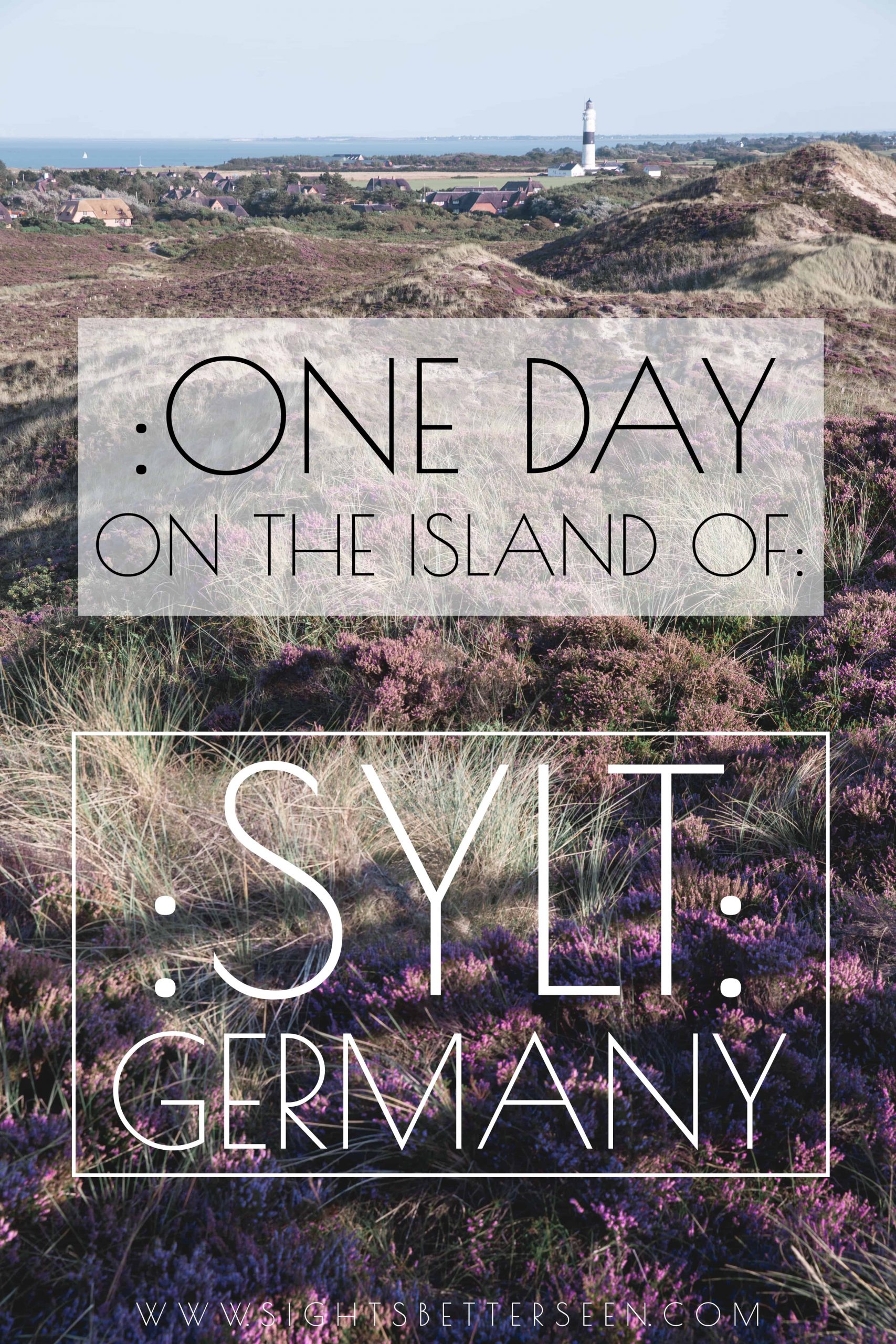