Tweet
Share
Pin100
Share1
101 Shares
Ah, Saltburn-by-the-Sea (or Saltburn for short if you’re ~in the know~.) This is such a lovely little beach town, and a hidden gem (I only say that because many British people I spoke with had never heard of it!)

But don’t fear, although it seems relatively undiscovered, there are still plenty of fun things do in Saltburn-by-the-Sea!

I was in Saltburn for the month of July, and what a lovely (and cold, and rainy) month it was! If you’re looking for sun, sun, and more sun – well, sorry to say that Saltburn MIGHT not be the place for you. Like, it’s rainy and/or cloudy pretty often. But if you’re looking for beautiful beach views then Saltburn is your jam!

Ok ok, I’ll shut up about the weather and get to the point.

THE BEST THINGS TO DO IN SALTBURN-BY-THE-SEA

RENT A BEACH HUT FOR THE DAY

Ahhh you can totally rent a beach hut and have your own semi-private beach partay! According to my research, you can get them as cheap as £15 per day if you rent in the off season on a weekday. They can go up to £50 or more on weekends and during the summer season. Book early for better prices!

This is super old and super cool and super cheap – so you should super do it. It’s literally only £1.10 each way.

According to Welcome to Yorkshire, it’s “the oldest water balanced funicular still in operation in Great Britain.” Like, it was first finished being built in 1884 old. And if that doesn’t make you want to ride it, then I’m not sure what will.

WALK ALONG THE SALTBURN PIER

The Saltburn Pier is England’s northernmost pier! And like the Saltburn Cliff Tramway, also super old (the original pier was finished being built in 1869!). It’s apparently the “last remaining cast-iron Victorian Pleasure Pier on the North-East Coast” according to Visit Saltburn-by-the-Sea, and I’m not sure what exactly a “Pleasure Pier” is but I certainly felt happy when I was there, so if that’s what it’s all about then I’m here for it.

PLAY SOME GAMES IN THE AMUSEMENT ARCADE

Right before you step onto the pier, you can step into an arcade instead if you’re feeling like playing some games. I didn’t go in myself, but it looked fun from the outside!

DO ALL THE OCEAN THINGS

The ocean is so pretty! Even though I never swam in it since it was mostly cold and rainy as mentioned in the previous paragraph LOL. But I liked looking at it, and on warmer days, even sticking my feet in it. So brave.

I was STOKED when I accidentally happened upon a fossil on the beach. Apparently it’s super common in this area, and I was HERE FOR IT.

I believe that what I found is an Ammonite, but if you’re a fossil person, please correct me if I’m wrong!

The Saltburn Woods are a fun place to take a little jaunt and happen to be along the famous Cleveland Way. I spent many a days here as I had to walk through the woods to get from Skelton-in-Cleveland to Saltburn.

There’s a place to get tea at the Valley Gardens Tea Rooms (of course), a miniature railway, giant playground, woodland center, garden, and lots of pretty trees for your eyeballs to enjoy.

If you follow me on Instagram you also may remember me going home at night and accidentally almost falling to my death when I had to climb up this steep, unstable hill – turns out there is a path you can follow and it’s easy to follow. I’m just dumb lol. But you can Google Map it and just keep following the signs for the Cleveland Way through the woods, and that will keep you on a paved path!

GET COFFEE (AND DESSERT)

There are so many places to grab a cuppa – but be aware that they often close early, like between 4 and 5PM. I really enjoyed The Sitting Room, but Virgos, Signals, and Rapps Cafe also looked really nice.

EAT AT A RESTAURANT WITH A VIEW

I actually ate at the Spa Hotel, and the food was DELISH. Plus there’s the VIEW. Unfortunately it was a little chilly the night I was there, so I ended up eating inside, but on a sunny warm evening the patio would be perfect! Oh, and you HAVE to get the Sticky Toffee Pudding. And for all ya digital nomads out there, the Spa Hotel DOES have wifi but it wasn’t working while I was there. However, they don’t have outlets by the tables so make sure your computer is fully charged if you want to eat and work there!

I didn’t eat at the Seaview but it had a nice view of the walkway near the pier.

GET YOUR SHOP ON

There’s no shortage of cute little shops in Saltburn. I saw everything from thrift shops, to art shops, to cool kitschy ones.

And I loved these vintage postcards from Saltburn Station Gallery! It’s located right at the Saltburn Train Station and the only place I could find with vintage Saltburn postcards. They have them from other neighboring towns, like Whitby and Staithes, too, but I specifically wanted Saltburn cards.

And yes, I ACTUALLY sent those postcards this time! I’ve bought postcards with the intention to send them on so many other trips, but this was the first time I actually did it haha.

And I suck and can’t remember how much it was exactly to send them home to California, but I remember it was pretty cheap – the postcards themselves were £1 each and I think it was about £1.50 to send each one.

STROLL ALONG THE SALTBURN CLIFFS

Because everything is better viewed from above. Just be aware that it miiiiight (most likely will) be windy, so bring warmer clothes just in case. Layers are key here (and actually, in all of Saltburn…). But I’m preeetttty sure I saw a juvenile Peregrine Falcon when I was there, so watch out for that, too! Definitely bring your binoculars if you have some. I took the path behind the Ship Inn, but there are tons of paths all over the place! If you take the path behind the Ship Inn, you can walk to The Charm Bracelet, a cool sculpture by Richard Farrington. Each charm represents an aspect of local life. I didn’t actually make it all the way to the bracelet (it’s not far – only about a 40 min walk from the Ship Inn, according to Google Maps) but photos look really cool. If you want to go via Google Maps, just enter “Circle Sculpture aka Charm Bracelet” in and that should take you to the right place! It’s in Huntcliff, not Saltburn-by-the-Sea as an FYI.

Walking at least PART of the Cleveland Way is one of the best things to do in Saltburn-by-the-Sea, in my opinion!

Check out the events going on in Saltburn, especially on the weekends. When I was there, I went to a farmer’s market (happens once a month). There was also a huge food festival, but I didn’t end up going.

You’re a stone’s throw away from other beautiful Yorkshire coastal towns like Staithes, Whitby, Robin Hood’s Bay, and Scarborough! And they’re super easy to get to from Saltburn, either by car or bus (or train – although you can only see Whitby and Scarborough this way).

Even Skelton-in-Cleveland, the neighboring town where I stayed, is worth a visit! The High Street has lots of shops, a pretty church, and there are tons of trails up in the hills that give you beautiful views of the town and Saltburn (the photo above was taken from me taking a 5 minute walk up into the hills!).

DON’T FORGET TO CHECK THE WEATHER!

And idk, maybe this is normal to some people, but coming from California, this is UNHEARD OF.

So in conclusion, bring your layers. Like all of them. Even in summer. Thank me later.

This way you won’t be interrupted when you’re completing this list of all the cool things to do in Saltburn-by-the-Sea!

THEY HAVE FREE BATHROOMS!

HOW TO GET AROUND (IT’S EASY)

You’ll be using Arriva buses, or the 708 bus if late at night, to get around Saltburn-by-the-Sea. Keep in mind that Arriva buses stop running just before 7PM, and the 708 only comes once an hour until 10:45PM.

Make sure you get there a minute or two early – sometimes the buses will arrive and leave a little early. Which is super fun, let me tell you.

However, it’s also a pretty small place so walking is totally doable. But if you want to visit any neighboring towns, the buses will be your best friend! Although you CAN also walk if you’re feeling like doing an all-day jaunt.

I hope you enjoy this gem of a place! It’s so pretty, and there’s still so much more to explore. There’s no shortage of fun things to do in Saltburn-by-the-Sea! 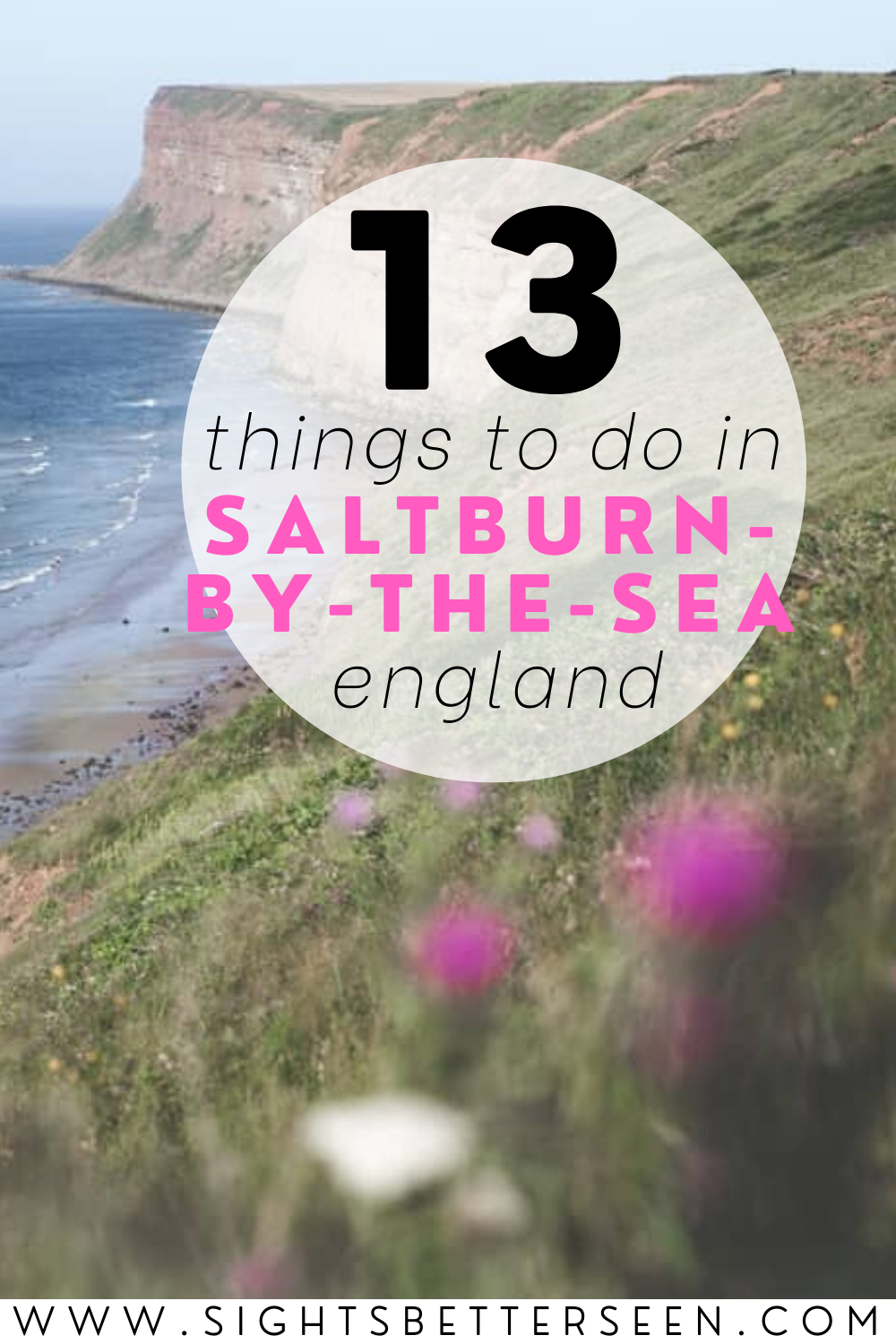 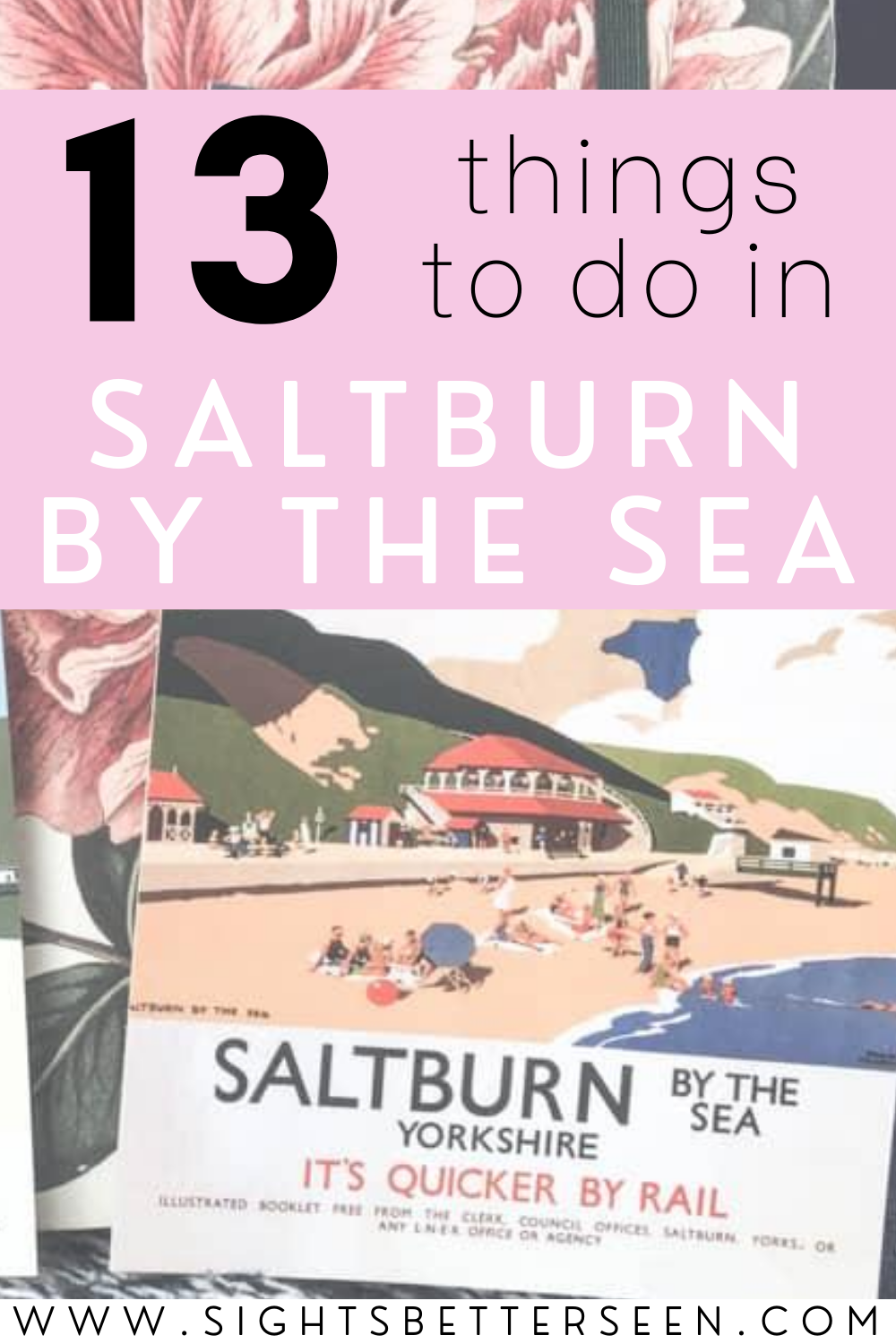