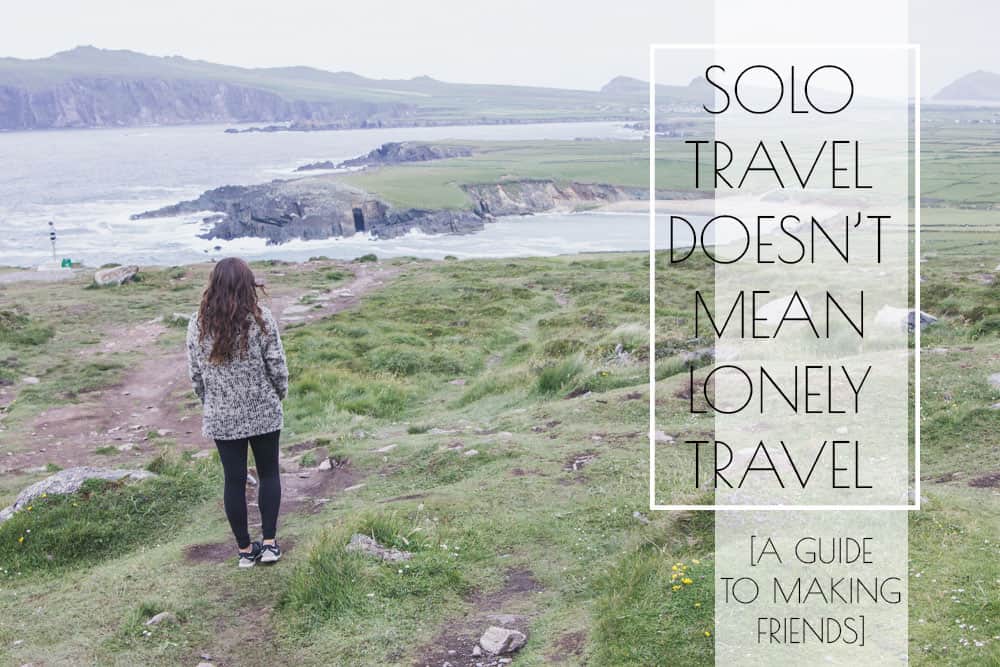 Okay so – I was terrified that I would make zero friends if I traveled solo. I’m an introvert, and can easily sink into hermit mode if I’m not feeling motivated to socialize.

I can be outgoing when I want to be, but I don’t always want to be – I was afraid I’d end up having a major pity party while everyone else was laughing and having a great time.

But – spoiler alert – that DID NOT HAPPEN! For the most part. There were definitely a few nights where I felt like a big ol’ lame-o (it’s a vicious cycle: I feel like being alone so I don’t try to meet anyone, but then I hear people laughing together and I feel bad for myself. SIGH).

But most of the time, it was easy to meet people and I’m now super hyped on solo travel! 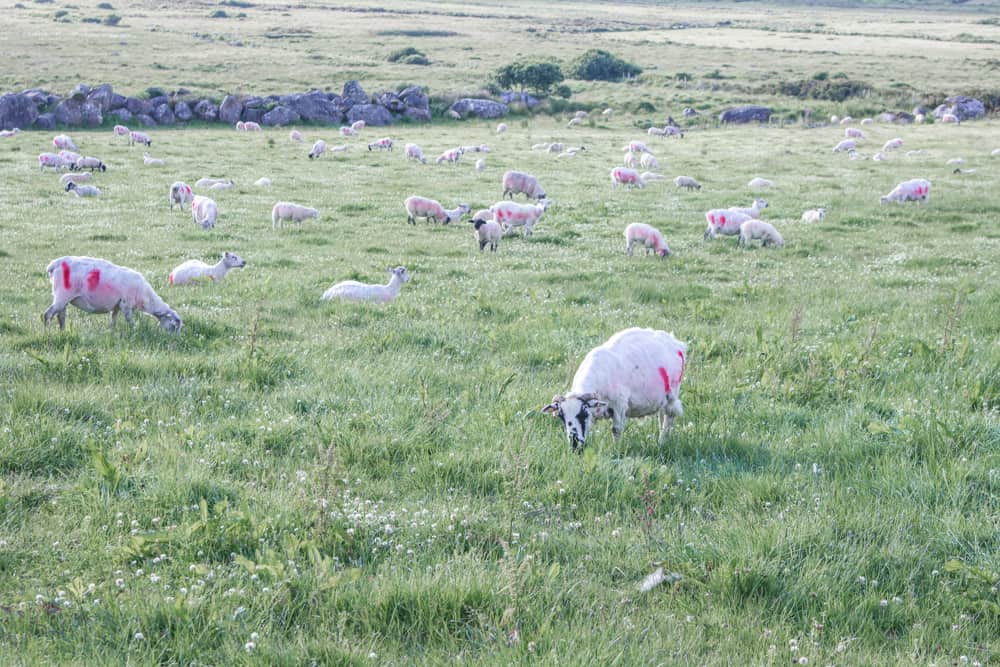 And so, in my (very humble) opinion solo travel is one of the best kinds of travel. Just because you can literally do whatever the hell you want.

I also think that, ironically, you end up meeting more people when you travel solo, just because you’re more open to it than if you were with someone else. At least for me, anyway.

I think I ended up spending about 70% of my time with other people, and 30% by myself! I definitely figured that out with an extremely detailed mathematical equation, and not by guessing at all. Just FYI. 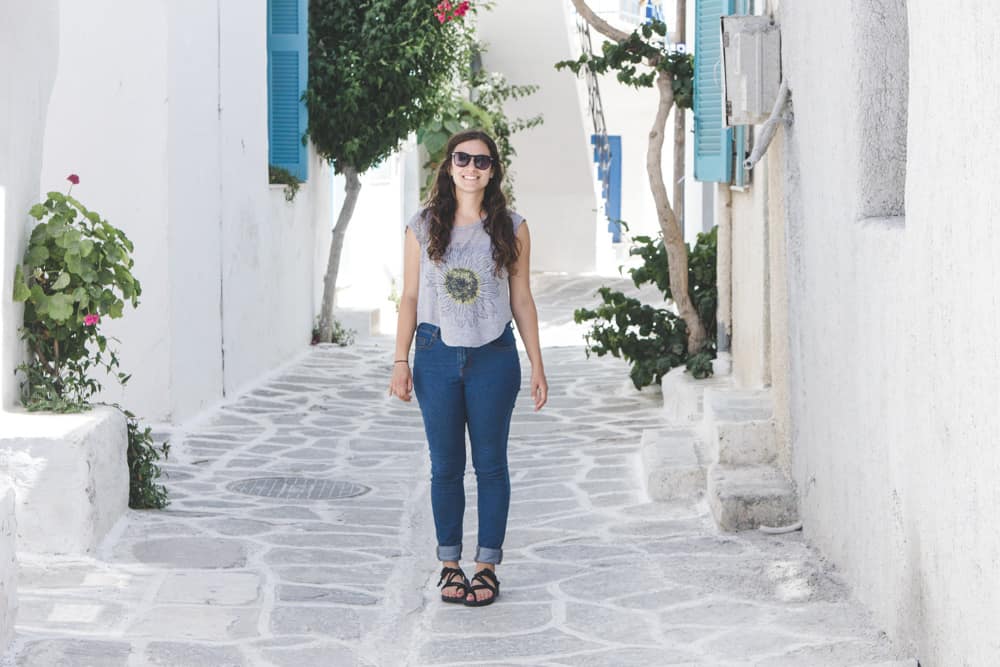 [Surrounded by friends once again in Paros, Greece – my new friend Andrew took this while we were exploring together! Or did he? Maybe a random stranger took this? You’ll never know]

How do you meet people when you travel solo, you ask? Here are some tips:

STAY IN A HOSTEL

It’s so easy to start up conversations with other bunkmates, or random people in the common room! Just follow the typical script:

I guarantee that just one of these questions will get the conversation going, because the only thing wanderlusters love doing more than traveling is talking about the traveling they’ve done.

Just look at how many damn travel blogs there are (including this one…).

And how many times you’ve rolled your eyes when your friend who just got back from SE Asia was like, “well when I was in Thailand…”.

Also, many hostels have socializing nights or offer tours – ask the front desk! Check on Hostelworld and make sure you read the reviews, because some hostels may be more geared towards socializing than others – I’ve been in hostels where I made tons of friends and some where people didn’t hang out in the common areas as much. It all depends – read the reviews!

Boom, instant friends! I have yet to try couchsurfing, but I’ve mostly only heard good things about those who have done it.

That said, you definitely need to be careful. Make sure the person has quite a few reviews – NEVER stay with someone without them, especially if you’re solo. Also, trust your gut – if a situation feels weird, get out immediately.

If you don’t want to stay with someone, they also offer a service where you can simply meet up with a local during the day who can show you around! As far as AirBnb, I’ve met awesome hosts everytime I’ve used it, and they often give great local tips! But again – READ THE DAMN REVIEWS.

I found other solo travelers on every single walking tour I went on! Granted, I was traveling during the high season (summer) but I think solo travel is becoming so much more common these days.

Try to get to the tour meeting spot early and people will be chatting, and you may meet another solo-er or cool group right away! During the tour, I would zero in on someone that I had a feeling was solo (because they weren’t walking with or talking to someone else) and go up to them (AKA I’m a stalker, but let’s overlook that…).

Sometimes it took me like half the tour to get the guts to do it, but I usually ended up exploring with them afterwards, and sometimes even spent a few days traveling with them. I would suggest doing the walking tour right away, as you can meet people and then have a friend to explore the city with!

Even if you’re ballin’ on a budget, there are often cheap group tours and packages you can take advantage of. When I was in Ireland, the hostels I stayed at all offered various bus tour packages for about €30 euro (and don’t forget to flash that student ID for a little extra sumpin’ sumpin’…and by that I mean discount! An extra discount! Get your head outta the gutter).

When I was in Santorini, Andrew and I went on a €20 boat tour with a girl I met in my hostel room. Ask your hostel/hotel if they offer or know of any organized excursions! Oftentimes, they do.

It can be a little nerve racking to go by yourself, but I promise you it’ll be alright! I met a few other solo travelers doing the same, and everyone in my group was super friendly.

It was pretty easy to make friends, and I even ended up exploring Galway with two girls I’d met at the Dublin pub crawl (hi Kay & Tanya!)!

SIT NEXT TO SOMEONE ON A BUS/PLANE/TRAIN, ETC.

…And strike up a conversation.

I met a really cool girl on a train once and we ended up talking the whole 6 hour ride. She told me all about how she graduated high school and said efff social norms (at least in the states, going straight to college is the norm – I know in other countries it’s more normal to take a year off and work/travel etc.), and instead of going straight to college she backpacked around Australia by herself, even though her parents were less than thrilled.

And she didn’t really have a plan – just did odd jobs and WWOOFED along the way. WHAT. This was my first foray into the world of solo female travel and after talking to here I was like WHOA. I NEED TO DO THAT.

Facebook groups (such as Girls Love Travel, Women Who Hike, etc.) are a great way to meet people! You can post in the group and state the city you’ll be in and when (I wouldn’t suggest posting your exact location, just in case) and see if anyone wants to meet up.

Or, you can join a meet-up that’s already been created! Instagram is also a great way to make friends you can meet up with overseas.

LOL. This one is mostly a joke, but I only met Andrew because I looked super confused on the train and he walked up to me and asked if I was as lost as he was. We ended up traveling through Greece together!

Maybe don’t do this if you’re walking around at night, or in a sketchy-feeling area, though. Again, use your best judgement!

**Don’t be afraid to talk to people. I know it’s scary, but you’ll literally NEVER HAVE TO SEE THEM AGAIN!!

If you say something super awkward you can always exit the situation pretty easily and then NEVER SEE THAT PERSON AGAIN.

I guarantee that most likely they’ll laugh, though, and you’ll make a new friend! A lot of the travelers I’d met were extremely friendly and inclusive and WANTED to make friends. So go out there, and say hi!

All that said, don’t feel like you HAVE to meet other people if you’re traveling solo. There were definitely days I just did NOT feel like trying to make friends, so I just went around by myself.

That’s the beauty of solo travel – there’s no one there to judge you for wanting to be alone. You just do you boo.

[Yes, I am aware of the crap quality of these photos…But I need to prove to the world somehow that I made friends other than sheep! From left: Andrew and I at Meteora, my Ireland camping & hitchiking friends at the Cliffs of Moher (Hag’s Head), and Tanya and Kay and our baby Guinnesses!]