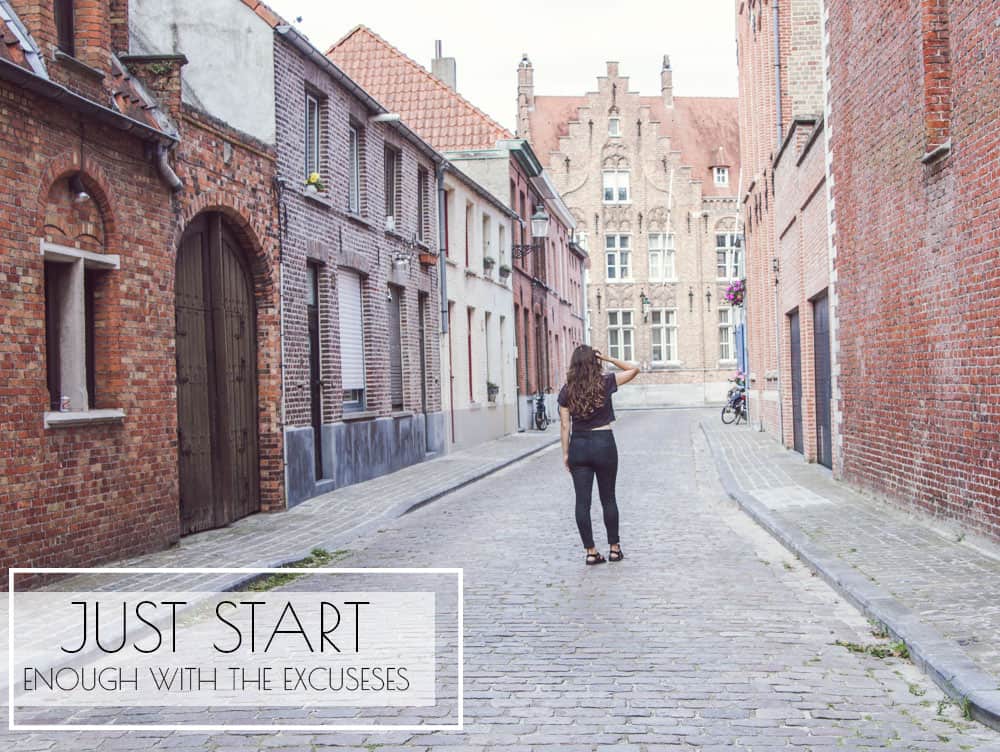 [A random street in Bruges, Belgium – somehow we were able to escape the tourists]

“Starting” something is NEVER as glamorous as they make it look in the movies.

There’s no swell of music or careful camera angles –
It’s just you and yourself in your messy room, deciding to do something.

This is what I’ve learned. So often I’ve waited, waited for the perfect time, or a sign, or for someone to tell me to do what I’ve been longing to do. Waited for some sort of ‘permission’, if you will. Permission from the universe, from other people, from myself.

Like with this damn blog, even. I waited soooo long to start (like over a year…), even though I knew that’s what I wanted to do. But I put it off because I “couldn’t think of the right name” and “was still working on the design” and “didn’t have enough drafts written” and a myriad of other excuses I told myself.

And now I wish I’d started earlier, because life isn’t some sort of elementary field trip – there’s no parental guardian to sign a slip that says, yes. You’re allowed to do that.

It’s just you driving that damn bus, deciding where to go and how to get from A to B or A to Z.

There’s never going to be a perfect time to start – the universe isn’t made for you, so the stars just aren’t going to magically align. (Although I’ve found, and heard, that when you put forth EFFORT into the universe, sometimes they do. It’s the sitting and waiting around part that gets you nowhere).

And yes, this sounds incredibly cheesy, but who cares. I sure don’t, because guess what, this is me starting. And also not caring what anyone else thinks (although sometimes, not gonna lie, I still do – but you gotta start somewhere!).

And whatever it is you’re starting – you’re going to make mistakes. Lots of them (trust me – I’ve made my fair share and I’m sure there are many more in store).

If you don’t, well – you’re probably not taking enough risks. I think that’s what life is about, that’s what gives you clues that your heart is still beating and blood is still pumping.

Who wants to go through life like a robot? I’d rather live mine out loud, full of color and love and passion. I’m still working on this (I think I always will be – constantly fighting who I really am with the idea in my head of who I think I should be), but life is a work in progress, right?

So go. Take this as your sign. Line up at that starting line, but don’t wait for the gun to off – just go.