IS AVEIRO, PORTUGAL WORTH VISITING? 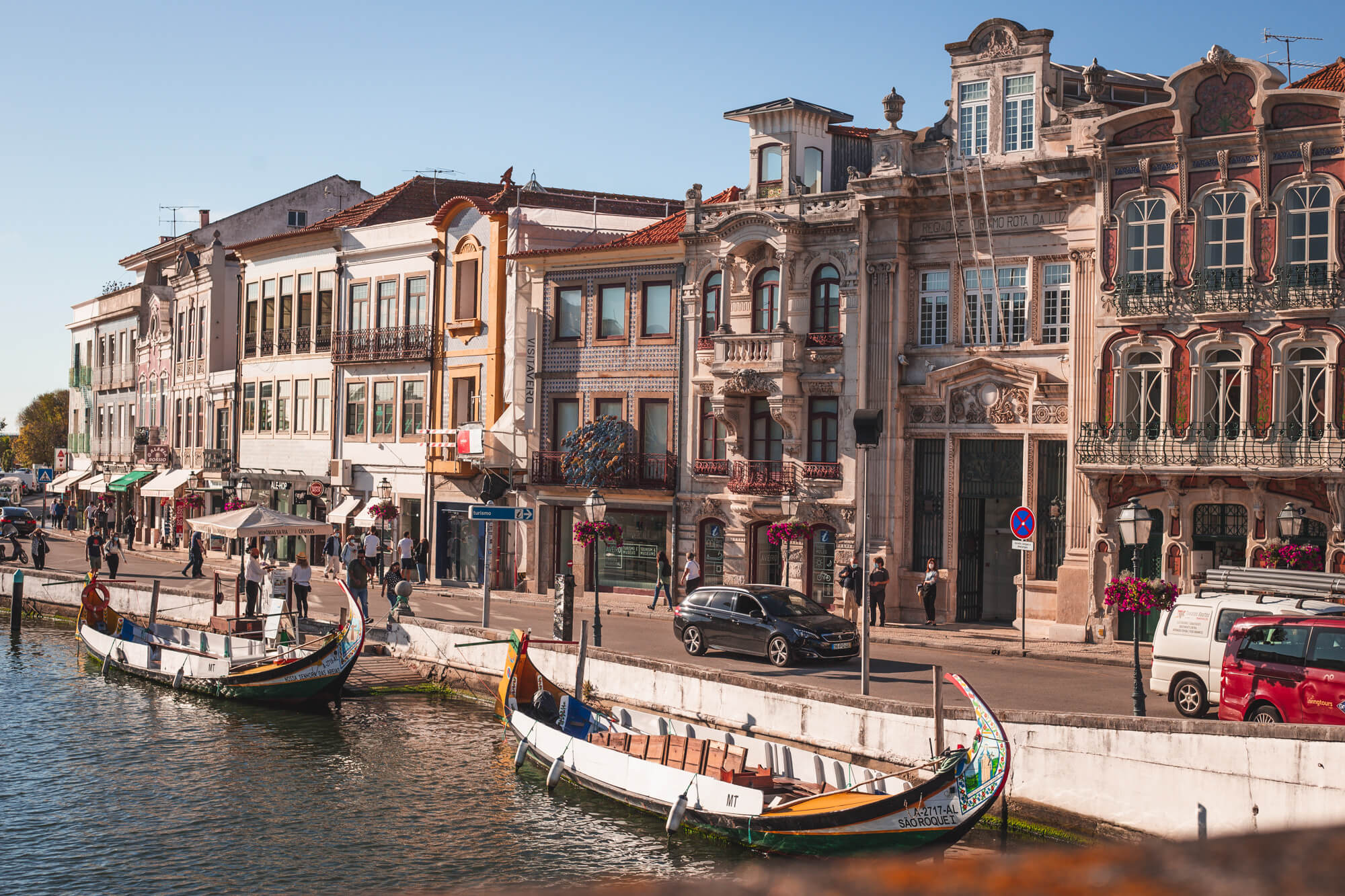 That’s something that I admit I also wondered myself. But then we found a house sitting gig for a week watching the most adorable cat, said what the hey, applied, and got it.

So Aveiro it was! 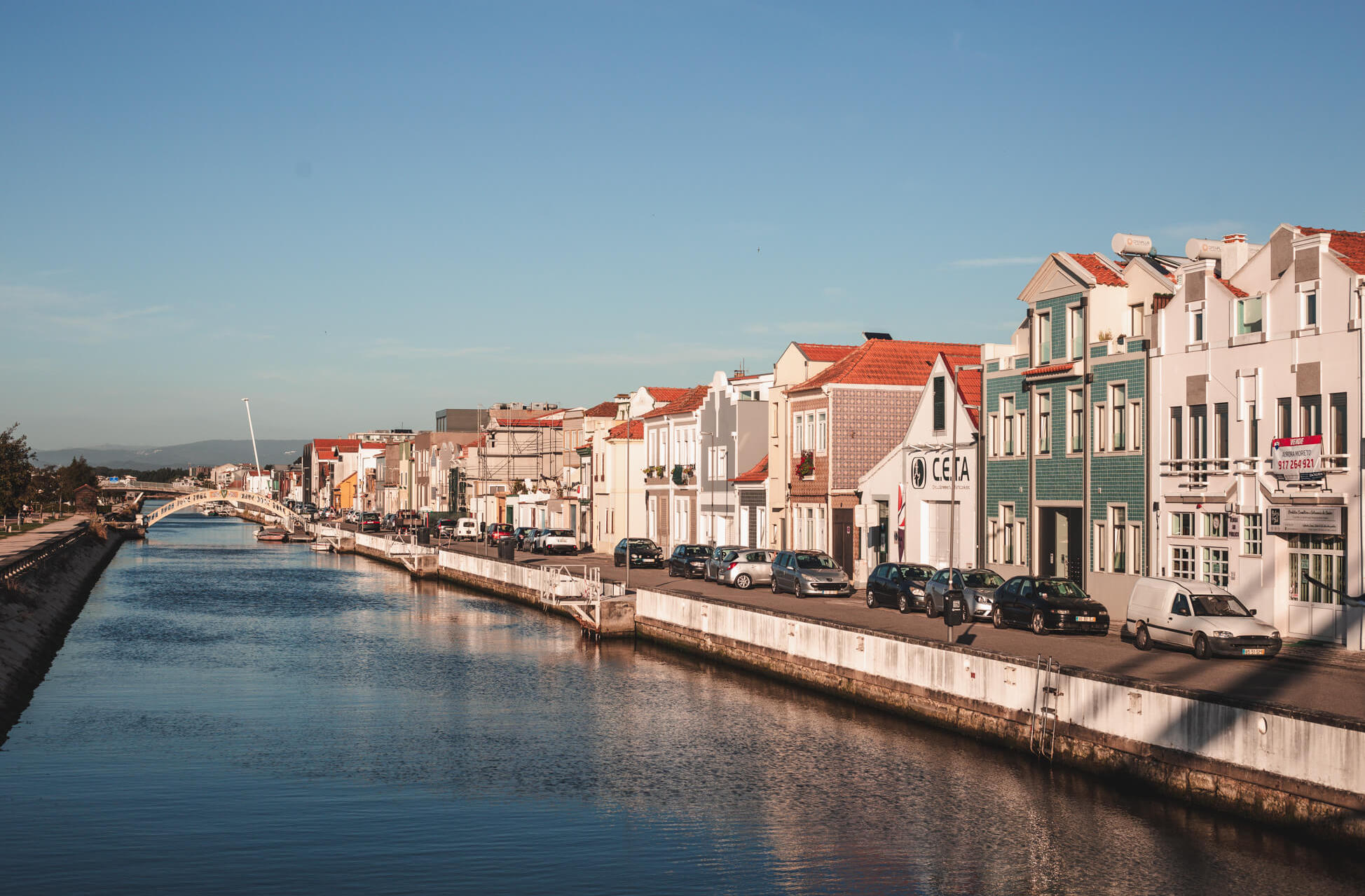 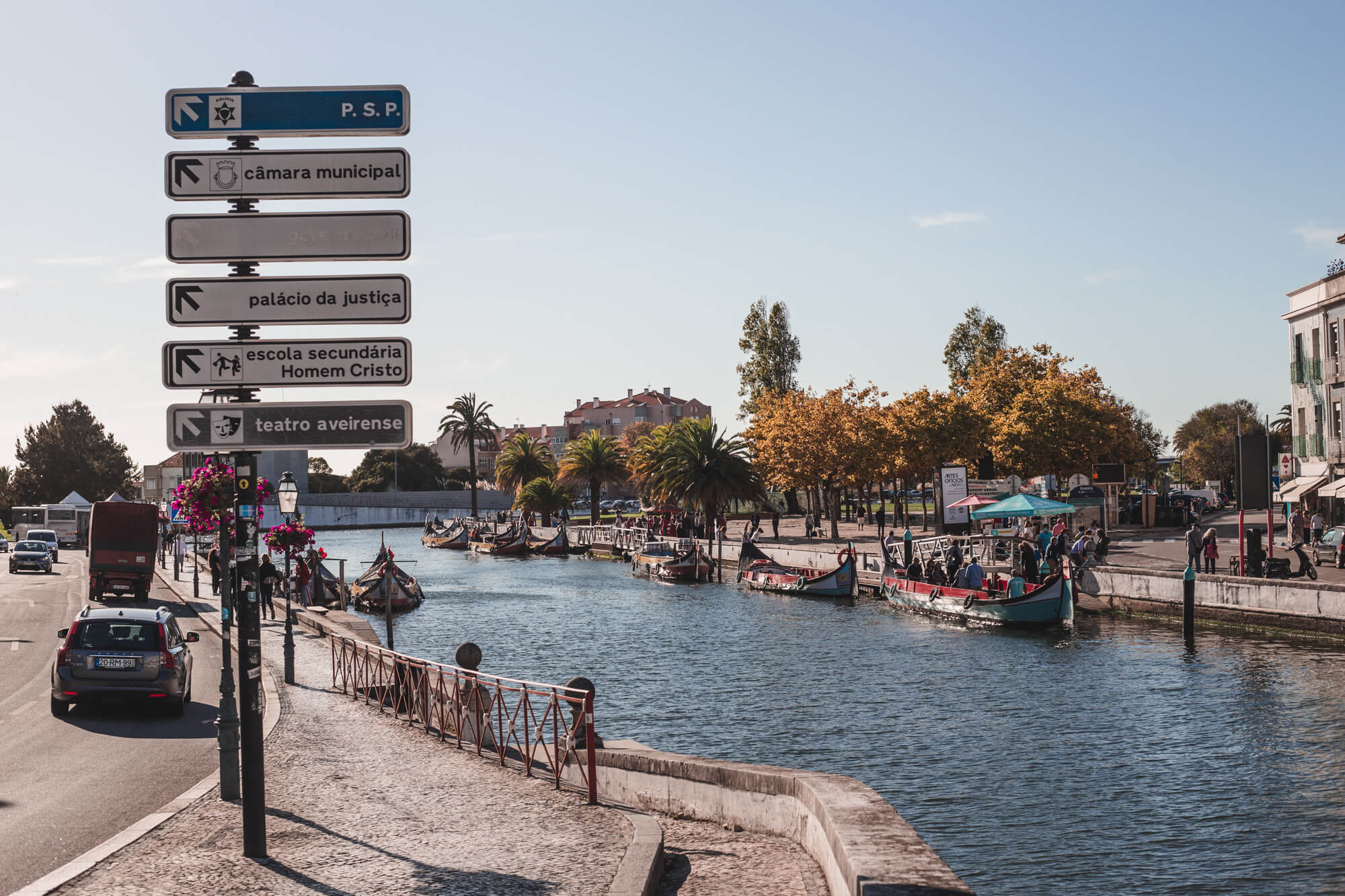 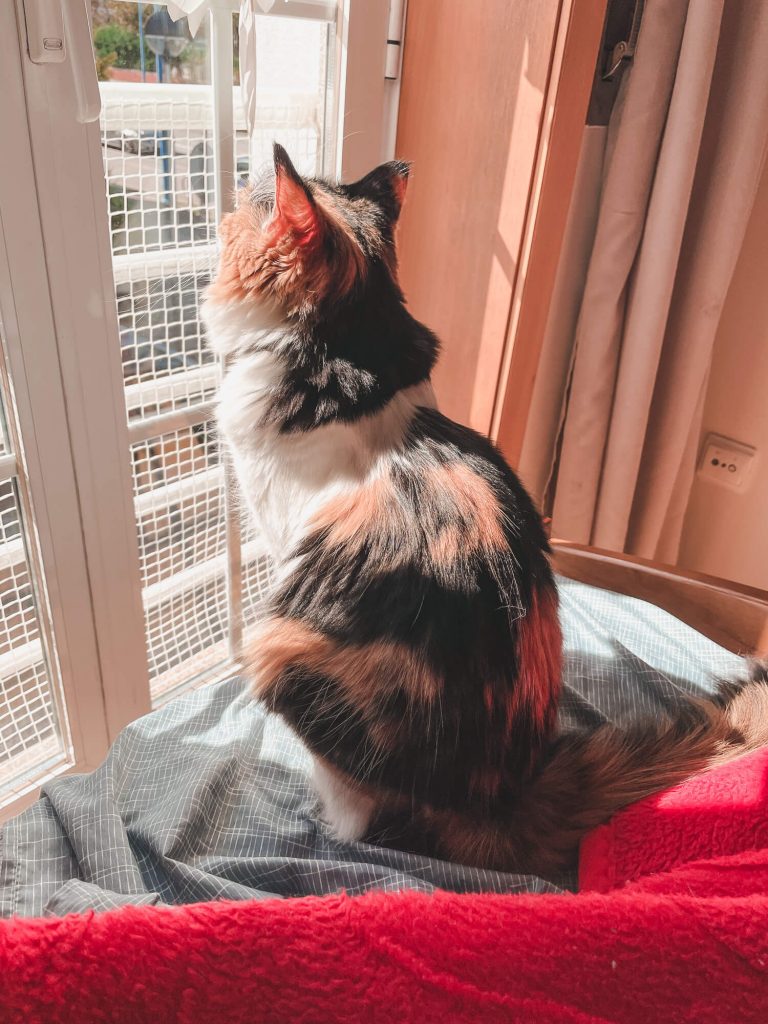 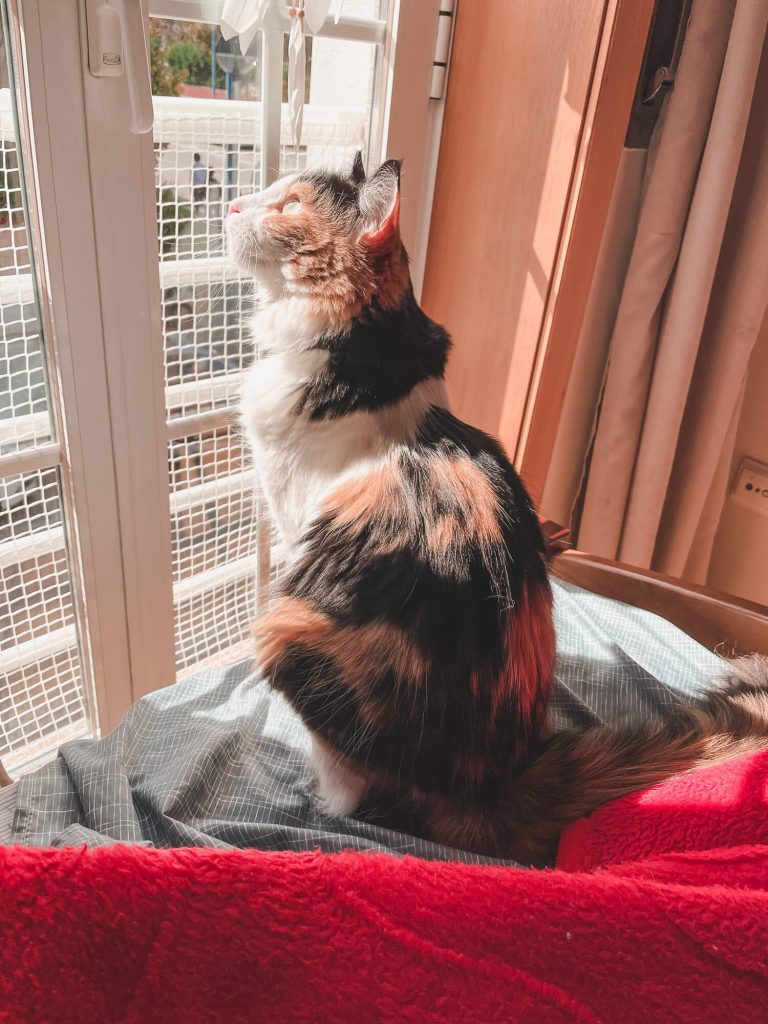 I admit that while Aveiro was an adorable city, it wasn’t exactly my favorite. Ultimately, I don’t think it’s worth it to go out of your way to visit, but if it’s on your way or you’re looking for a cool day trip from Porto, then why not?

If you do decide to check it out, here’s a one day itinerary for a day trip to Aveiro! 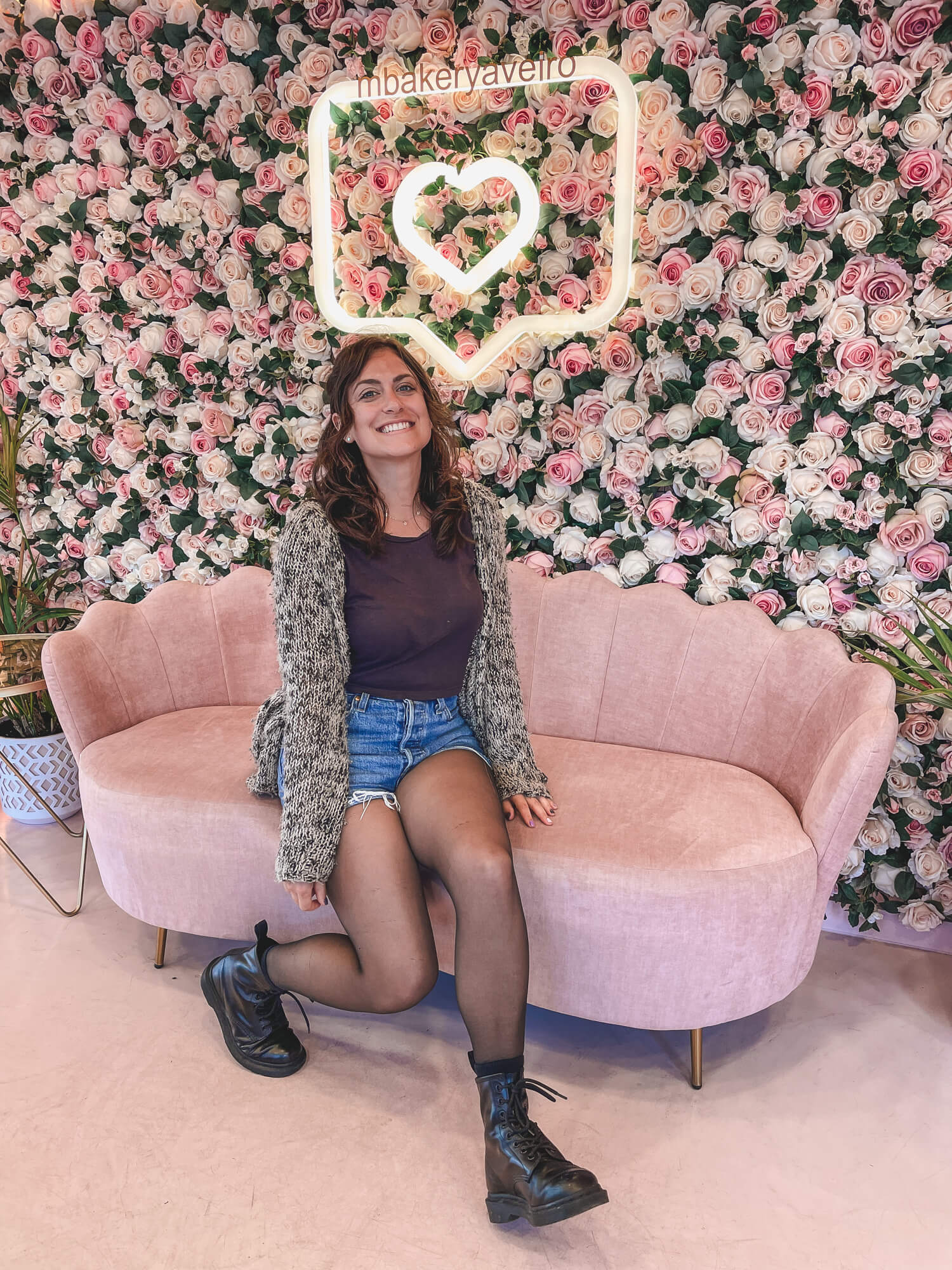 M bakery is an Instagrammer’s paradise – every detail is so well thought out! The food is beautifully presented and delicious. Pro tip: if you’re there for breakfast, get the M Bakery eggs. We were originally just going to go with regular ol’ Eggs Benny, but our waiter convinced us to try this version because they fry the poached eggs. I’m not normally a huge fan of fried foods, but this was amazing!

I also got a latte (love how they serve it to color-blocked perfection). My friend ordered the Coffee Bombom and was a little less impressed; for some reason I’m not seeing the latte I ordered on the menu right now, but just show them the above photo and ask for that drink!

I’d also highly recommend getting a croissant from their bakery (or anything from their bakery, really…). My friend and I tried the Kinder Bueno and the Pistachio versions, and both pastries were swirled in chocolate and filled with a cream of the namesake. Do it do it do it!

They also have really good looking drinks and cocktails, which sadly, we didn’t get to try, but I saw them on other people’s tables and they looked amazing. 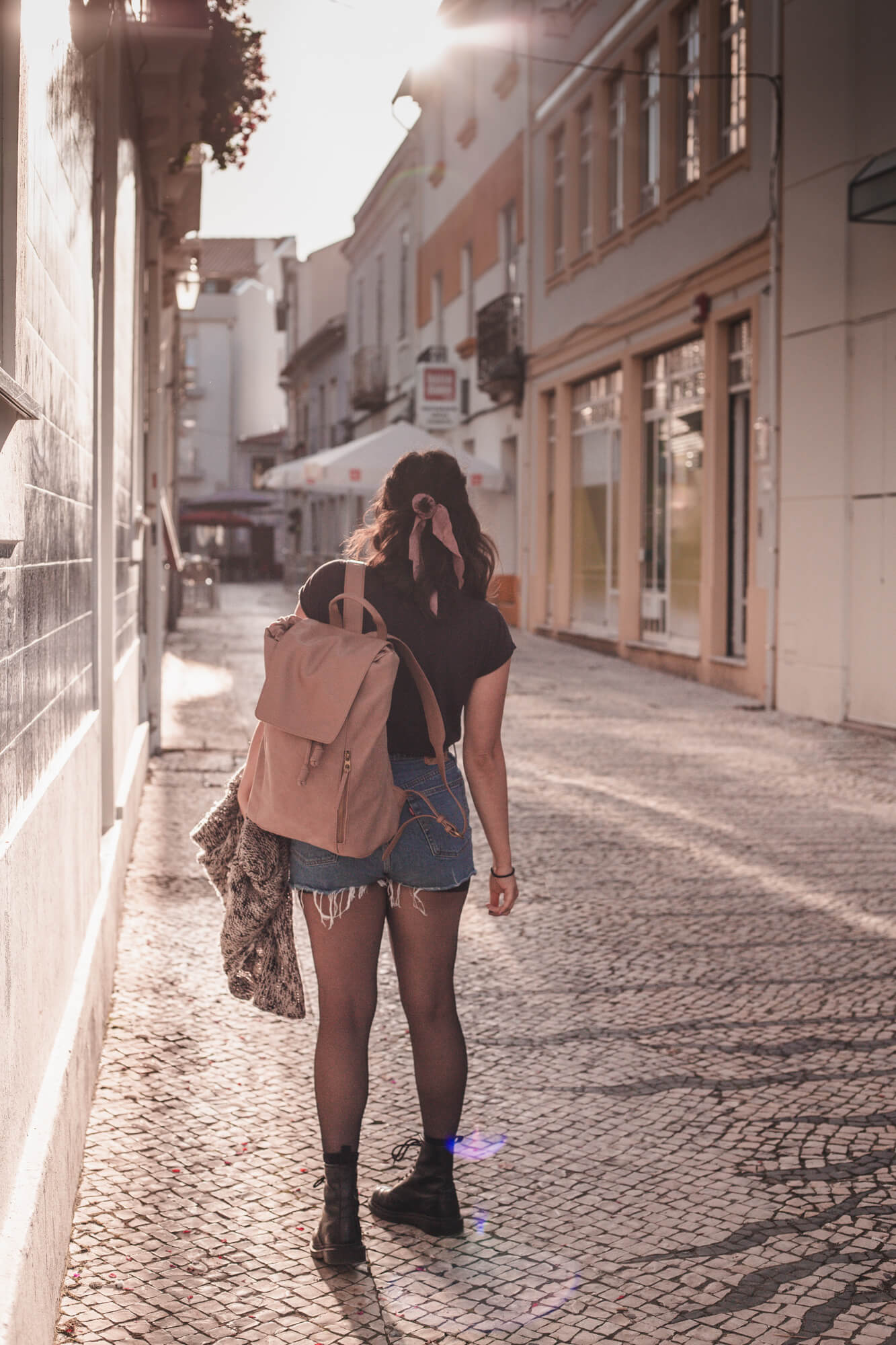 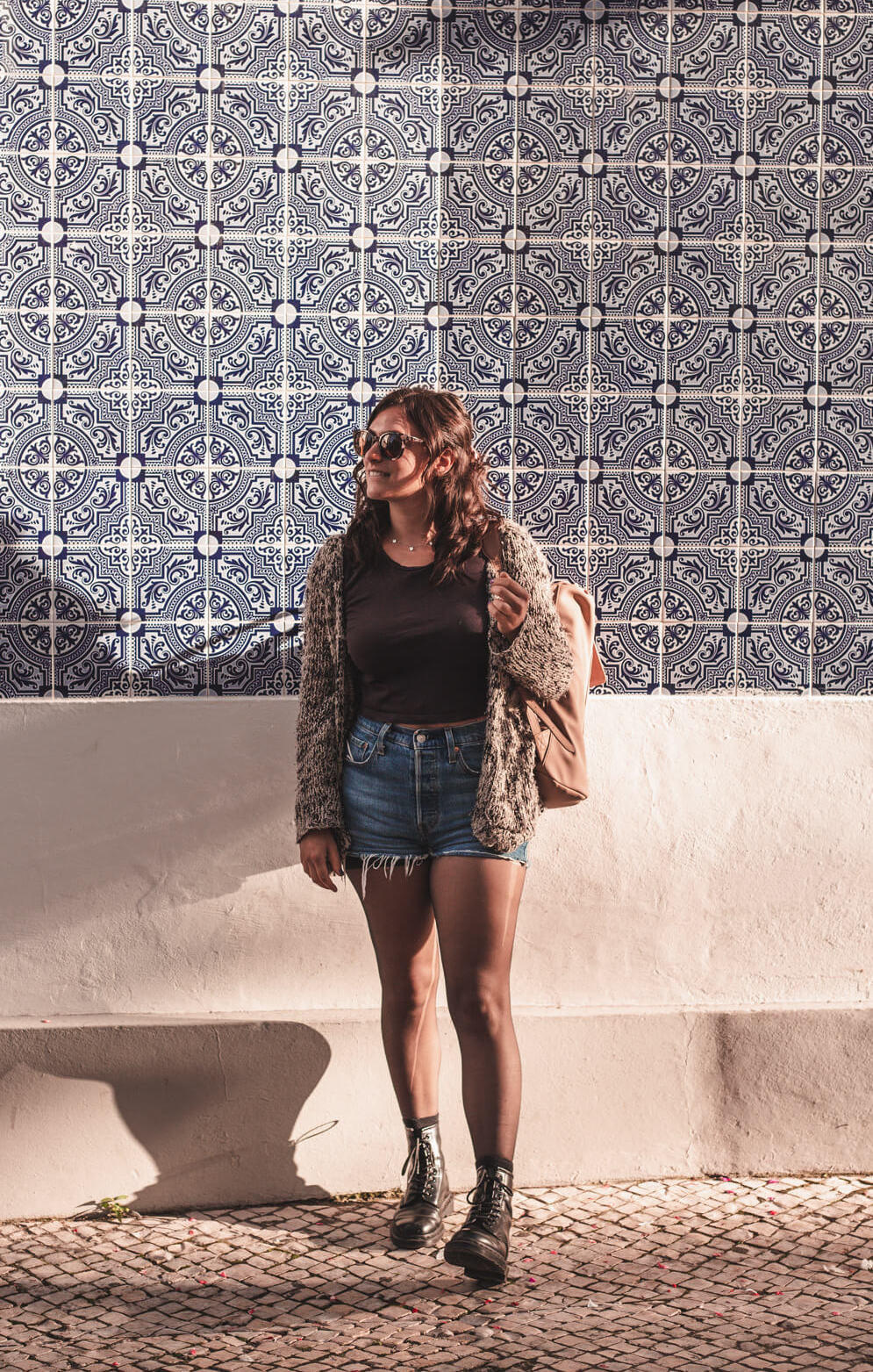 From M Bakery, you can easily walk downtown in about 5 minutes. The downtown area of Aveiro is really pretty, complete with cobblestone streets, buildings covered in azulejos (blue tiles) and other colorful tiles, cute little shops (several of which were focused on sustainability, which we were happy to see!), and hipster coffee shops.

If this is your first time in Portugal, you should absolutely order a ‘Galão’! This version of coffee is similar to a latte, and made of 3/4 milk and 1/4 espresso served in a giant glass. I ordered them all the time while I was there…Some things just taste better in Portugal?

If that much milk isn’t for you, you can also try getting a ‘Meia de Leite‘, which is similar to a cappucino (but without the foam), and consists of half milk, half coffee.

So ovos moles is something everyone says you need to try, but I, uh…Hated it?

My friend and I both couldn’t get past the (overpowering?) eggy flavor, and we sampled them from different bakeries. While I recommend that you try it for yourself as it’s one of the things Aveiro is most known for, we just couldn’t get into it. But who knows, maybe you’ll love it! I’m sure some people must and that’s why they continue to sell?

You can find the seashell-shaped wafers filled with an egg custard at most bakeries in Aveiro, but the two universal favorites seem to be Casa Peixinho and Maria da Apresentação Da Cruz Herdeiros.

If boats are your thing, try a gondola ride on one of the traditional ‘Molicero’ boats! I admit we skipped this (we just wanted to walk around rather than sit on a boat?), but they’re super famous, and considered one of the best things to do in Aveiro.

This is the reason Aveiro is nicknamed ‘The Venice of Portugal’ and while I haven’t been to Venice, I would argue that the name is quite generous. I don’t really think Aveiro looks anything like Venice (from what I’ve seen in photos), and kinda think someone just wanted something to call it? I don’t know, it’s a little confusing, but…Here we are!

This is that famous beach with the colorful striped houses that everyone takes photos in front of.

The beach itself wasn’t anything out of the ordinary, but if you like beaches you’ll be quite happy here. We also happened to be there during low tide and found a bunch of shells, so that was pretty cool! 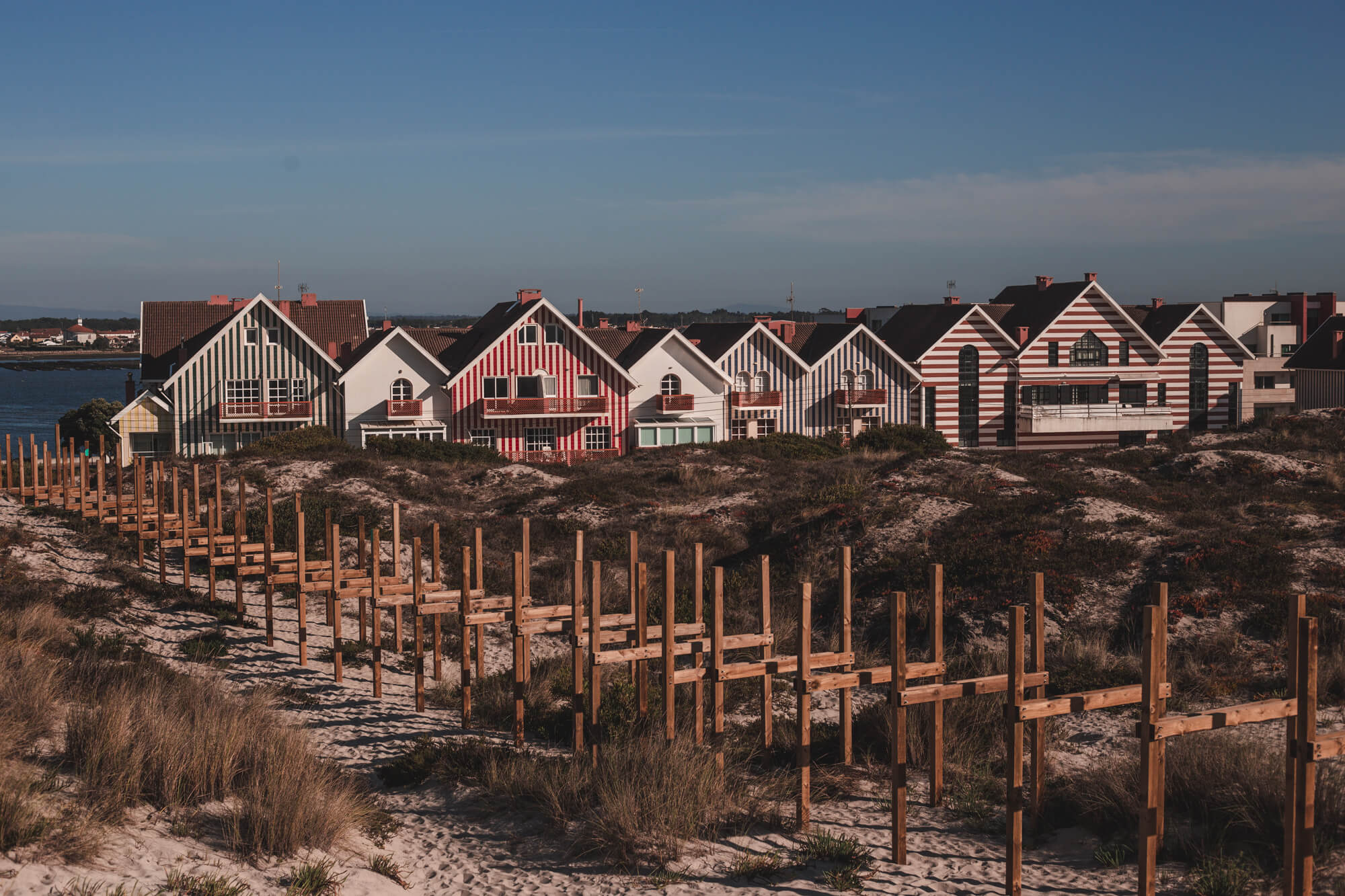 The houses were pretty fun. They were bright and pretty, and we just kinda walked around and found them. However, don’t expect it to be a giant downtown area (like we’d thought it might be), it was more like a few of them scattered here and there. Still cool to check out, though!

We couldn’t find any good public transportation, so we just took a Bolt from our house sit. Bolt is similar to Uber, but one or the other is cheaper so you may want to check both.

There are so many great spots to grab dinner in Aveiro! I’m vegetarian, so unfortunately, I can’t recommend a seafood restaurant. However, we went to this cozy italian spot called ‘Yeah Aveiro!‘ that was awesome! It’s a super cozy spot with a hodgepodge of tables surrounded by comfy chairs and couches. It’s quite popular, so you may need to wait for a table!

This is just turning into a ‘what to eat in Aveiro’ guide, but for some reason this little city has so many things to try! ‘Tripa’ is similar to a crepe, so if you like crepes, you’ll love Tripa.

We got ours from a street cart in front of a restaurant below our hostel, Ponto de Abrigo, and it was delicious. It looks like Tripas da Praça serves them, too. Definitely one of the best sweets to try when visiting Aveiro!

WHERE TO STAY IN AVEIRO

My friend and I were originally supposed to be house sitting for the entire duration of our stay, but the homeowner ended up getting sick and came back a day early. So, we booked a last minute private room at Ponto de Abrigo (Shelter Point). While the Wi-Fi didn’t work well in our room, everything else was nice and it was really affordable, especially when split between two people. If you’re looking to stay in Aveiro on a budget (and willing to take a gamble on whether or not you’ll get a room with good WiFi), this place might be a good option!

Luckily, getting to and from Aveiro is super easy via train. We went to Aveiro from Porto, and then from Aveiro to Lisbon, both without any trouble. The train station is beautiful, too, and adorned with the famous azulejos (blue tiles) that Portugal is known for!

Use the ‘Comboios de Portugal’ site to book them, and the further in advance you do, the cheaper they’ll be!

Aveiro is pretty small, so we found it quite feasible to walk everywhere. However, you can also rent a bike if you wish to go beyond the city limits, which we looked into doing while we were there.

‘Loja Buga‘ offers free bike rentals for 2 hours (however, if I remember correctly, it was closed while we were there), while BICLARIA and Pernalonga look like good paid options if you wanted to rent bikes for a longer period of time.

We originally wanted to bike from downtown Aveiro to Costa Nova, but the bike path would’ve been down a busy road, so we opted to take a Bolt instead.

You can also take Bolt, Uber, and taxis from the train station to your place of accommodation, or just to get around the city.

Or, if you’re feeling adventurous, why not rent a van to explore Portugal with? That’s what we did after we left Aveiro, and it was so fun! 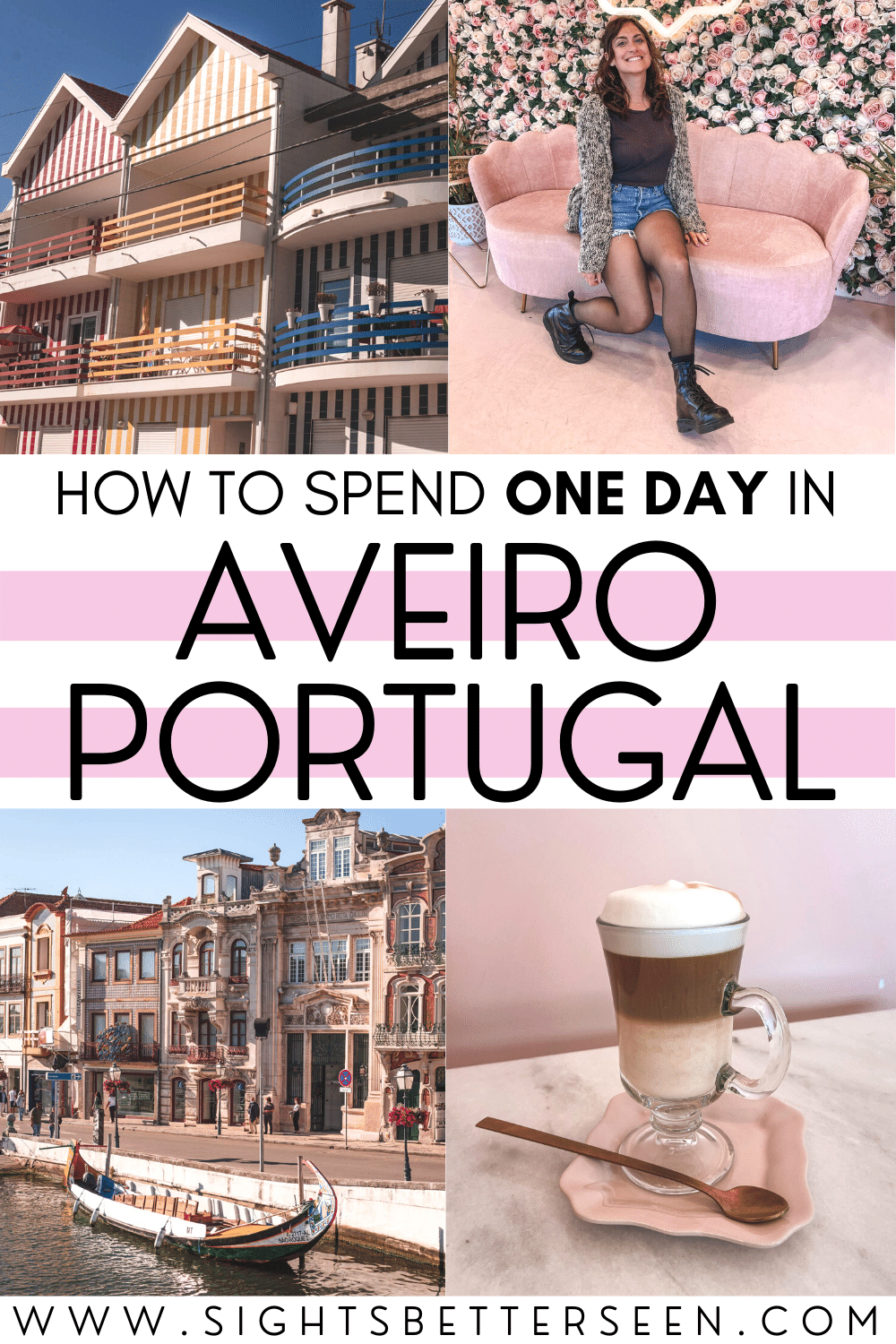