Tweet
Share
Pin5
Share
5 Shares
House sitting is amazing. I’m obsessed with it. But it’s also a LOT of responsibility – you’re usually not just watching people’s homes, but also their pets. Pets are family, so you definitely want to be sure that Fido is taken care of properly.

So what happens when things go awry?

Let’s go back to the house sit I scored in Hamburg, Germany in August 2017. I just want to gush for a second – it was PERFECT. I still don’t really understand how it even happened – I genuinely think I somehow manifested it?

I’d been looking for a house sit in Hamburg because I wanted to be closer to the guy I was dating at the time (full transparency, lol). I also really liked Hamburg (and still do – it’s one of my favorite European cities), so I was eager to spend more time there. This is rare for me since I’m not usually a city person, more of a small town or country living person, but anyways – I digress.

Each day, I’d comb through emails (Trusted Housesitters, my house sitting platform of choice, sends out twice daily emails with new house sits). There’d be listings in Hamburg occasionally, but always only for a few days or with multiple dogs (I love dogs, but since I house sit alone, I prefer to watch cats as they’re easier and I don’t have to worry about them barking while I’m teaching English online).

So, I started searching for rooms for rent on WG-Gesucht, the biggest flat searching database in Germany. I found a few promising options, but nothing within my price range (Hamburg is notoriously expensive and difficult to find flats in).

I was really starting to lose hope and considering changing my plans, when, one night, I randomly decided to look up Hamburg on Trusted Housesitters.

And there it was – the Holy Grail of house sits. It had literally JUST been listed so it hadn’t even been sent out in an email yet. I still doubted I would get it, because it showed several people had already applied, but I went for it anyway and she responded almost right away – I got it!

It was pretty much perfect. Two cats (which I ended up falling in love with), right in the middle of Sternschanze (one of the coolest neighborhoods in Hamburg), on the top floor with big windows and a nice view, and the lady I was house sitting for (we’ll call her Joanna) was super cool. Plus she ended up asking me if I could stay another month partway through the sit, so I ended up staying in Hamburg for almost a full 3 months!

But ok ok – enough about that. But also proof that manifestation and thinking about EXACTLY what you want works? So maybe try it??

But anyways – so, here’s the tea. I was teaching English online, like I did almost every day, and I’d left a toy out for the cats: a red string attached to a plastic stick. One of the cats was hanging out in the room in front of me the whole time, but the other one, let’s call him Jack, wasn’t.

After class, I went to check on him and he was sitting next the toy. And the string was a few feet shorter.

Joanna was in a different timezone (we’d kind of swapped places, lol, as she was in Los Angeles) and it was super early morning her time. So, she wasn’t answering her phone.

I immediately called the Trusted Housesitters vet for advice (I love that they have a free vet hotline you can call for advice from anywhere in the world, 24/7). She advised me to err on the side of caution and take him to the vet, because it could get tangled around his intestines and then he’d need surgery.

Luckily I had this talk with Joanna before she left, so we’d set some ground rules.

I knew that if an emergency arose and I needed to take one of the cats to the vet that she would reimburse me if I couldn’t contact her.

I called the German vet that she’d given me the phone number for. I asked in German if the receptionist could speak English (I find this to be the respectful thing to do in every place I go) – she couldn’t, so she put me on hold. I just decided that I would order a taxi anyway, so while on hold I used an app to do so (there’s no Lyft or Uber in Germany).

While the taxi was on its way, I spoke to the vet and she told me to get there ASAP. They would give him something to make him puke, and hopefully, if it hadn’t made it too far down his digestive tract, the string would come out, too.

I grabbed Jack, put him in a cat carrier, and received a WhatsApp call from the lady I was house sitting for. She agreed that I should do whatever the vet said.

Unfortunately, it turned out that Jack hated going to the vet. He was the sweetest, most cuddly cat at home, but meowed loudly the entire 40 minutes in the taxi (I felt so bad for the taxi driver). And at the vet’s it was a total nightmare – it was like a scene from a movie. I was sitting in the waiting room with a few other people and their pets, and Jack was in the room with the vet.

I heard things crashing (and possibly breaking), Jack hissing and screeching, and the vet and her assistant yelling to each other in German. Everyone in the waiting room was looking around, smirking, like, “Who’s cat is that?” I tried to laugh along with them but then they brought him out to me, and it went silent real fast.

I’ll spare you the gory details but luckily, the string had come up…Along with his breakfast. All over his fur.

“We tried to clean him up, but he was a little…Difficult,” the vet told me. I didn’t blame her. It had sounded like a murder scene in there.

They also wanted to talk to the owner as it turned out they’d found another issue with his heart while checking him out. So I called her and she spoke with the vet over the phone. We made another appointment for me to take him back a month later.

I paid (you should definitely clear this with your host beforehand – some will have their credit card on file with a vet so you don’t have to pay, or they may leave you money. However we’d just worked it out that I’d pay and she’d reimburse me. I didn’t mind doing that because I could use my credit card and heyyyy, airline miles bb, but if you’re not comfortable with that, make it clear with your host.). Then ordered a taxi and got the heck out of there.

Jack was pretty woozy as they’d sedated him because he was just being that difficult. I did my best to clean him up (he was a mess to put it lightly).

Luckily, he was totally fine after resting for a while. I did have to take him back to have a heart ultrasound before I left, and luckily they said he was fine but to take him for a check up several months later.

As far as I know, he’s still doing well today, and hasn’t eaten any string since!

In Saltburn-by-the-Sea one of the cats had to be taken to the vet several times over the month that I was there. Since I didn’t have a car and taxis were expensive, the host organized for one of her friends to pick him up and take him. I just had to make sure he had his insurance papers, and put him in his cat carrier.

Also in Saltburn-by-the-Sea, one of the cats ate a little bit of my smoothie that had cacao powder in it. Since I know chocolate is poisonous to cats and dogs I immediately contacted the owner. She let me know that she had apparently eaten a chocolate cookie before, and that I should just watch her all day. She was totally fine.

In Stavanger, Norway, one of the dogs randomly puked so I messaged the owner. She told me that it was a normal occurrence and nothing to worry about. This is why it’s important to ask owners if there are any ‘quirks’ that their pets have – if I hadn’t received a quick response from her, I would have been worried!

In another house sit near London, the cat was making dry heaving noises and motions but nothing was coming up. I thought it might be a hairball, but regardless, I contacted the owner and sent her a video; she told me she thought it was just a hairball and not to worry. Regardless, I didn’t sleep well as she was doing it on and off throughout the night. The cat was totally fine the next morning.

The most important aspect of a successful house sitter is good COMMUNICATION. The second a pet does something odd or starts acting fishy, contact the owner. Even if you think it’s probably ok, in my mind, it’s always better to be safe than sorry.

Be sure you get the vet’s information before your house sit begins, and talk with the owner about the standard procedure in case an emergency arose. You may even want to get the phone number of a trusted friend or family member nearby, just in case something really bad were to happen and you couldn’t contact the host.

I hope this helps you handle any potential issues that may arise! 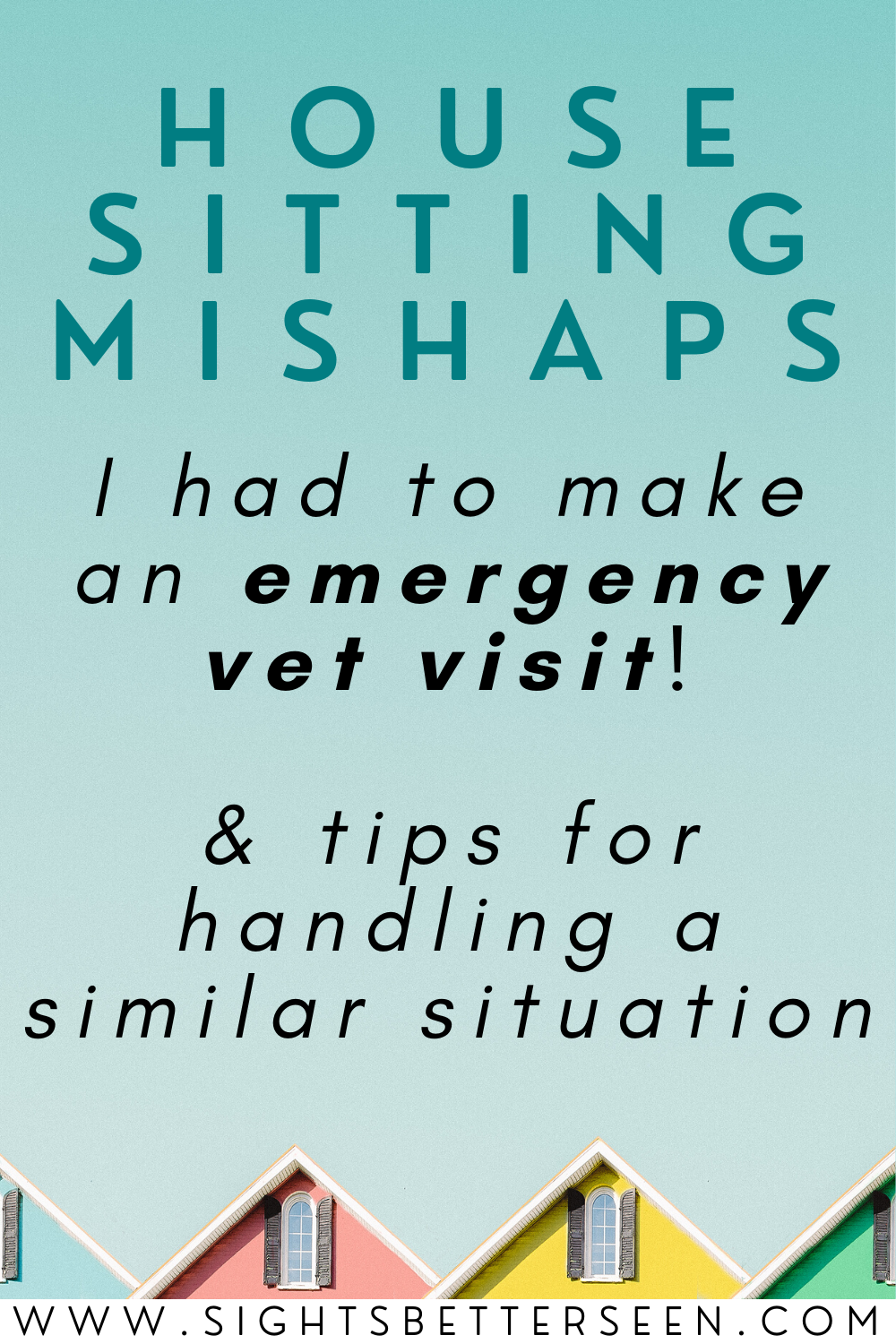 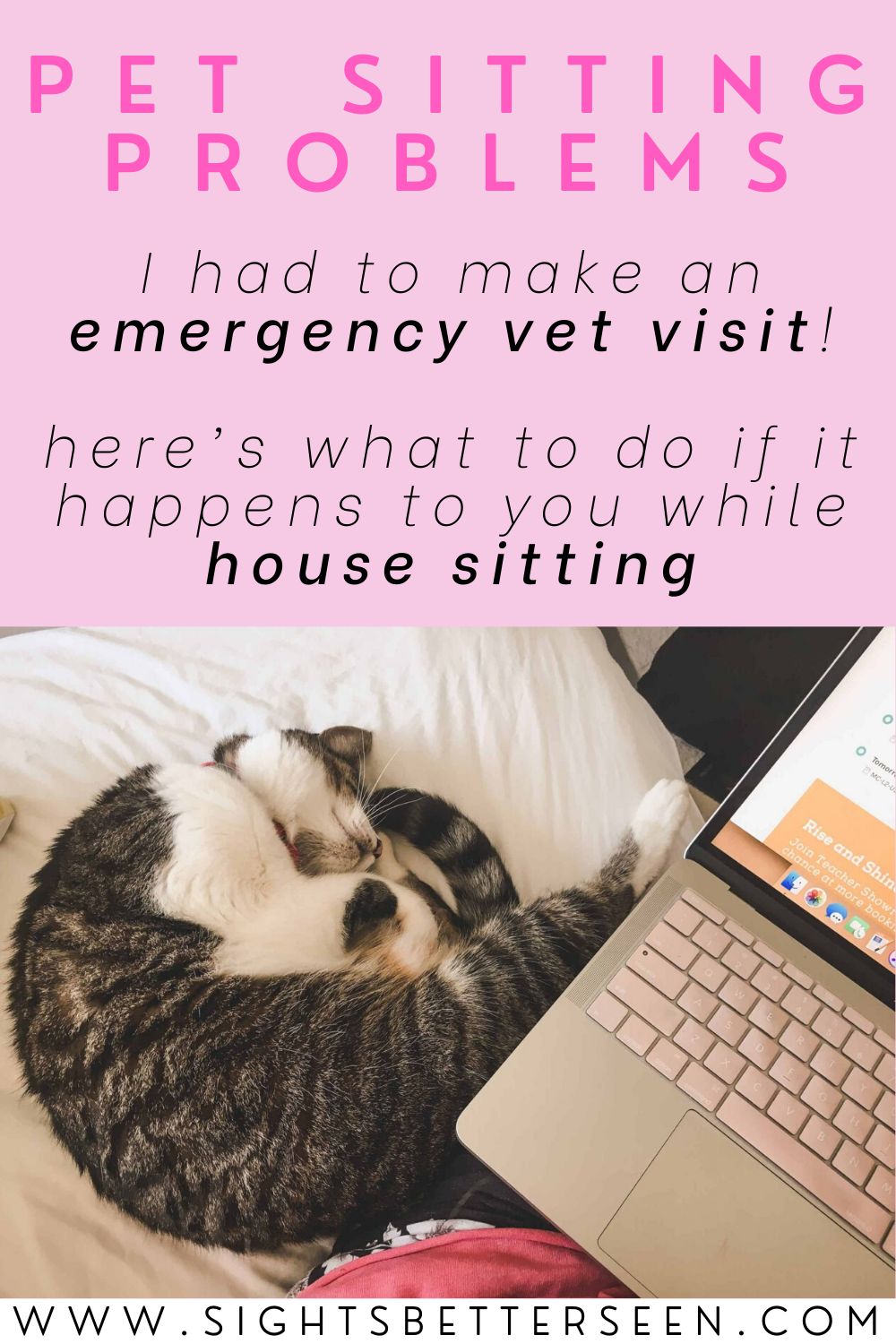