Tweet
Share
Pin254
Share
254 Shares
When I was in Ireland, I knew I wanted to to go to a couple of their national parks and explore all of the #natures that they have to offer. I ended up settling on cycling Killarney National Park and driving around Connemara National Park.

I actually ended up going to Connemara twice – first on a day trip with friends I met at a pub crawl, and second with people I met while hitchhiking with 2 girls I’d met at my hostel! Both of these stories make me sound way more adventurous than I actually am LOL. BUT it is pretty easy to meet people while traveling solo!

But I digress – this is about my solo bike ride through Killarney National Park, not Connemara.

Related reading: 19 Fun Things to do in Ireland

First things first: There is no entrance fee for Killarney National Park! In fact, all of the national parks in Ireland allow you to enter free of charge. In the words of Lenny Pepperbottom, How neat is that?

Pretty neat, especially since I was 23 and pretty darn broke.

Since I was pinching pennies, I stayed at Paddy’s Palace which, unfortunately, isn’t actually a palace but rather a really nice budget hostel! Rooms go from about $12 USD per night, so it’s pretty affordable. I had a great experience and even ended up befriending some people who were volunteering there in exchange for a free stay! They gave me awesome tips on what to see in Killarney. I honestly didn’t do much in Killarney itself, I mostly just walked around and took photos. I only stayed for 2 nights with one full day in the park – I could’ve easily stayed longer, but also felt like I saw all of what I wanted to see in just one day.

Because I was too broke to rent a car and walking wasn’t an option since Killarney is pretty big, I decided to rent a bike.

The morning I’d planned to explore the park started off…Well, not so great. It was raining and riding a bike in the rain is pretty much the worst. But it was Ireland, and even though I’d only been there for about a week at that point I’d already realized that the weather can change into four different seasons each day (even in summer – this was in June!). So, I took my chances and headed to the bike hire.

And I was lucky – the clouds parted pretty much right after I rolled into the park, and I had really nice weather the rest of the day. Well, except for when I was on the very top of Torc Mountain, but more on that later…

I was able to rent a bike for the full day for €12 because of my student ID! Normally, it’s €15. This is a reminder to always always always ask about discounts, because there were no advertisements saying they had lower prices for students – I just whipped out my trusty ID and asked if they had student pricing. So, you never know! I can’t remember where I rented my bike, but Killarney-Rent-A-Bike looks like they have the same price.

My first stop was Ross Castle. I HIGHLY highly recommend this place! First of all, CASTLES, and second of all, a tour of the interior was so cheap – only €3 for students and €5 for adults.

You can only go inside as part of a guided tour, but I thought it was very worth it. The tour was 45 minutes and I thoroughly enjoyed it. I’m not usually a huge fan of guided tours but this was awesome. There’s also an exhibit you can peruse inside while you wait as the tours are only first come, first serve and run every 15 minutes or so.

There are lots of stairs and small spaces so be prepared for that! I didn’t find climbing up too difficult, especially since we kept stopping to go into the different rooms, but just a heads up.

There’s a place to lock your bike outside the castle, too, so that wasn’t an issue.

After my visit at the castle, I biked the Ross Castle Loop on Ross Island. It’s a 3.5 mile trail and I found it pretty easy to bike, although there were a couple of uphill sections. There are a few viewpoints to stop at which make it quite nice, like Library Point and Governor’s Rock. I also did the Copper Mines Trail, but I was a little less impressed with that. My favorite view was definitely of Governor’s Rock.

I stopped at Muckross Abbey and wandered about for a bit. It’s pretty cool to see the ruins and old graves – it was built in 1448!!! It’s free to enter and very peaceful.

Torc Waterfall was quite beautiful, but not one of my favorites if I’m being honest. It was also a little crowded since it’s such a popular spot and doesn’t require a long hike to get to, just a very short walk.

I also started to walk some of the trails nearby, but didn’t go too far before turning around.

Ok, ok, ok – I know Muckross House is one of THE things to do in Killarney National Park, but I…Skipped it. As mentioned above I was on that budget life and didn’t really want to spend €7.75 for a ticket (€9 for adults; lol I was being incredibly cheap…). I’ve also just seen lots of period houses before – I felt like I was in Killarney to see nature so that’s what I really wanted to do. So, I did, however, walk a bit of the Muckross Lake Loop!

I hadn’t researched anything else as I’d anticipated everything taking longer than it actually had. Since it was summer in Ireland, I had a lot of daylight left (it didn’t get dark until 9/10PM!) and wanted to make the most of my time there. So, I asked one of the workers at the information booth what her favorite thing in the park was – and she said hiking Torc Mountain.

I am so so glad I asked, because I hadn’t stumbled upon Torc Mountain during my (very brief) research and it ended up being my favorite thing in Killarney NP!

I didn’t have phone data and the trails were a little confusing to follow so I almost immediately got lost LOL. I wasn’t really concerned though, as I knew I could find my way back out, and there were plenty of people on the trails.

I ended up doing what I always do – asking people walking their dogs where to go, as I figured they must be locals and *hopefully* knew the park well. I had to ask several different people to make sure I was still going in the right direction and the last woman I asked even walked part way with me! She said she would have done the whole hike as she’d done it before, but she had to get to an event that night. Did I mention Irish people are seriously the nicest??

The first part of the trail is completely in a wooded area, with tall trees on both sides. Once you get out of the wooded area and closer to the mountain, it feels like you’re transported to a different world. Like I actually felt like I was in Middle Earth in Lord of the Rings. I wouldn’t have been surprised if a fairy or elf popped out from behind a hill.

And since I’d started the hike so late in the day (it was now about 6 or 7PM) the trail was empty! I only came across two groups of people making their way down the mountain. It was both awesome and a little eerie, especially since I didn’t have data as I’d mentioned before, and no one knew where I was. LOL but also not really. I don’t recommend doing this – just pay for the damn SIM card, they’re really never that expensive. Only surviving off of wifi for 1.5 months while I traveled alone was seriously one of the dumbest things I’ve done.

BUT anyways, back to the hike! It’s rated as difficult and is marked at about 4.4 miles round trip. I didn’t think it was too bad, although the wooden steps at the end pretty much go straight up the mountain. I stopped a lot to ‘take photos’ and ‘enjoy the landscape views’; not to catch my breath or anything 😉

I reached the top around 7 or 8PM and was only able to enjoy the views for a few minutes before it suddenly started to rain and then POUR. Luckily I had my trusty rain jacket with me (as always in Ireland) but it freaked me out a little since I’m from California and not used to ~WeAtHeR~. I panicked that there might be a thunderstorm, and again – no one knew where I was – so I literally ran back down the mountain.

But of course, in 10 minutes it was bright and sunny again and I wished I’d stayed up to admire the view! I should’ve known better, but my fears got the best of me. I hope you enjoy cycling Killarney National Park as much as I did! Overall, my favorite activities were Torc Mountain and the Ross Castle tour. If you only have a short amount of time, those two are what I’d recommend doing. 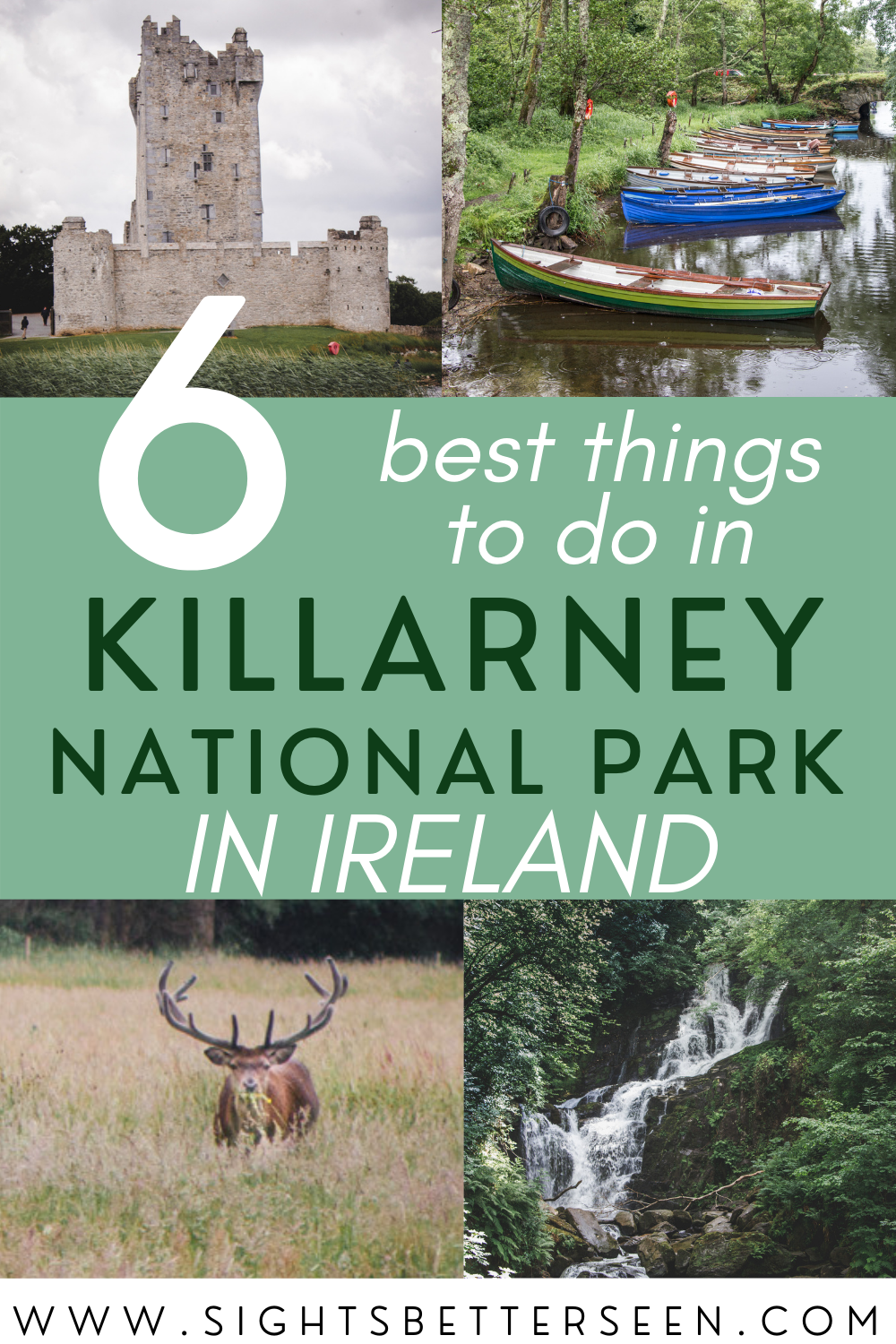 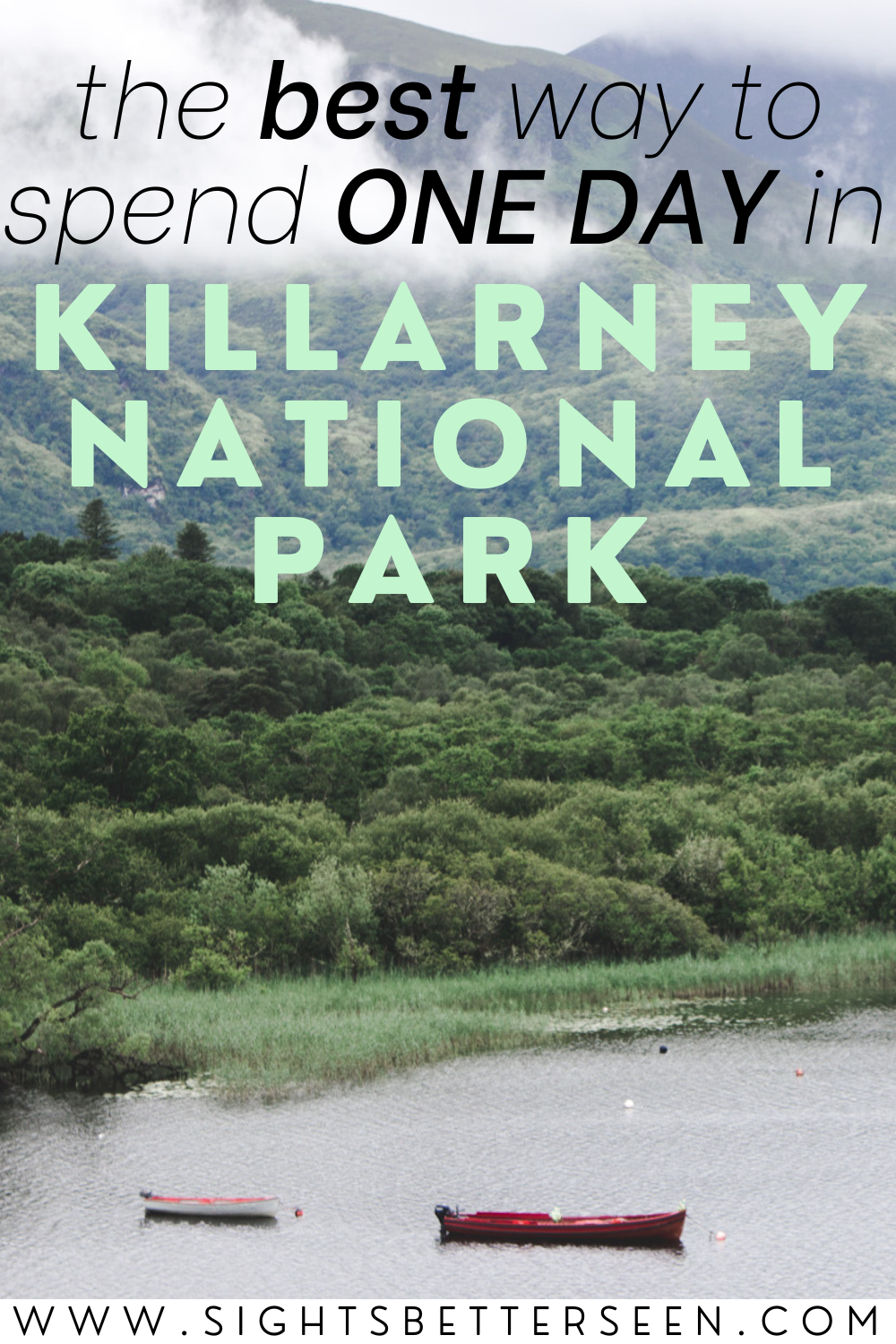