Tweet
Share
Pin51
Share13
64 Shares
Being from California, I was pretty nervous to plan a trip to a notably colder destination like Copenhagen. And in JANUARY nonetheless! And then to call it a VACATION?!

But, I lived to tell the tale.

And to my somewhat surprise I ABSOLUTELY LOVED IT.

Psssst…Are you from California like me and clueless what to pack for winter travel? Check out my packing list for Europe in winter!

I might just be one of those people that likes winter, but I’d go again in a heartbeat. It was so nice being all cozy and going from cold air to warm buildings. And all the restaurants with outside seating had blankets along with the chairs!

It did get darker earlier, but I don’t think it really got DARK DARK until about 3 or 4 (we went in the latter half of January, though). It really wasn’t a big deal for either of us – we just got out during the day, and by the time it was dark, we were having dinner anyway! So it wasn’t all that much different from winter in the states, to be honest. It was very relaxing.

My only complaint was the mirrors. Everyone is tall AF in Copenhagen (and all Scandanavian places, really) and my short ass was always too small to reach the mirrors lol – I often had to stand on my tip toes. And since one of my favorite past times is looking at myself, that was definitely an issue…

Everyone was soooo stylish, their babies were adorable (all dressed in snowsuits and bonnets), it’s super walkable (we walked from our AirBnb in Vesterbro to all the places recommended below), the food is organic and bomb, they have an awesome variety of veggie and vegan options, the buildings are bright and beautiful, and it’s basically perfection wrapped up in a city.

So, here’s what I think you should do in Copenhagen in January:

THE ROUND TOWER HAS PERFECT VIEWS

This is a legit place to see some legit views. It does cost about $4 USD (or 25 DKK, or free with the Copenhagen card, which tbh we didn’t really look into since most of what we were doing was free), but it’s worth it! There are some cool little booths you can go into that have information about the tower, and what some of the rooms in there were used for. There’s even a little museum of art! It’s also right near Strøget, a major shopping street.

STRØGET – GET READY TO DROP ALL YOUR MONEY

One of the major shopping streets in Copenhagen. I think this is one of the most well known, and super touristy.

But also where the Round Tower is, so might as well walk through it if you go there. There’s a really cool bookstore right across from the tower, and it was busy with performing street artists and the like.

NYHAVN IS AN ACTUAL FAIRYTALE 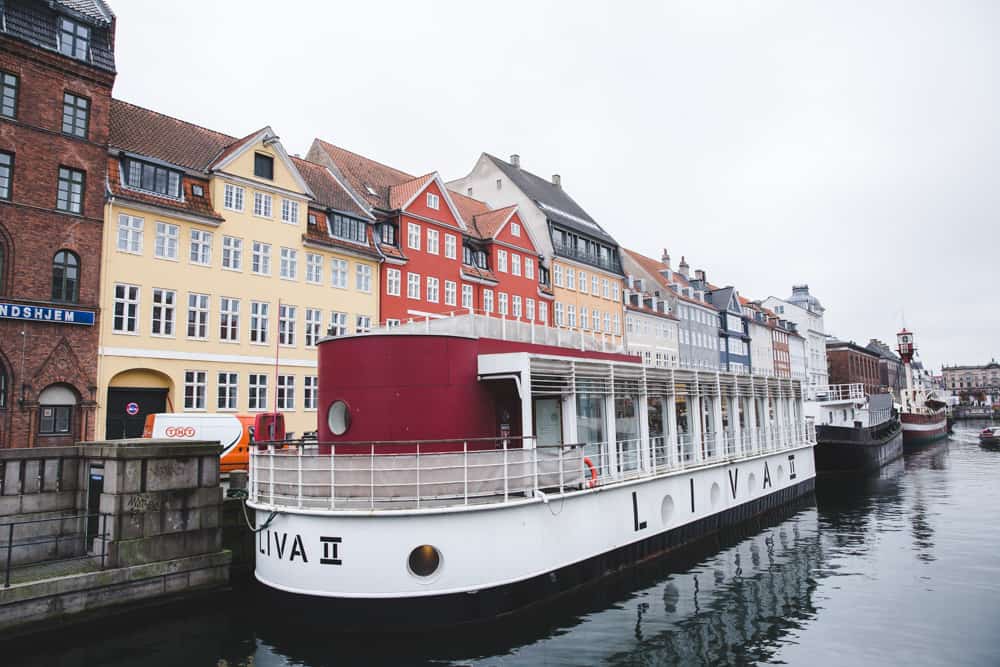 This is that classic place that you picture of when you think of Copenhagen – the colorful buildings lined up on the water. It is pretty touristy, but it’s so beautiful that I don’t even care.

Such an interesting place! Basically, it’s this little area that anything goes – they sell weed and you can smoke there.

The government tried to shut it down, but the civilians were like nooooope. And so, it still exists, as long as everything stays there and doesn’t spread to the surrounding city.

There are some things to keep in mind, though: be respectful – a lot of places don’t want their photo taken. I get it – it’s become a huge tourist attraction, but for some people, that’s where they live and don’t want their personal lives broadcasted. And also, they really don’t allow photos AT ALL where the weed is being sold lol.

It’s also recommended that you leave before dark. It was really interesting, though, and my friend and I (also a female) visited during the day and felt totally safe.

This is one of the coolest markets in Copenhagen. Also one of the hardest to remember how to spell. Although I don’t have much to compare it to because it was the only one I went to LOL. But I think it’s one of the biggest, and a classic stop on your trip. Go hungry, because you’ll fill up fast on all the yummy foods.

THE FOOD IS DELICIOUS

If you go to Copenhagen on the weekend, make sure you grab some brunch! It’s a litttttle pricey (I think about $20 USD a plate), but it’s so fun!

I got brunch twice and kinda regret the hole in my wallet but it was soooo good. They give you a variety of food and that’s what makes it so fun! My favorite brunch was at Neighbourhood (or NBH for short; normally, they do pizza), pictured above.

We also really liked 42Raw (a vegan place; I had the brunch, but really really loved my friends’ acai bowl and wished I’d gotten that instead), anything at WestMarket (where our AirBnb was! They also have pop up thrift shops on Sundays)…And to be honest I think those are all the places we tried LOL.

We got lazy a lot and went to WestMarket. I can tell you though that I had the best veggie pita Souvlaki there, and such good juices! But let’s be real, there are good juices everywhere. If you’re a health nut Copenhagen is literally perfect. We also had so many mozzarella/pesto/tomato sandwiches, those were so popular both there and in Sweden haha.

I honestly don’t think we had a bad meal in Scandanavia. Everything we ate was GOOD.

[…Awkward, I don’t have any presentable pictures at bars…I wonder why? LOL] I tossed off my grandma façade and actually went out ALL 3 NIGHTS we were in Copenhagen.

WHO AM I???? Although, to be fair, the first night we went to Duck and Cover which was a very chill speakeasy and just got one drink each. They were expensive AF but damn, they really know how to make a cocktail – probably one of the best I’ve ever had. I got the lime thing and my friend got a drink with fig in it. GET THE FIG DRINK IF THEY HAVE IT!!! It was literally the best thing I’ve ever had. I have no idea what it was called, even after scouring the internet for hours.

Next night we went to Lidkoeb – they asked us if we were at least 24 before entering? Not sure if that’s standard, but we did notice that it seemed to be a bit of an older crowd! The drinks were pretty good though, and we chatted with the bartender who was nice.

Our last night we went to Brass Monkey, a super fun tiki bar! Get The Zombie because they light it on fire (although don’t get your hair in it, like one girl did! We felt so bad for her and it smelled like burnt hair the rest of the night lol), and their other drinks were pretty good, too. They also had limbo when we were there (not sure if they do it every night?), which was very very entertaining to watch!

WHAT WE MISSED (SAD FACE)

We were also only there for 2 full days and kindaaa got late starts, since we’d gone out the previous nights haha. Next time, I definitely want to add these places to the list!

It pretty much stayed in the 40’s Fahrenheit (about 4.5 Celsius) the entire time we were there. For some reason I was picturing like, sub-zero temperatures and walking uphill both ways to get to our accommodation with the snow just slicing through the skin on our faces????

LOL sorry if that was too graphic, but that’s really what was going on in my California brain!

It also only rained a little bit – not sure if we just got lucky, but it stayed pretty dry. I don’t even remember being cold walking to bars at night (and trust me, I am not one of those people that stays warm from drinking).

We didn’t even have to take out cash because they accept card EVERYWHERE. Some places ONLY accept card, and won’t take cash!

But, don’t hate me if you stumble upon a cash-only place.

And I think we all already know this, but Copenhagen is not a CHEAP place. Did it make us broke? No, not really. But did our bank accounts dwindle? Yep, they sure did. But it’s such a cool city that it’s worth it – I’m not usually a big city lover but I LOVED Copenhagen.

We got lucky and our AirBnb was in a pretty good location so we just walked everywhere. Copenhagen is a pretty small city tho and totally walkable IMO.

But, if you do want to use public transportation, here’s more info about it.

Looking for more winter getaways? I braved the cold in Stockholm, Abisko (the Arctic!!!), and Switzerland, too!

WANT TO SAVE IT FOR LATER? PIN IT! 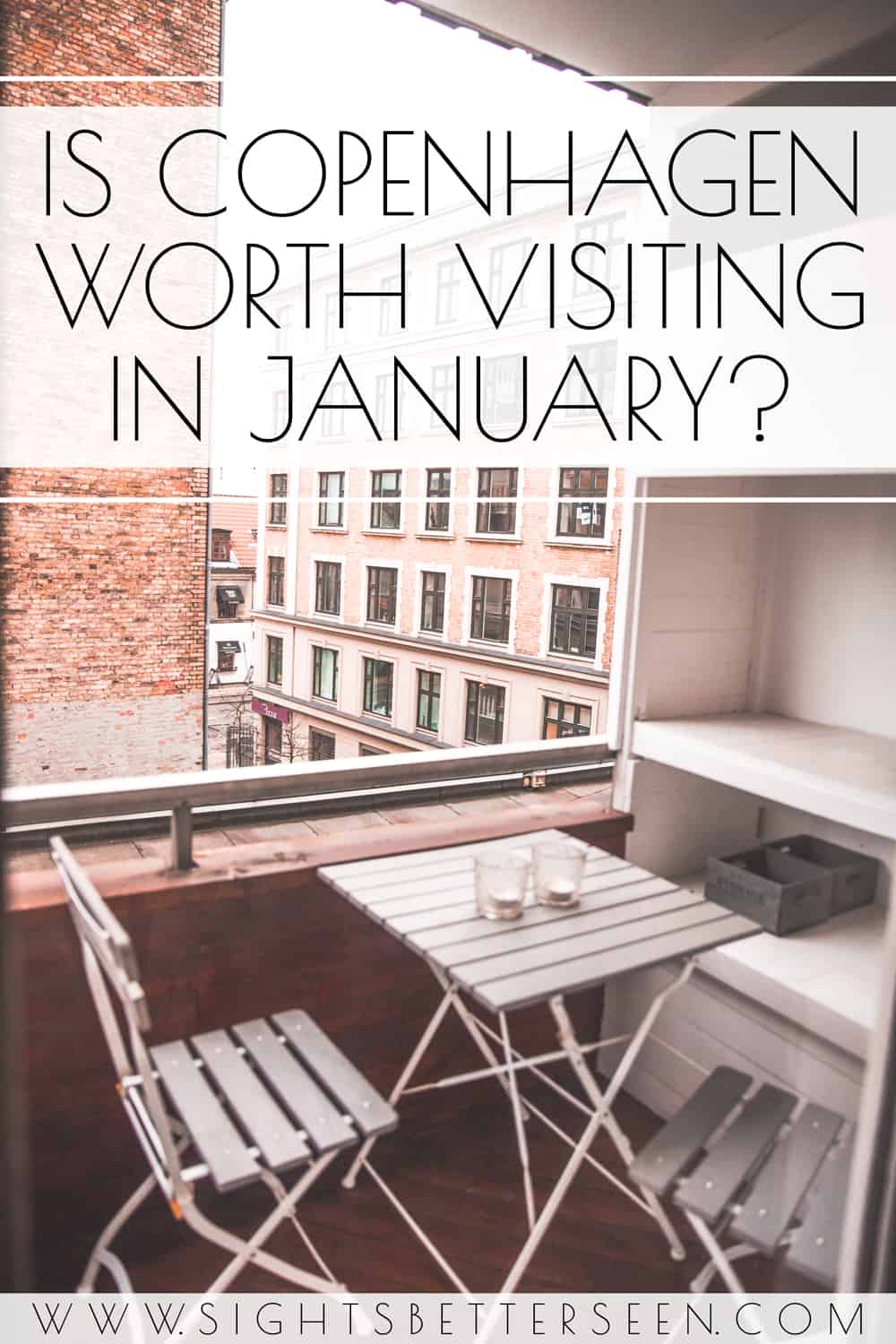 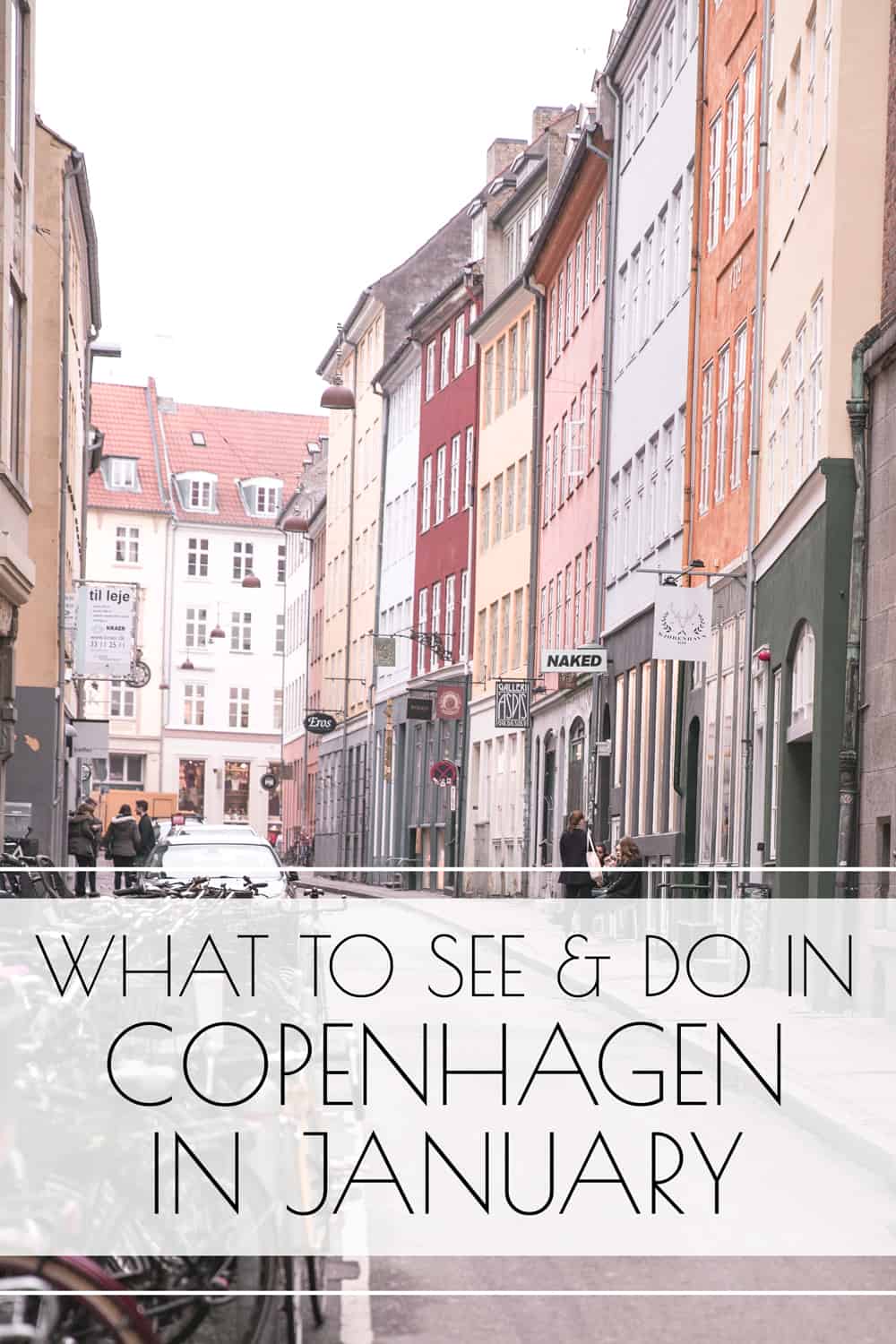 2 thoughts on “Copenhagen – But is it Still Lit in January??”