Tweet
Share
Pin106
Share
106 Shares
I wanted to go to Apple Hill near Placerville, CA the very second I found out about it. I love hills. And apples. So clearly it was made for me. There are so many things to do in Apple Hill in the fall – it definitely checks off multiple categories in my fall bucketlist! But let me tell you – it’s much more than that. Although there are many apples and hills involved. And apples in so many forms – (hard) cider, beer, strudel, pie, freshly picked. It goes on and on (and I’m not complaining).

We couldn’t actually do any apple picking the first time we were there (all the apples are gone by the end of September, news to me), although we did go rogue and pick some off the ground on the side of the road. There were a ton of them and they looked like they were going bad! So I was doing them a favor! Otherwise they’d attract deer and other unwanted pests and the like…

The second time, however – I made SURE we would get to pick them apples. All of them. And you bet we did.

Read on for what you need to know about Apple Hill in fall 2020, and my favorite Apple Hill itinerary! Click here for a 2020 map.

IS APPLE HILL OPEN DURING CORONAVIRUS IN 2020?

Yes, it is! However, not all farms are open, and some are only taking people by reservations. Therefore, you’ll need to double check with the specific farm you want to visit to see if there’s anything you need to know before your visit.

Apple hill does require you to wear a mask, so be sure to bring one. You can find more information on their policies here.

WHEN IS THE BEST TIME TO GO TO APPLE HILL?

Apple Hill’s fall season runs from early September to December. Some establishments are open year round, so be sure to check the particular place you want to visit on the Apple Hill website for exact dates and times. Some farms even offer berry picking in the summer!

Here are my tips if you want less crowds (as you can imagine, it’s a pretty popular place and gets busy on weekends):

I’ve been to Apple Hill twice, once in November and once in September. I liked visiting in November better because September is still so HOT in Placerville! Plus we got to see some fall colors in November. It won’t cool down until mid-October or later.

Unfortunately, all the U-Pick apples will be gone by the end of September, so if you want to do that just be aware it will still be hot. So, August/September = HOT but you can still pick apples; October/November = cooler, fall colors, but no apple picking.

I’ll go over places to go apple picking below. Apple picking is quite popular so apples go QUICK, and not all of the farms offer it. Just be sure to call the farm you want to go to beforehand to find out which apples are in season and if there are even any left.

WHAT TIME DOES APPLE HILL OPEN?

It depends on the farm, but in general, most farms are open from 9AM-5PM. Some are only open on weekends, while others are open 7 days a week. Double check with the specific farm(s) you want to visit, as the hours can vary.

If you’re looking to avoid the crowds, I found that most of the crowds were gone by 2PM on weekends. On weekdays, you can pretty much go anytime and expect less people. Just be aware that you may hit traffic getting to and from Apple Hill during commute times Monday-Friday (around 8-9AM or 4-5PM).

THE BEST THINGS TO DO IN APPLE HILL IN FALL

This list is curated to drive the opposite way of traffic. Click here for an Apple Hill 2020 map.

Denver Dan’s Apple Patch rocks! It’s open 7 days a week, and has a TON of different apple varieties to pick. Here’s what I recommend doing:

Other farms that offer apple picking:

Here’s what I recommend doing:

Even though Jack Russel Farm Brewery is named after a dog breed, they don’t allow dogs. LOL. Go figure.

We did the beer sampler, and tbh their beers weren’t that great. BUT they have pumpkin beer which is fun (although they were out when we were there!), and the apple beer was cool.

There’s also a “cave” winery (pictured above) attached to the brewery which was super cool. However, the wine was pretty terrible if ima be real wit chu, and the cave looks a lot cooler in the photo.

I don’t really recommend this place unless you really want to go to a brewery. Otherwise, skip it. 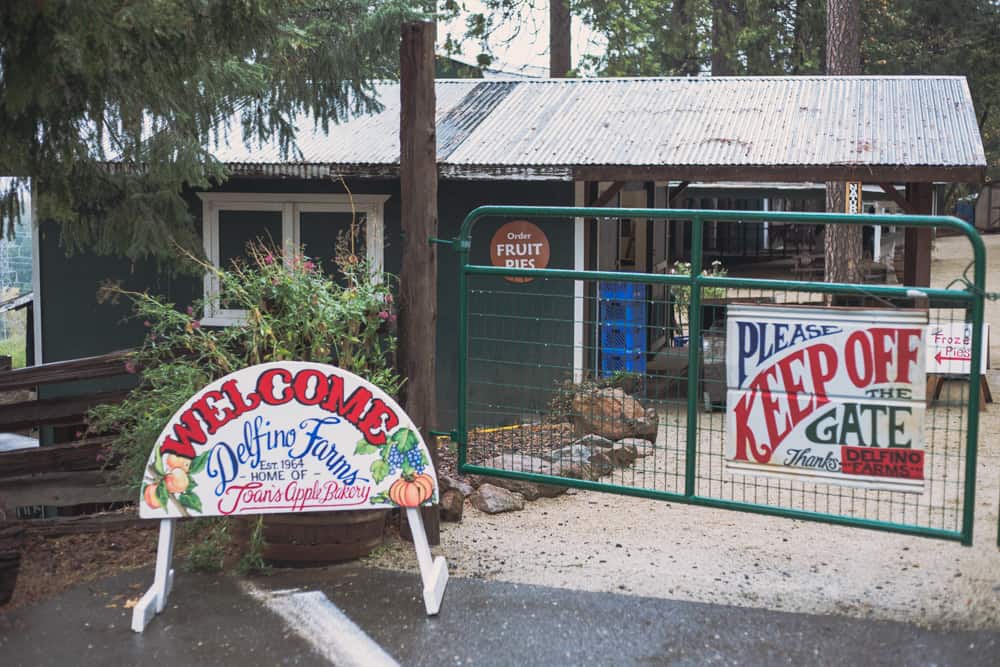 Delfino Farms was by far the prettiest location we went to. Here’s what you should do there:

Boa Vista is a really large farmer’s market type set up. They have lots of veggies/fruits and specialty items, like pickles in vinegar and old fashioned apple slicers.

I’d say only stop here if you have specific items in mind you’d like to buy, otherwise I preferred the smaller shops.

There’s also wine and beer tasting, but I’m not sure how good it is. My friend and I were going to try it, but my dad is a wine snob and insisted we go to a real winery instead.

Make sure you go to High Hill Ranch and NOT High Hill Farm – they’re different places! This place is HUGE. Lots of vendors selling things (that you probably don’t need, if I’m being honest, lots of little decorations and kitschy items etc.) and lots of food/desserts to buy. I wasn’t the biggest fan and would probably skip this if pressed for time.

We mainly went to Madroña Vineyards because it was close to High Hill. And it was free! We did quite a lot of tastings for it being free – I was impressed. However, the wine was not our favorite, although the location is really pretty! 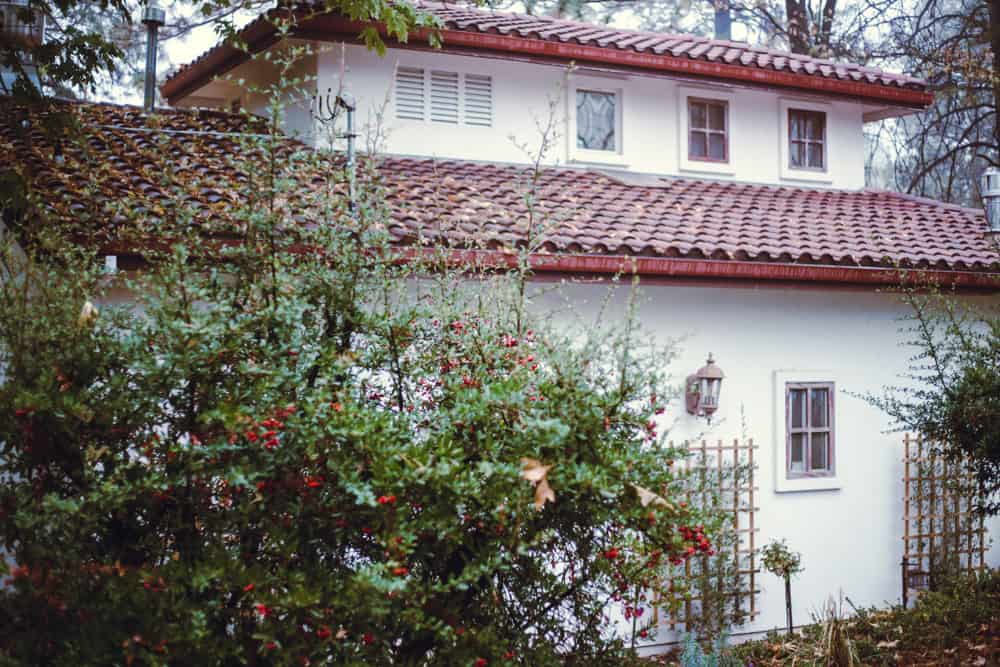 We liked the wine better at Jodar Winery, and the tastings were also free! And the location was also really pretty, too. To be honest I haven’t really ever visited an ugly winery, so…. 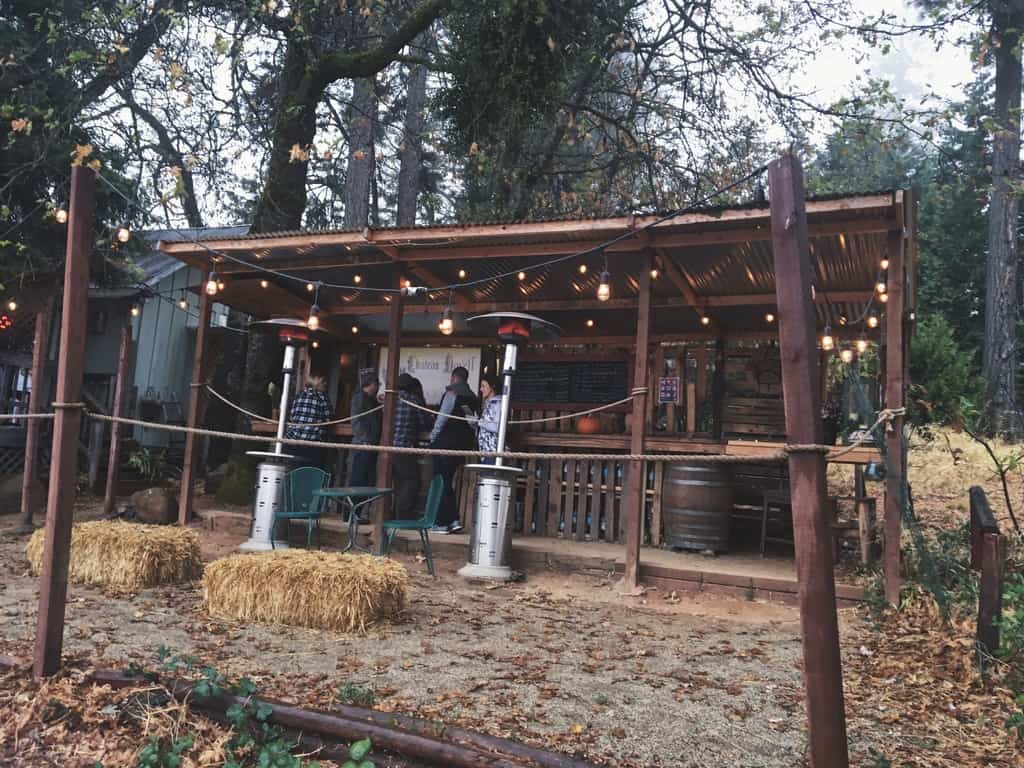 You should 10000000% go here – we loved Chateau Davell! It’s outdoors, but they have heat lamps when it’s cold. Plus you’re drinking wine so is it ever really cold?

And the stand is ADORABLE (see above). This wine tasting costs money ($5) but they give you food samples to try with your wine! Each wine is paired with a little bit of cheese, crackers, or chocolate.

And the wine is goooood. But that also could have been due to the fact that this was the third winery we visited…

However, they have apparently moved locations since the last time I went! I’m not sure if it’s still as cute, but the photos they have up on Facebook still look really nice.

The whole Apple Hill area is just so damn cute and pretty. Driving on the roads (especially during fall with the pretty colors, eeeeek) is basically a destination in itself! In summary, my favorite stops were:

If you really want to shop, go to High Hill Ranch and Boa Vista. They’re both huge markets with lots of items to choose from! However, they weren’t really my scene as they were both giant and more crowded.

You should definitely go to Apple Hill at least once for the experience. Have fun and tell me your favorite stops in the comments!
Tweet
Share
Pin106
Share
106 Shares
My Natural (Zero Waste Inspired) Beauty Routine: The Best Natural Products to Buy & How I Make My Own
10 of My Biggest Travel Mistakes: What NOT to Do When Traveling