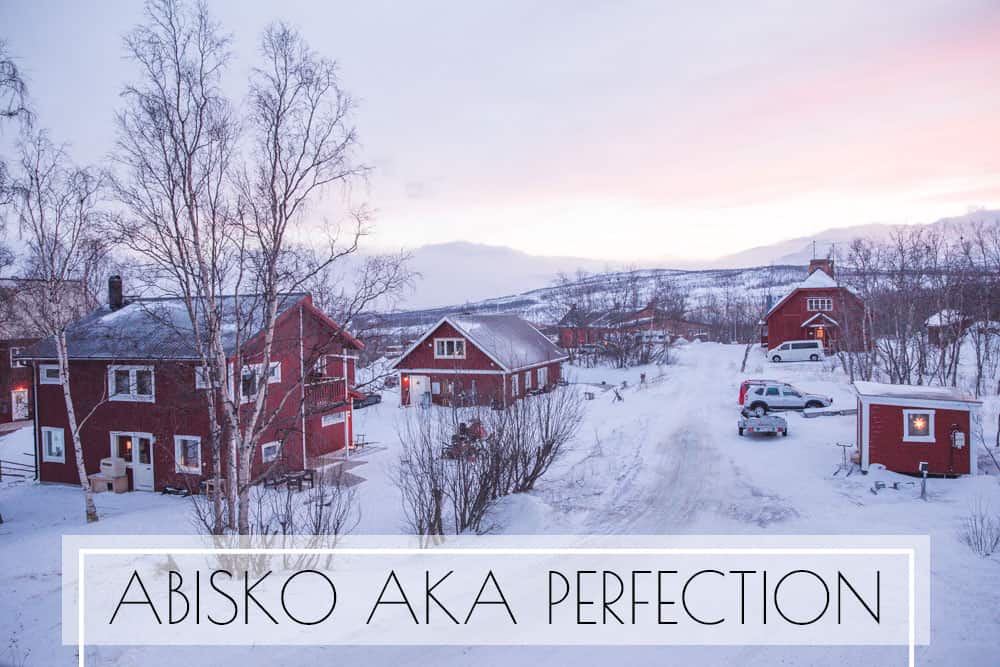 Okay, so – WHY exactly would I want to go to Sweden in the dead of winter (with minimal daylight) and call it a “vacation”?

Well, the main reason: stupid stupid cheap tickets. Like $440 round trip cheap from San Francisco to Stockholm. Not too bad, eh?

So, we went to Abisko at the end of January, and I was real worried that the lack of light would leave us bored to tears (when I looked online, it said it would only be light out from like 10AM-1PM), but I thought it was fine! It actually ended up being light outside from 9AM-2PMish. Plus we just had so much fun hanging out in our hostel, and met so many cool people!

It’s also not that bad walking around in the dark though, as long as you have a head lamp. However, if you still want to see the northern lights but want longer days, go during February!

I was also dying to see the northern lights. I’ve been obsessed with them ever since I saw Balto (anyone??).

So, northern Sweden was definitely on my radar – specifically, Abisko, since it has some weird ‘blue hole’ in which the cloud cover seems to dissipate no matter the weather around it.

And for some reason I’ve always been fascinated by the Arctic (I mean I’m like 1% Norwegian according to my grandma so like, NBD) even though I’m a total baby when it comes to the cold. But I was willing to be brave to experience a TRUE WINTER since I’m from Northern California and anything below 50 degrees F is terrifying.

And brave I was, since there was a storm our first night there and we thought it would be a GREAT IDEA to go look for the lights in the middle of a frozen lake.

Spoiler alert: we did not see the lights. But I did about half freeze to death – luckily Hostel Haverskog (and Hostel Winterday!) is a short walk from a sauna that we were able to use afterwards to defrost 🙂

But anyways – Abisko was my favorite, I think, of our whole Scandinavia trip.

The supermarket that pretty much only sells meat and candy.

The relaxed and very chill vibes.

The freezing cold that made me want to find a dog named Toto and let him know that we definitely weren’t in California any longer.

I loved all of it, and wished we had at least a couple more days there (we stayed for 3 nights and 4 days – for those of you who are more city people, you may be a little bored, but I absolutely loveddd the scenery!).

Would I want to live there? Ummmm probably not although it is super beautiful (and also in the summer! I’m dying to do Kungsledden, or King’s Trail – it takes about a month and the pictures of the scenery look gorgeous!).

I couldn’t hang with all the snow and lack of fresh fruits and vegetables. But ahhh there is something sooo magical about it.

So, here are the best things to do in Abisko, Sweden in the middle of winter.

There was like a verrrry faint green cloud and people lost their shit. Apparently they do dance, though (although I have yet to believe anything I’ve heard – guilty until proven innocent).

We did a tour through our hostel – it was roughly $100/per person, and probably not so worth it if you’re on a budget (you can just run out to the back of the hostel or the frozen lake and see them; Lights Over Lapland has an Aurora Webcam that they post photos from online so you know when to run outside), although the tours do take you to a much darker area.

We hung out in what I THINK was supposed to be a Lavvu (structures that the native Sami people used to protect them during harsh northern weather) with a fire in it for a few hours, and drank lingonberry tea (really juice) and had a cardamom bun snack thing. Our guide was pretty knowledgable and fun to talk to, as well!

However, I wish we had been given some history behind Lavvus and The Sami people. To be fair, I didn’t ask, either. Looking back I really wish I had!

ALL YOU CAN EAT BUFFET AT TURISTATION

The lunch buffet at Turistation was only about $12 USD/person and the food was traditional Swedish style and pretty bomb, actually. I’d highly highly recommend it!

They also have lots of options for vegetarians/vegans (I had this fake meat called Oumph! which was super tasty, plus they have lots of yummy sides). The Turistation is also super cozy, and has a great view of the frozen lake and surrounding areas.

It takes about 30 min to walk to from the Hostel Haverskog/Winterday, although it took us much longer because we went the wrong way twice and had to keep asking people lolol.

FROZEN WATERFALLS ARE JUST AS COOL AS THEY SOUND

The ice waterfalls were soooo cool.

And you can totally go ice climbing on them! We didn’t, but they were super cool to look at. And fun to watch the people that actually were ice climbing.

WALK ON THE FROZEN LAKE

Check with someone working at your place of accommodation before you go just to be sure it’s walkable (I don’t want to be blamed if the ice is unusually thin that year or something).

It was super cool! Especially because I’d never been on a frozen lake before.

Apparently it’s like 4 inches thick and a car can drive over it, so we knew we were chill (although I was still slightly terrified). There’s a really cool trail you can do that was recommended by one of the hostel workers, but we didn’t get a chance to do it because of the crazy wind from the storm.

WALK TO THE STORNABBEN VIEWPOINT

The Stornabben Viewpoint was really close to our hostel, and soooo beautiful and serene and amazing.

It didn’t take that long to hike it round trip either – maybe like an hour.

The signage isn’t that great, so just repeatedly ask someone working at your accommodation how to get there in great detail, like I did. They even gave me a map and marked it with a star. They loved me 🙂

I also like only kind of knew where I was going most of the time, but you pretty much just walk straight up the hill behind Hostel Haverskog until you reach a brown cardboard arrow pointing left. Follow it, and you’ll make it to the top!

Eeeeek if you’ve never been to Norway before, hurry over to Narvik! Narvik is about a 2 hour train ride from Abisko.

If you’re just doing a day trip you’ll only be able to stay there for like 3 hours due to the train times, but it was soooo worth it!

The train ride alone is absolutely beautiful, and you can see fjords right out the window.

Once we got into Narvik, we didn’t exactly have a plan so I asked a lady walking her dog where we could get the best view of the city (side note: always ask people with dogs! They’re usually nice, most likely local, and will probably know good spots since they’re always walking around), and she suggested the Totta Bar at the Scandic Hotel. I WOULD HIGHLY RECOMMEND THIS!

We went up to their top level (just ask the front desk if you’re not sure) and had lunch. THE VIEWS WERE SOOOO LOVELY. I’d highly highly recommend it. But – know that there is crazy weather in Abisko sometimes, so the trains do get cancelled.

WATCH THE SUNRISE AND SUNSET

I don’t know why, but the sunrises and sunsets in Abisko are soooo pretty. At least when we were there – I don’t know if we just got lucky, but they were seriously gorgeous.

CHOOSE FROM AN ARRAY OF TOURS

There are SO MANY tours you can do. Check with your accommodation, but they pretty much all offer the same ones.

Tours include ice climbing, snowshoeing, cross country skiing, hiking, dog sledding, seeing the Northern Lights, and a tour to learn about the Sami way of life.

And to those people who were wondering why the hell I wanted to do this trip – why I’d want to go to northern Sweden in the dead of winter and half freeze to death – do you now see why it was so worth it?

HOW TO GET TO ABISKO

From Stockholm, you can either take an overnight train (17 hours!) or a plane. We flew, because it was actually cheaper than the train, and only takes about 1.5 hours.

The train goes straight into Abisko, but the plane flies into Kiruna, and then you can take a train or a shuttle to Abisko. Or hitchhike like one guy we met did!

However, the trains sometimes get cancelled due to bad weather (that happened when we arrived in Abisko; we were going to take the train back BUT our flight left before the train did).

So, we ended up taking the shuttle each way. It’s a little expensive – about $50 USD – but very comfy and takes about an hour. And, like I said, the way there was worth it since we got to see Reindeer! However, that was only because the guy driving our shuttle had to tend to them before the storm. So you may not get so lucky.

I stayed in Hostel Haverskog, but you can also stay in Hostel Winterday, which is a little cheaper (they are owned by the same company and basically right next to each other).

They have private rooms and rooms for multiple people. Winterday has a sauna that you can use from 9PM-10PM, even if you’re staying in Haverskog – it’s amazing after you’re freezing to death from looking for the northern lights!

You can also stay at the Turistation or the Mountain Lodge, both of which are more expensive.

OTHER THINGS TO NOTE

There’s one supermarket in Abisko, a lot of which is meat and candy. LOL. They have other things, too – it was easy for me, as a vegetarian, but my friend, a vegan, had a bit of a difficult time and ended up eating dairy while we were there.

The supermarket also doesn’t sell hard alcohol, just beer. There aren’t any bars/clubs in Abisko, either. Just FYI if you’re tryina get your party on.

Also, the trains/transportation in general can be cancelled due to weather, so keep that in mind, and feel free to ask the person working at your accommodation what the status is.

The only restaurant (that I know of) was the one at the Turistation (which was actually really good!), and a little food truck that was located right outside the supermarket (I never tried it though – not much for vegetarians).

You’ll probably do a bit of walking, so be prepared for that! Or, you can rent a snowmobile. Have fun! Abisko is an amazing place, and I miss it so much!