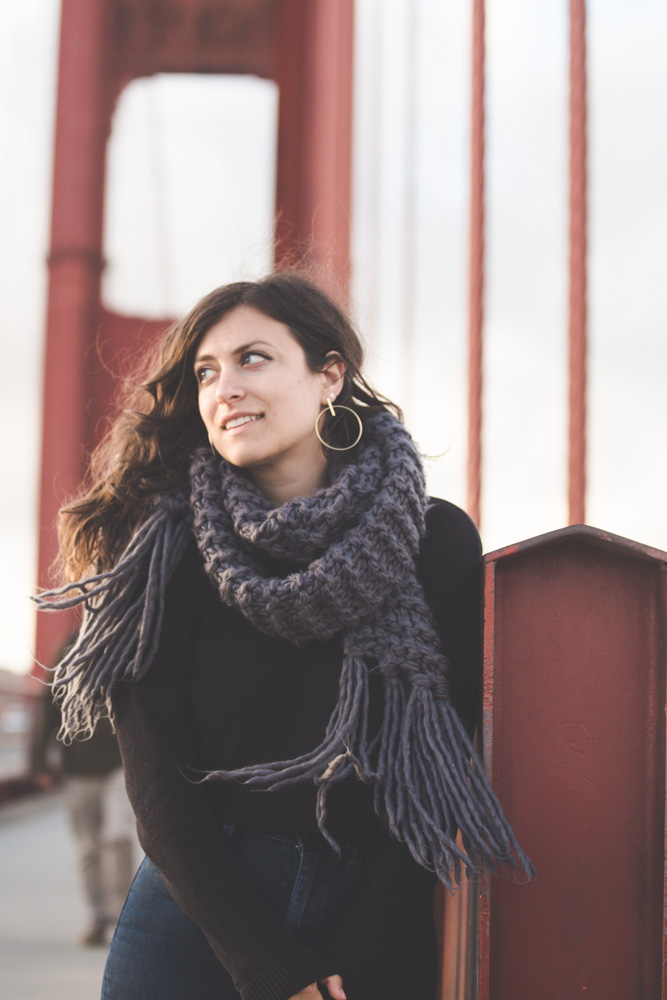 Ok, so just a precursor – this is probably going to be the most ‘first world problems’ post EVER. But I felt like writing it anyway.

I know that I eventually want to settle down and have somewhat of a ‘home base’.

But right now, I’m still traveling my little heart out. But while I love being a ‘digital nomad’, there are definitely some things I’m missing from my stationary life. Here’s what I miss the most:

MY BLENDER AND JUICER

Ok, this might be kinda lame but this is probably the #1 thing I miss LOL. At home, I had a Vitamix blender and an Omega juicer (FYI I bought both refurbished for a cheaper price, but linked the new ones here for those of you that would rather do that! However, I recommend buying refurbished/used when you can.) I used to make a smoothie every single morning before work, and it started off my day in the best, healthiest way. I loved making soups and peanut butter and hummus. And I miss drinking all the juice!

My current house sit in Saltburn-by-the-Sea (my longest at a whole month!!) actually has a SUPER lit blender, so I’ve been taking full advantage of that and making smoothies and hummus and nice cream to my heart’s content. Which has made me SOOO happy, I can’t even tell you.

However, that’s not always the case, and I never know if the next place will have a blender/juicer or not. I’ve legit debated traveling with a blender because I miss it so much haha.

I really like having a cozy space with mood lighting and candles. Obviously I don’t think most places would be ok with me using their candles, and none have had string lights yet (but I have hope!!!). I actually purchased a small fairy light set that I now travel with haha, and I’ve really been enjoying using them before I wind down at night. I’m all about the #ambiance and just love having dim lights on and candles lit on a rainy day or cozy evening when I’m working on my blog instead of a bright overhead light glaring down at me.

THE EASE OF COOKING

I LOVE to cook, and would often spend time making things from scratch before I started traveling 24/7. However, it can be difficult to keep this up since many of the items I need come in larger jars, and of course I don’t want to keep purchasing and leaving them behind.

A lot of the places I’ve stayed also don’t have all the cooking appliances I liked to use, either (such as a blender or food processor), or don’t have extra jars to store excess food (I used to meal prep a lot, and don’t like spending a ton of time cooking if I’m not going to be able to get multiple meals out of it).

But again, since I’ve been at this house sit for a month it’s been SO NICE – I’ve been able to cook again, and store all my meals for the week without worrying that I won’t eat everything before I leave, haha. But there are some things I miss that I used to have on hand but don’t use often enough to justify buying – like Tamari sauce, various spices, etc.

But it’s been pretty damn close to the same – so I’m thankful for that. Plus I’ve saved so much more money by cooking instead of eating out!

But I do miss having all my cooking materials and utensils with me. However, it has forced me to get creative, so that’s an up side!

BEING HEALTHY AND WORKING OUT

Ok, this one’s mostly my fault, but I tend to get lazy if I’m working out on my own. I really like having a gym I can go to or classes I can take. I have been to a couple of yoga classes here though, which has been really nice!

I’ve definitely been eating healthier since I’ve been at these more recent house sits (the first near London for 2 weeks, and the second in Saltburn-by-the-Sea for a month) than when I was traveling before since I was moving more often. So that’s been good.

BEING MY MOST STYLISH SELF

It’s hard to pack all your fancy ishhhh in 2 bags. I miss having access to my full wardrobe! Although let’s be real, even when I did, I still wore the same 10 things LOL. I just like knowing I have the OPTION to be extra if I want!

Or that random night you go to a club and want to wear that super fancy dress and sky high heels. I definitely can’t justify bringing things like that with me, especially considering the fact that I’m RARELY ever at a club anymore, haha.

Having less stuff DOES make getting dressed a lot easier, though. But I do miss having random statement pieces that I only wore occasionally that could really pump up an outfit. Plus in all my winter travel photos I’m literally wearing the SAME SCARF lol – my friend and I started calling our outfits (we literally wore the same thing every day in winter) our ‘uniforms’.

ALL MY FACIAL STUFF

I am a litttle bit of a skincare nerd (ok, I’m a huge skincare nerd) and not being able to have all my creams and toners with me is killlling me. I know right, even I am rolling my eyes at myself, but I looooove a good skincare routine!

However, I do currently have a decent amount of products with me – but it is annoying to trek around so once I finish some of the bottles I won’t be purchasing more. However, in a way, I suppose this is a good thing – if I was stationary, I’d probably have an entire shelf dedicated to skincare lol. This probably keeps me from spending too much money…

I’ll be honest, I’ve been kind of sucking in that department. At home, I RARELY ever purchased any food in plastic, and cooked most of my meals so I wasn’t getting grab and go stuff.

But traveling makes that a little harder, and I will grab juices or only have the option of buying fruits/veg in plastic at the market. I know I could get better about finding local farmers’ markets, but when you’re only staying somewhere for a short while, you don’t have a ton of time to find all this info out – and you need food right when you arrive, which often doesn’t coincide with the same day as the farmer’s market.

I did try going to the farmer’s market here in Saltburn-by-the-Sea (which is held once a month haha) and there were only a couple of stands with fruits and vegetables! I was kind of bummed, because back in California, most sell fruits and veggies. However, here, it was mostly baked goods and catered items for sale.

Plus, I’m not gonna lie – I LOVE trying the regional foods! And sometimes this means chocolate bars, berries in plastic clamshells, or cheese in saran wrap. I do try my best to buy everything I can without plastic/wrapping, but I admit that I do fall short sometimes. I’ve been much better about that lately, but I know I could still be doing more.

However, I have been focusing on going to more local businesses and vegetarian places. I like to try and support establishments like that as much as I can, so that is something I try and make a priority. There’s a little market I found here in Saltburn that sells some local produce, so I’ve been hitting that up, too.

I really do miss having people around me that I know and love. I miss going out to eat with friends. I miss having someone to come home to at the end of a long day. I think this will change once I pick a destination that’s more of an expat/digital nomad hub – but for now, this is a major thing I miss. And obviously my family and friends from home in general! I’m typically the type of person that can be plopped down anywhere and be fine, and it’s pretty easy for me to make new friends (when I’m in the mood to put myself out there lol), but I miss having people that KNOW me, that I don’t have to constantly make introductions to. It can be quite socially exhausting.

Ok, so I know the whole point of traveling was to SHAKE UP my routine, but I definitely need to find more of a middle ground! When I started out, I planned to meditate, do yoga, morning pages, journal, etc. every morning…but that has NOT been happening!

Traveling kind of changes your entire routine, and if you’re a full time traveler, that can make everyday life totally different than what you’re used to. So having SOMETHING to help ground you can be really helpful. I do like that I don’t have free time 100% of the time – teaching helps me keep to a more regular schedule. I really like that, because otherwise I think I would just feel totally lost and afloat.

I know I sound like a broken record, but in the future, I’m planning to continue to travel A LOT slower – like ideally 1-6 months in each place. This will mean less flights to catch, so less money spent on extra baggage and less time spent hauling it around from place to place.

I also want to purposely pick house sits/AirBnbs that seem to have a good amount of coziness in a cute area. And take more time to research zero waste/bulk stores/local markets. I also REALLY want to carve out a morning/night routine so I feel a little more grounded/connected to myself.

We’ll see how it all goes!

If you’re a full time traveler, what do you miss having with you? Or just miss about staying in one place in general? 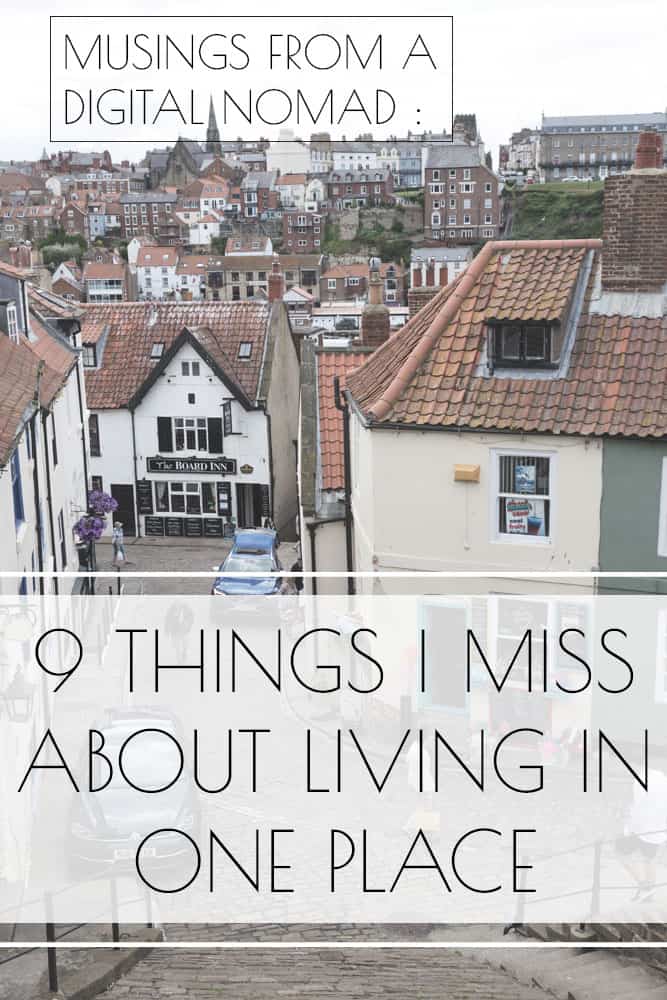